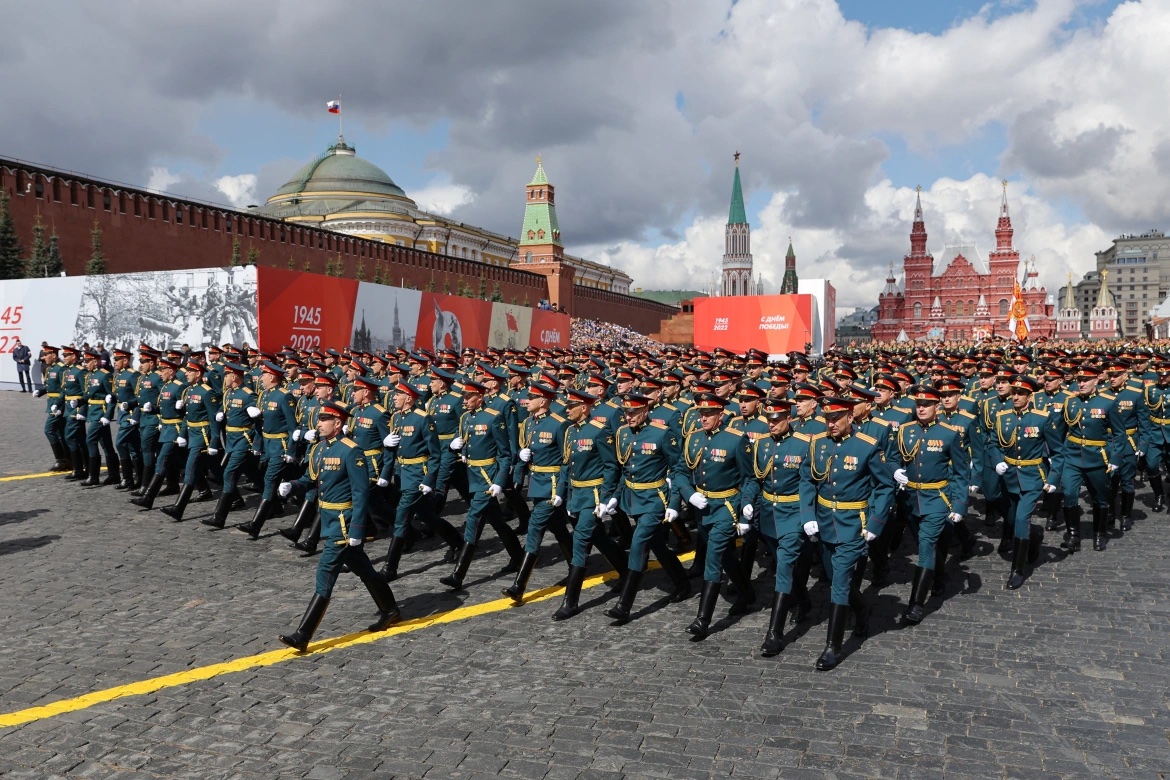 Russian President Vladimir Putin was among the first to arrive on Red Square where he greeted veterans of the Great Patriotic War.

Russia marked on Monday the 77th anniversary of the Soviet Union’s victory over Nazi Germany, with the Immortal Regiment marches taking place across the country.

Moscow’s Red Square saw the military parade featuring the country’s newest military equipment. The parade in the heart of Russia’s capital city brought together more than 11,000 servicemen and showcased over 131 pieces of military and special equipment. The airborne part was canceled due to unfavorable weather conditions.

In his speech, Russian President Vladimir Putin addressed to those involved in the “special military operation” in Ukraine.

“We are proud of the unbroken valiant generation of victors, that we are their heirs, and it is our duty to keep the memory of those who crushed Nazism,” President Putin said in his speech.

“I am addressing our Armed Forces and Donbas militia. You are fighting for our homeland, for its future, so that no one can forget the lessons of the second world war. So there is no room in the world for Nazis,” he added.

Since 1945, Russia has celebrated Victory Day with an annual massive military parade, recalling the Great Patriotic War, which began in 1941, when German Nazi forces hit the USSR. Germany’s attack took the country’s leadership and nearly 200 million inhabitants by surprise as Berlin violated the Molotov-Ribbentrop treaty, which supposed that neither country would attack the other.

But this year’s parade in Moscow comes amid Russia’s invasion of neighboring Ukraine — one of the deadliest conflicts in Europe since World War II. On February 24, Russia launched an all-out offensive in Ukraine, claiming that the assault was aimed at protecting the people of the separatist-controlled regions in Ukraine. The Kremlin said that the so-called “special military operation” aims to “denazify” Ukraine.

In his Monday’s speech, Russia’s president also blamed the West for the war in Ukraine, calling it a “preemptive attack” against NATO, which, according to him, was going “to invade lands which have historically been ours, including the Crimea.”

“We saw hundreds of foreign advisors beginning to work, the regular deliveries of the most modern weaponry from NATO countries, the danger grew with each passing day,” Putin said, adding that the decision to launch a special operation was “necessary, timely and the only choice.”

Some foreign officials speculated that Russia’s leader could use Victory Day to launch a full mobilization in the country or formally declare war in Ukraine, but no significant announcements were made.

According to the Global Firepower (GFP), Russia’s Armed Forces are the strongest in the Caspian region and one of the biggest in the world. According to the 2021 data, GFP identifies Russia as the world’s second strongest military among 140 countries worldwide, behind the United States. Russia’s defense budget for 2021 amounted to around $42 billion, while the US led the ranking with the highest military spending accounting for $740.5 billion. Russia’s strategic nuclear arsenal, however, remains the main pillar of the Great Power status.