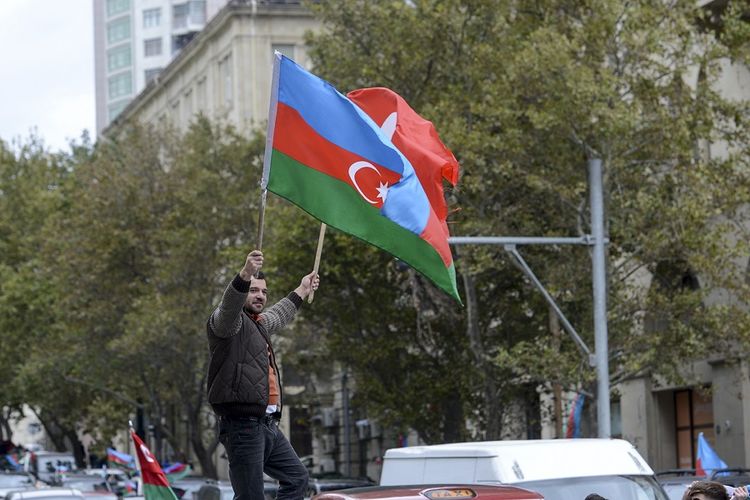 An Azerbaijani man raises Azerbaijani and Turkish flags after President Ilham Aliyev announced that Azerbaijani troops liberated Shusha, the main city in the Karabakh region of Azerbaijan that had been under Armenia's illegal occupation for three decades, Baku, Azerbaijan, November 8, 2020 / AP Photo

The United States has long been involved as one of the mediators for resolving the Armenia-Azerbaijan conflict since the early 1990s. Analysts say President Biden’s possible recognition of the so-called “Armenian genocide” can have serious implications for Washington’s foreign policy in the region, particularly for its relationship with Azerbaijan.

Following nearly three decades of ineffective peace negotiations mediated by the US, Russia and France, the conflict between Armenia and Azerbaijan escalated into a bloody war that lasted 44 days between September 27 to November 9, 2020. The war resulted in Azerbaijan regaining control of territories in its Karabakh region which were occupied by Armenia during the first bloody war in 1991-1994. A ceasefire mediated by Russia brought an end to the last year's hostilities and tasked Yerevan and Baku with restoring economic and transportation links.

Dr. Kadir Ertach Chelik, an advisor on the US-Turkey relations at the Turkish think-tank ANKASAM, believes that although Armenia does not currently have the capacity for reigniting the conflict, it can resort to arms in case it sees an opportunity to do so - a move can be produced by President Joe Biden's recognition of the so-called “Armenian genocide.”

“In this unfavorable geopolitical atmosphere, this move of the USA will encourage Armenia and will be interpreted by Yerevan as Washington's open support to Yerevan,” Chelik told Caspian News. “Having also the support of some European states and acting as their surrogate actor in the region, Armenia may again make a mistake.”

Chelik explained that the mistake would be igniting another war with Azerbaijan, which could lead to the strengthening of Turkey-Russia ties in the region and cause a rift in US-Azerbaijan relations.

Azerbaijan has been actively supporting the NATO missions in the Balkans and currently in Afghanistan. The number of Azerbaijani contingents serving in the non-combat NATO-led Resolute Support Mission stands at 120. The main task of the Azerbaijani peacekeepers in Afghanistan is to protect the security of the Kabul International Airport. Azerbaijan is the only country out of five Caspian Sea region nations and the only non-member Muslim-majority country that contributes to Resolute Support. The government in Baku currently provides ground and naval routes for roughly 40 percent of the international coalition’s fuel, food and clothing supplies bound for forces in Afghanistan.

The hydrocarbon reserves of Azerbaijan play an important role in strengthening the energy security of the US allies in the European Union. Natural gas from Azerbaijan is being supplied from the Caspian Sea to as far as Italy in the multi-billion Southern Gas Corridor mega pipeline. Ten billion cubic meters of natural gas is slated for European consumers annually.

Dr. Chelik says President Biden's recognition of the so-called "Armenian genocide" means ignoring the genocide and crimes committed by Armenians against Azerbaijani Turks, particularly in Khojaly. Thus, such a biased move can strain ties with Azerbaijan, the most rational regional player, and cause setbacks in the transfer of hydrocarbon reserves to Europe, while it could also lead to a deadlock in terms of facilitating NATO contributions in the region.

“[Recognition of the so-called genocide] could push Azerbaijan to get closer with more Eurasian actors, further enhance its relations with Russia, and be more integrated into China’s Belt and Road Initiative project. Consequently, the USA, which is in the losers club in the Middle East and Black Sea geopolitics, will be a loser in the Caucasus, as well,” Chelik explained.

The genocide of Azerbaijanis in the city of Khojaly took place during the First Karabakh War on February 26, 1992. Armenian forces killed 613 ethnic Azerbaijani civilians as part of their brutal ethnic cleansing policy. Video footage and photos from the crime scene went viral shortly after the mass killing of Azerbaijanis. However, many countries, including the US have not recognized the Khojaly massacre committed by Armenians against Azerbaijanis as a genocide.

Meanwhile, the authorities of Azerbaijan support Turkey’s stance on the so-called “genocide” claims of Armenia. Officials in Baku have disputed claims that alleged attacks on Armenians a century ago were acts of genocide.

Hikmet Hajiyev, Assistant to the President of Azerbaijan, Head of Foreign Policy Affairs Department of the Presidential Administration, said everyone knows Azerbaijan’s resolute and unequivocal position in relation to this issue and if such a step is taken by the new US administration, he says it will be a historic mistake.

“The recognition of the so-called "Armenian genocide" is a falsification of history. History should be studied by historians. If that happens, Azerbaijan will strongly condemn it,” Hajiyev said. “President Ilham Aliyev has repeatedly stated that any step against Turkey is against Azerbaijan, and any step against Azerbaijan is against Turkey. We would like to hope that the US administration will not make a historic mistake.”

Azerbaijani President Aliyev earlier said that the new U.S. administration's foreign policy for South Caucasus remains unclear to Baku. He said neither the American president nor other officials from his administration contacted the Azerbaijani authorities about regional developments. According to President Aliyev, Washington’s new government should deliver a balanced foreign policy in the region with regard to its relationships with Armenia and Azerbaijan as a Minsk Group co-chairing country.