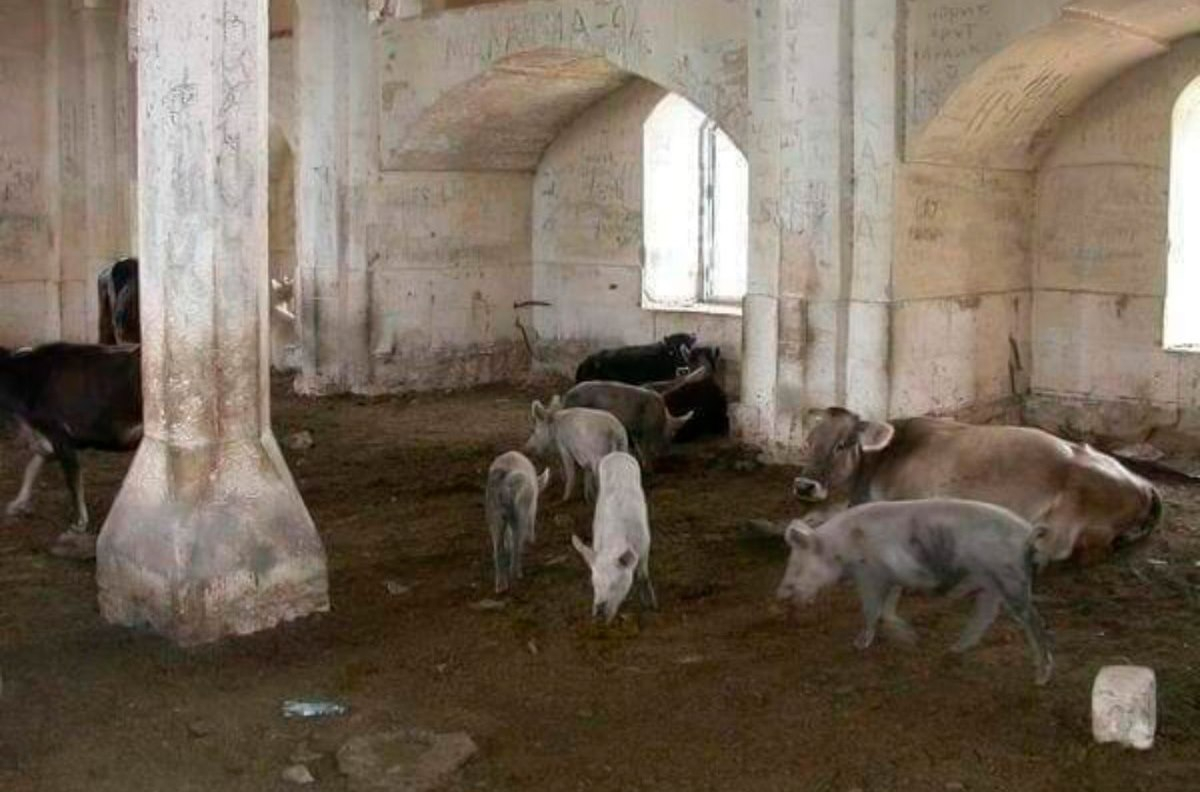 Armenians turned a mosque, a holy place for Muslims, in the Karabakh region of Azerbaijan into a barn for pigs and cattle during the years of occupation from the early 1990s to 2020. / Courtesy

The US Department of State has reported on Armenia’s vandalistic acts against the religious sites in Azerbaijani territories that were once occupied by Armenia.

“Examples of known damage to significant religious sites include the 19th-century Haji Alakbar Mosque in Fuzuli District, which was destroyed, and the Juma Mosque in Aghdam, which was vandalized with Armenian-language graffiti and whose mehrab (the niche in the wall that indicates the direction of Mecca) was riddled with bullet holes,” reads the report.

“Cemeteries throughout Aghdam were desecrated, looted, and/or destroyed, including the sacred and historic 18th-century tombs of Imarat Garvand Cemetery, the city’s “Martyrs’ Alley". Western diplomats visiting Martyrs’ Alley reported seeing holes where bodies were once interred, and that only one broken headstone remained in the cemetery. Because religion and ethnicity are closely linked, it is difficult to categorize many incidents as being solely based on religious identity," the report added.

According to the report, the scale of Armenian vandalism against the cemeteries where ethnic Azerbaijanis were buried is obviously seen in the photo documentation of world-renowned photographers.

“An international photojournalist, Reza Deghati, known professionally as “REZA,” documented the systematic destruction of dozens of Azerbaijani cemeteries in Fuzuli, Aghdam, Zangelan, Kelbajar, and Jebrayil. Graves were desecrated; in some instances, holes were dug out to rob graves, while other sites showed evidence of the destruction and exhumation by heavy construction equipment,” reads the document, adding that the remains from Azerbaijani graves were exhumed, and gold teeth removed, leaving skulls and bones strewn across Azerbaijani cemeteries or in some cases completely removed, while Armenian graves remained virtually undisturbed.

Cultural vandalism by Armenia was common in the once occupied Azerbaijani territories, and footage depicting mass destruction of the monuments during the years of occupation went viral after the liberation of the territories. Affected sites included mosques, memorials, museums, statues and more. The city of Aghdam, where the world’s Bread Museum was located, as well as the city of Fuzuli, were completely razed to the ground, now resemble ghost towns.

A part of Azerbaijan’s sovereign territory fell under Armenia's occupation in a war that ensued from the latter's illegal claims to historical Azerbaijani lands. Following the dissolution of the Soviet Union, Armenia launched a full-fledged armed attack on Azerbaijan's Karabakh region. The bloody war in 1991-1994 resulted in Armenia occupying 20 percent of the internationally recognized territories of Azerbaijan.

Over 30,000 ethnic Azerbaijanis were killed, and one million others were expelled from those lands in a brutal ethnic cleansing policy conducted by Armenia. The houses, cemeteries, religious sites, and social infrastructure left after the expulsion of indigenous Azerbaijanis were subjected to unforeseen vandalism by Armenians accompanied by mass destructions and plunder.

On September 27, 2020, the Armenia-Azerbaijan conflict took a violent turn when Armenia’s forces deployed in occupied Azerbaijani lands shelled military positions and civilian settlements of Azerbaijan. During counter-attack operations that lasted 44 days, Azerbaijani forces liberated over 300 settlements, including the cities of Jabrayil, Fuzuli, Zangilan, Gubadli, and Shusha, from nearly 30-year-long illegal Armenian occupation. The war ended with a tripartite statement signed by Armenia, Azerbaijan, and Russia on November 10, 2020. Under the agreement, Armenia also returned the occupied Aghdam, Kalbajar, and Lachin districts to Azerbaijan.

According to data compiled by the Ministry of Culture of Azerbaijan, based on the statistics from the early 1990s, some 2,625 monuments were registered in the occupied territories, of which 706 were protected by the state. Hundreds of cultural institutions, including 927 libraries with 4.6 million books, 808 palaces of culture, clubs, and houses of culture, 85 music and art schools, 22 museums and museum branches with more than 100,000 exhibits, four art galleries, four theaters, two concert halls, eight cultural and recreation parks have been destroyed and looted.

One of the world’s oldest human settlements in the Khojavend district - the Azykh cave; the Shusha State Historical-Architectural Reserve and Govhar Agha Mosque in the same city, Aghdam's Bread Museum and Drama Theater, hundreds of other mosques, cultural and social infrastructure buildings in Aghdam, Fuzuli, Jabrayil, Zangilan, Gubadli, and other districts have been targeted by Armenian vandalism, as well. Mosques were transformed into barns for pigs and cattle during Armenia's occupation of Azerbaijani territories.

Aghdam is dubbed as "Hiroshima of the 21st Century" and "Hiroshima of the Caucasus" by international journalists and researchers. Azerbaijan's President Ilham Aliyev has personally highlighted the massive destruction in the cities of Aghdam, Fuzuli, Jabrayil, Zangilan, and Gubadli during his visits to the liberated districts.

Azerbaijan’s state-run space agency Azercosmos has implemented 27 projects in the Karabakh and East Zangazur regions for obtaining through Azersky satellite data about the damages to multiple facilities of various designations in 889 settlements in the liberated administrative-territorial units. The company has also prepared schematic materials to document the pre-war state of the settlements.