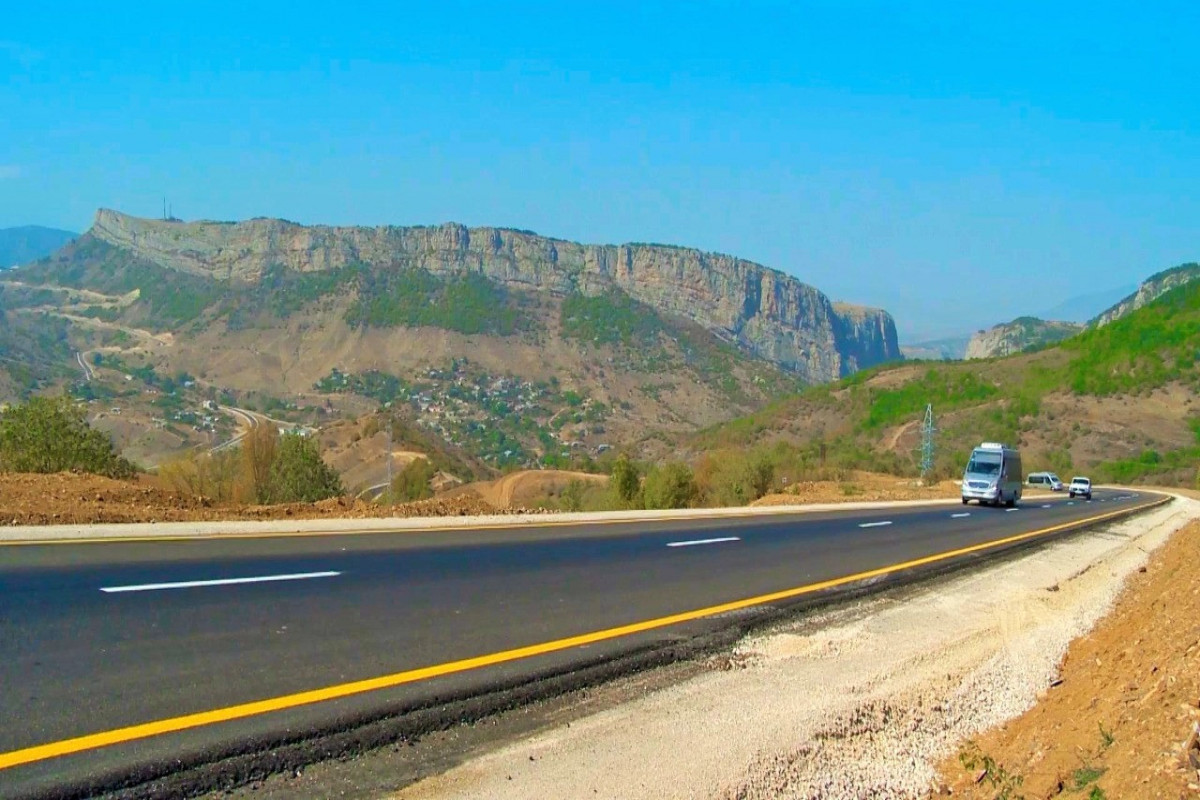 One of the new highways, dubbed "Victory Road", in the Karabakh region of Azerbaijan. The road connects Azerbaijan's capital Baku with its cultural capital Shusha / Courtesy

The liberation of Azerbaijan’s territories from Armenian occupation is supporting the further development and expansion of the intercontinental TRACECA transport corridor, according to Azerbaijan’s Digital Development and Transport minister.

Nabiyev said the restoration of transport and economic links after the last year’s 44-day war, as a result of which the Azerbaijani territories were liberated from Armenian occupation, would contribute to the further development and expansion of the TRACECA corridor. He hinted at the completed and ongoing infrastructure and transport projects implemented by the Azerbaijani government, such as airports, highways, railways, logistic centers, industrial and agro parks, and etc.

Highways and railways are seen as the blood vessels of the Transport Corridor Europe-Caucasus-Asia, abbreviated to TRACECA. The State Agency of Azerbaijan Automobile Roads is currently implementing ten highway projects in the Karabakh and East Zangazur regions of Azerbaijan. The total length of the roads is 665 kilometers. The new highway grid will enable faster and shorter connections among the liberated regions, while it also shortens the travel from capital Baku in terms of both time and distance.

Established in Brussels in 1993, TRACECA stretches from Shanghai in China to Frankfurt in Germany, being acknowledged as one of the modern twists of the ancient Eurasian trade and transport corridor, the Great Silk Road. TRACECA aims to strengthen economic relations, trade, and transport cooperation in the regions of South Caucasus and Central Asia by connecting them with Europe in the shortest transport corridor. It also helps the EU implement the programs for the development of the economies of TRACECA countries, ten of which have once been part of the Soviet Union, including Azerbaijan.

Azerbaijan has been contributing to TRACECA with its well-organized transport infrastructure, including the land, rail and maritime routes. Cargo from Central and South-East Asia easily reaches Europe on a modern highway that stretches over 500 kilometers from the capital Baku to the country’s border with Georgia. The railway's focal point is the Baku-Tbilisi-Kars (BTK) railway, an 826-kilometer route that was launched in October 2017 and connects Azerbaijan, Georgia and Turkey. Since its establishment four years ago, the railway carried more than one million tons of cargo. The figures are expected to ultimately reach 17 million tons per year when the railroad is in full swing.

The portion of Azerbaijan’s railway infrastructure in the liberated territories is being revived after nearly 30 years of Armenia’s illegal occupation. The Azerbaijani government mobilized all efforts to reintegrate the war-torn lands into the country’s economy and restoration of destroyed railway links in addition to the construction of new lines is one of the highest priorities. The use of the transport potential of the Karabakh and East Zangazur regions is said to increase Azerbaijan’s game-changer role in the realization of the North-South and East-West transport corridors, as well as TRACECA.

The Azerbaijan Railways Company is currently implementing multiple railway projects in the liberated lands. An all-new railway link is being laid between the capital Baku and Azerbaijan’s cultural capital city of Shusha in the Karabakh region.

The Horadiz-Aghband railway, which stretches to the Azerbaijan-Armenia border and is supposed to merge with the Zangazur Corridor, is being restored. The Zangazur Corridor, a strategic route through the territory of Armenia, will enable the shortest connection between Azerbaijan’s mainland and its exclave of Nakhchivan. The launch of the multi-modal corridor is said to benefit all regional nations and contribute to the Eurasian trade and transport communications that incorporate the regional economies with a potential nominal GDP of $1.1 trillion. Chinese authorities are convinced that the Zangazur Corridor will contribute to the implementation of the Belt and Road mega project.

In addition to the overland transport network, civil aviation is also being revived in the liberated lands of Azerbaijan.

The Fuzuli International Airport, located in the district of Fuzuli, is the first new top-notch civil aviation hub in the liberated Karabakh region. The airport, which already began operations, was already assigned a three-letter international geocode - FZL by the International Air Transport Association (IATA) and the UBBF code by the International Civil Aviation Organization (ICAO). Its runway, measuring 3 kilometers in length, is designed to receive all kinds of aircraft, including large cargo planes and small-sized private jets. The airport terminal can handle at least two hundred passengers per hour, while the apron can accommodate eight airplanes simultaneously, measuring 60,000 square meters (645,000 square feet) in size.