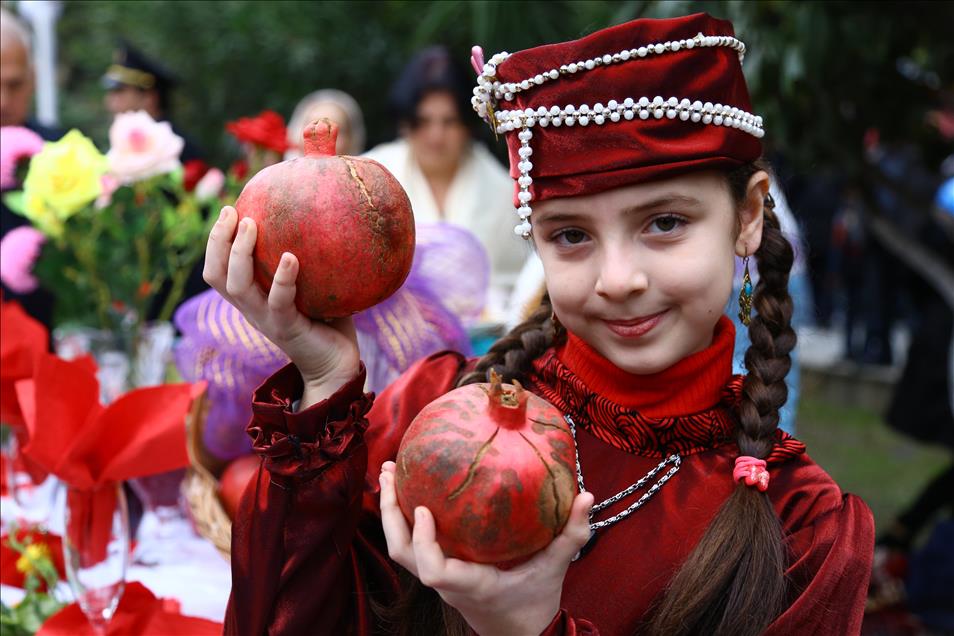 Nar Bayrami is a lavish pomegranate festival that held annually on the first weekend of October, which marks the end of harvesting, in Azerbaijan’s central district of Goychay since 2006 / Resul Rehimov / Anadolu Agency

UNESCO congratulated Azerbaijan on the recognition of a new inscription from the Caspian country in the world’s major compilation of intangible heritage examples from around the world.

Nar Bayrami is a lavish pomegranate festival that held annually on the first weekend of October, which marks the end of harvesting, in Azerbaijan’s central district of Goychay since 2006. The festivity rose to fame as an internationally popular event shortly after its introduction. Pomegranate aficionados from around Azerbaijan and the world flock to Goychay, 224 km (139 mi) west of the country’s capital Baku, to dip into the unique atmosphere of the pomegranate extravaganza.

The festival puts on display various sorts of pomegranate cultivated exclusively in Azerbaijan. Veles, Shirin, Guloysha, Shikhbaba, Bala Mursal, Mehseti, and the legendary “black pearl” are considered the most famous and tastiest varieties grown in the country. “Black pearl” is pomegranate with a tart flavor that resembles the old French wine.

Nar Bayrami is also a haven for gourmet food enthusiasts who seek new tastes hidden in jams, sauces, and drinks made from pomegranate, such as narsharab – Azerbaijan’s signature sour-sweet sauce of ruby red color offered in thick and liquid versions. The sauce perfectly complements the fish and meat dishes. Nardancha or pomegranate jam next to a cup of freshly brewed black Azerbaijani tea in traditional “armudu” glass (narrow, pear-shaped glass) is what a foodie is ready to go after from East to West.

In addition to the pomegranate festival, Azerbaijan is honored in the renewed Intangible Heritage List of UNESCO with the art of miniature which is represented as a common heritage of Azerbaijan, Turkey, Iran, and Uzbekistan. UNESCO added a total of eighteen inscriptions to the list from around the world, including Sa'eed handmade weaving from Egypt, Yeondeunghoe lantern lighting festival South Korea, Zlakusa hand-wheel pottery making from Serbia, Hawker culture from Singapore, Charfia fishing from Tunisia, Budima dance from Zambia, Chamamé music and dancing from Argentina and etc.

With the inscription of Nar Bayrami and art of miniature, Azerbaijan is currently represented in the UNESCO Intangible Heritage List by fifteen elements. The country’s name first appeared in 2008 with the inclusion of Mugham, a folk musical composition. Since then, UNESCO sealed the traditional carpet weaving, Chovqan horse-riding game, traditional art and symbolism of Kelaghayi, copper craftsmanship of Lahij village, Yalli dance, dolma dish making and others as the intangible heritage of humanity from Azerbaijan.