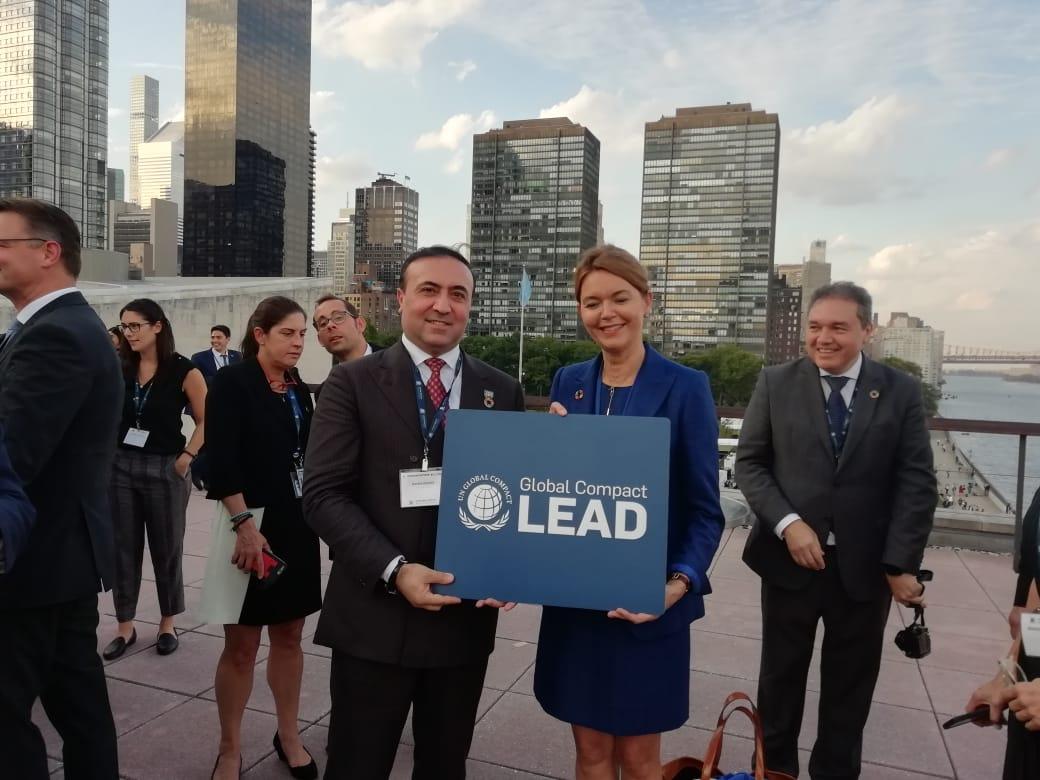 SOCAR AQS has been announced a LEAD company, one of the world’s 36 companies of its kind, following its firm commitment to the UN Global Compact this year, which involves reporting on the Sustainable Development Goals and encouraging other stakeholders to be involved in corporate reporting / Courtesy

SOCAR AQS was given recognition from the UN, thanks to its commitment to the Ten Principles of the UN Global Compact and the application of the UN Sustainable Development Goals in its growth strategy over two years since joining the compact.

"LEAD companies represent the highest level of engagement with the UN Global Compact,” Lise Kingo, CEO and Executive Director of the UN Global Compact, said at the event in New York on September 24, according to Prnewswire.com. “More than ever before, the world needs responsible businesses — like the ones announced as LEAD today — that continuously work to improve their sustainability performance and take action to build a better world."

Global Compact LEAD companies are selected annually for their active engagement as a participant in the United Nations Global Compact - a voluntary initiative aimed at implementing universal sustainability principles and contributing to support UN goals.

Eligibility for a LEAD acknowledgment addresses active participation in at least two UN Global Compact Action Platforms for demonstrating the company’s interaction with the UN Global Compact. A LEAD company should also prove its commitment to identifying and promoting leadership practices in line with the Ten Principles and leveraging the SDGs in its activities.

SOCAR AQS has been announced a LEAD company, one of the world’s 36 companies of its kind, following its firm commitment to the UN Global Compact this year, which involves reporting on the Sustainable Development Goals and encouraging other stakeholders to be involved in corporate reporting.

Azerbaijan has become the second country from the Caspian Sea region to have added to the LEAD list, following Russia. SOCAR AQS is the second oil and gas company from both the Caspian and Commonwealth of Independent States regions to get a LEAD title, next to the Sakhalin Energy Investment Company of Russia. Globally, the Azerbaijani company is the fifth LEAD Company from the oil and gas industry, along with counterparts from Russia, China, France and Italy.

Created in 2007, SOCAR AQS is a joint venture between SOCAR and Nobel Oil Services, a diversified group of companies, which provides drilling, construction and project management as well as equipment maintenance, procurement and enhanced oil recovery services in the oil and gas industry. Nobel Oil Services group of companies has been financing and supporting various technology and innovation projects in the region.

Earlier this year, Nobel Oil Services for the first time in the oil and gas industry in the South Caucasus has obtained ISO 37001:2016 Anti-Bribery Management Systems (ABMS) certification, which is an important part of Ethics & Compliance, by applying the first international standard in the area of anti-bribery and corruption management system. ABMS certification assures the prevention, detection and response to any corruption and bribery by putting in place the best international practices on anti-bribery controls. The certificate was awarded upon the result of an audit by LRQA, a part of UK-based Lloyd's Register Group Limited, which operates in 120 counties and serves 45,000 customers worldwide.