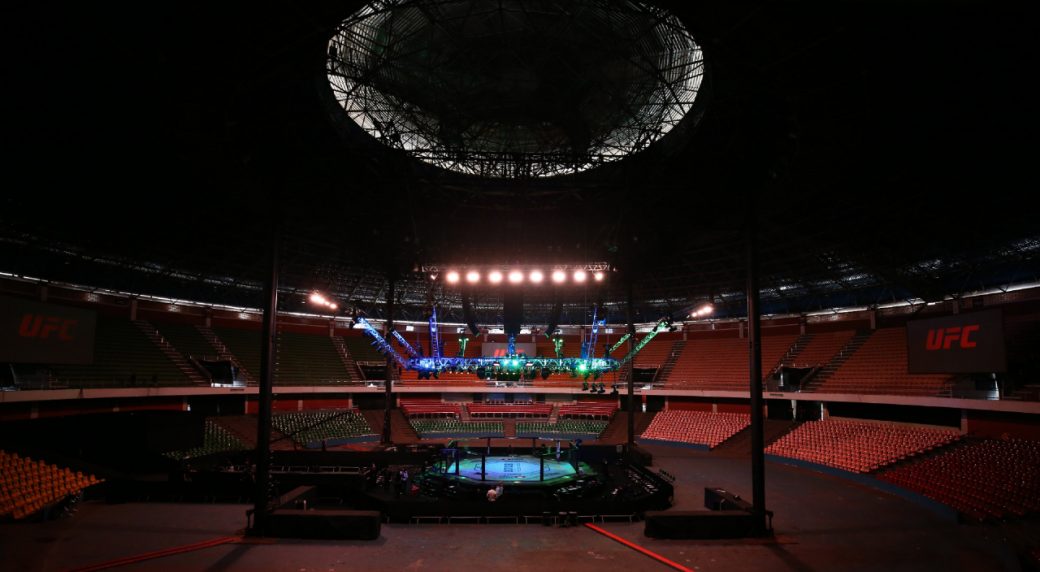 Last Friday, officials in UFC announced that all UFC events have been postponed indefinitely after UFC’s broadcast partner ESPN and parent company Disney expressed their concerns over the UFC 249, the fight that was originally scheduled to take place in Lemoore, California on April 18. / UFC/Twitter

A mixed martial arts (MMA) event, produced by the Ultimate Fighting Championship (UFC) and scheduled to take place in Kazakhstan this summer, could be moved to a private island due to the novel coronavirus pandemic, or COVID-19.

The event, promoted as the UFC Fight Night 176, was set to take place on June 13 in Nur-Sultan for the first time in the 27-year history of the tournament, with Marlon Moraes from Brazil and Petr Yan from Russia scheduled to participate in the bantamweight bout.

Last Friday, officials in UFC announced that all UFC events have been postponed indefinitely after UFC’s broadcast partner ESPN and parent company Disney expressed their concerns over the UFC 249, the fight that was originally scheduled to take place in Lemoore, California on April 18.

‘‘While the organization was fully prepared to proceed with UFC 249, ESPN has requested the postponement of the event and subsequent bouts until further notice in light of the COVID-19 pandemic,’’ reads a statement issued by the world’s largest mixed martial arts organization.

The organizers of the prestigious tournament, however, are eager to get fights going again within a month, according to UFC President Dana White who said on Sunday that the organization was working to design a ‘‘fight island’’ to stage MMA events.

‘‘All the infrastructure is being built right now and getting put in place. [...] So, once that’s all in place – we’re looking at like a month – I’ll have that all put together, and guys can start training and can go there,’’ UK-based newspaper The Sun quoted White as saying.

No additional details were provided about the location of the island where the upcoming fight will be held and UFC has not made any official statements regarding the issue.

Meanwhile, the government of Kazakhstan has already postponed or canceled many international events originally scheduled to take place in what is Central Asia’s largest country. The list of the canceled events includes the Fed Cup Asia/Oceania Group I event — a prestigious tennis competition, and the Asian Water Polo Championship.

Government officials also urged Kazakhstani athletes to refrain from participating in sporting events hosted by countries where coronavirus has spread.

The rapidly spreading COVID-19 virus, which originated in the Chinese city of Wuhan, has already infected two million people and killed more than 126,000 across the world since last December, according to an interactive map from Johns Hopkins Center for Systems Science and Engineering.

Over 1,275 people across Kazakhstan are confirmed to have contracted the COVID-19 virus, while 15 deaths have been recorded, according to the latest case numbers released on Wednesday.