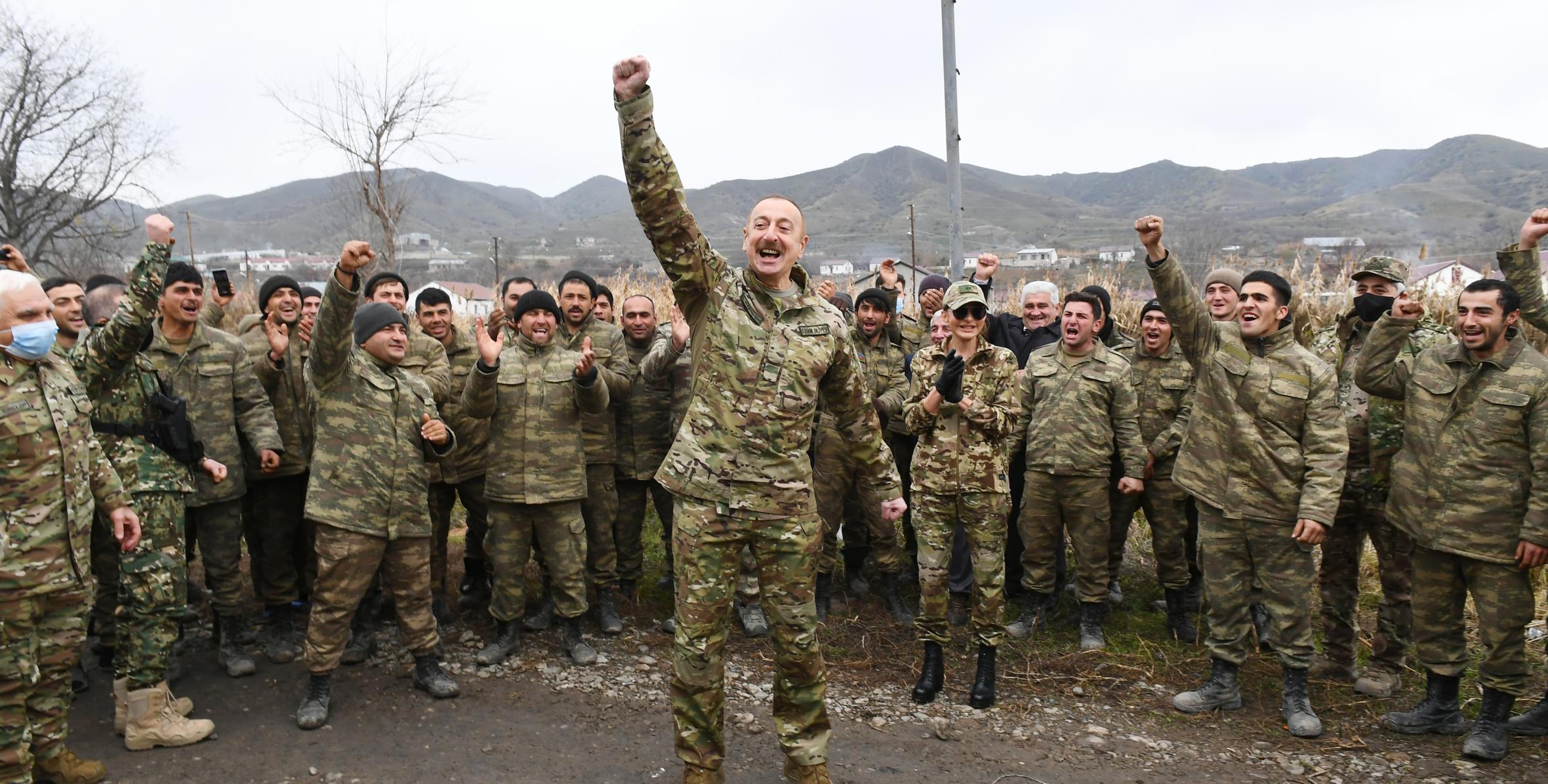 Today, Azerbaijan marks Remembrance Day, honoring the memories of the heroes who lost their lives fighting in the Second Karabakh War, also known as the “Patriotic War.”

The war, which lasted 44 days in 2020, saw Azerbaijani forces liberate the lands from nearly three decades of illegal occupation by Armenia.

Armenia and Azerbaijan had been in an armed conflict over Azerbaijan's Karabakh (Garabagh) region since the early 1990s when Armenia launched full-blown military aggression against Azerbaijan. The bloody war lasted until a ceasefire in 1994 and saw Armenia occupying 20 percent of Azerbaijan’s internationally recognized territories. Over 30,000 Azerbaijanis were killed, and one million were expelled from those lands in a brutal ethnic cleansing policy conducted by Armenia.

Armenian authorities failed to fulfill the UN Security Council's four resolutions demanding the immediate complete and unconditional withdrawal of the occupying forces from the Azerbaijani lands and the return of internally displaced Azerbaijanis to their native lands. The lack of international pressure on Armenia and three decades of ineffective mediation by the OSCE Minsk Group resulted in a dead-end in fetching a lasting solution to the conflict.

Despite consecutive calls Azerbaijan made on regional and international platforms for a political solution to the conflict, neither Armenia nor the global community took necessary measures. As a result, illegal occupation lasting for decades, as well as Armenia’s aggressive “new war for new lands” doctrine, pushed the conflict toward an inevitable military clash.

A threat of a new war emerged as Armenia refused to put an end to the conflict diplomatically, regularly fueling provocative rhetoric and staging sabotage and infiltration attempts. Armenia deliberately disrupted the negotiations and created obstacles by making unacceptable demands and undermining the format of negotiations that had already existed for over 20 years. Armenian Prime Minister Nikol Pashinyan's provocative remarks and attempts to change the format of negotiations thwarted all efforts to resolve the conflict peacefully.

In August 2019, Pashinyan visited the occupied Azerbaijani region, where he delivered a provocative speech saying "Artsakh [the name Armenia uses to refer to Karabakh] is Armenia. Period." He also urged for a so-called unification between Armenia and the Karabakh region by reviving the notorious “miatsum” (unification) slogan, which was used by Armenian nationalists during the First Karabakh War.

In July 2020, short but bloody hostilities broke out on the Armenia-Azerbaijan border near the latter's western Tovuz region. According to Armenian military analyst, Van Hambardzumyan, the Armenian side triggered the clashes by shooting at Azerbaijani servicemen patrolling along the frontier. Intensive skirmishes resulted in the deaths of 12 Azerbaijani servicemen, including a major-general and a colonel, and one civilian.

Shortly after the border incident, the Armenian military dispatched a sabotage group to infiltrate the Azerbaijani positions in the western Goranboy district. Azerbaijani servicemen foiled the attempt and captured the sabotage-reconnaissance group’s commander, Lieutenant Gurgin Alberyan, who admitted to the crime.

On September 27, 2020, the decades-old conflict between the two countries ultimately spiraled after Armenia’s forces deployed in the occupied Azerbaijani lands shelled military positions and civilian settlements of Azerbaijan. Azerbaijani forces took immediate counter-measures to push back the offensive. The Defense Ministry of Azerbaijan announced the start of counter-offensive operations “to prevent the combat activity of the enemy troops and secure the safety of civilians” coming under fire.

During the 44-day counter-attack operation, dubbed “Iron Fist,” Azerbaijani forces liberated over 300 settlements, including the cities of Jabrayil, Fuzuli, Zangilan, Gubadli, and Shusha. The ultimate blow to the resistance of the Armenian troops was the liberation of the Shusha city on November 8. The city’s liberation after 28 years of occupation was said to be crucial in the retreat of the Armenian forces and the end of hostilities. The war ended in a tripartite statement signed on November 10, 2020, by Armenia, Azerbaijan, and Russia. Under the statement, Armenia also returned the occupied Aghdam, Kalbajar, and Lachin districts to Azerbaijan.

“It is a historic day for our country today,” President Ilham Aliyev said following the signing of the document, adding that an end was being put to the conflict.

“We have destroyed almost all of their [Armenia’s] military hardware. We have breached the fortifications they had built for 30 years. Our soldiers have broken through them like lions. They have crushed the enemy and were right to do so because they are on their land. We abide by international law. We respect international law,” he added, saying the tripartite statement was “actually tantamount to Armenia's military capitulation”.

While the ceasefire signed in 1994 ushered in an unsettled status quo, the outcomes of the 2020 war established an all-new reality in the region. The Azerbaijani authorities have repeatedly stated that the conflict is irreversibly over, paving the way for joint efforts to reach a peace agreement between Azerbaijan and Armenia based on mutual recognition of each other's sovereignty and territorial integrity.

The tripartite statement sets conditions for the restoration of all economic and transport links in the region. Armenian authorities have assumed to guarantee the safety of transport links between the western regions of Azerbaijan and the Nakhchivan region, an Azerbaijani autonomous exclave in the southwest of the country. Nakhchivan is supposed to be linked to Azerbaijan’s mainland via an all-new route called Zangazur Corridor. Azerbaijan, in turn, will open its territory for ensuring railway links between Armenia and Russia, as well as Armenia and Iran.

However, the Armenian authorities have been rejecting negotiations on the opening of the corridor. On the contrary, since May 2021, Yerevan has repeatedly provoked new clashes on the state border with Azerbaijan. In November 2021, the Azerbaijani military prevented hundreds of armed Armenian servicemen from crossing the state border.

Subsequently, Baku called on Yerevan to immediately launch negotiations for the delimitation and demarcation of the borderline, and in February 2022, Baku submitted to Armenia a proposal containing five basic principles related to the peace negotiations between the two countries. Baku and Yerevan further agreed to set up joint working groups that should work on the issues related to the delimitation and demarcation of the Armenia-Azerbaijan borderline. On May 24, 2022, the first meeting between the border commissions of Azerbaijan and Armenia took place on the interstate border.

The European Union mediated three additional meetings between the Azerbaijani and Armenian leaders to expedite the normalization process, which involves peace talks, border delimitation, and the reopening of transport links. The latest round of talks in Brussels on August 31 resulted in an agreement between President Aliyev and PM Pashinyan on advancing discussions on a future peace treaty, as they agreed to task foreign ministers of both countries to start working on draft texts of the peace treaty.

However, the tensions on the Azerbaijan-Armenia border escalated again earlier this month following Armenia’s offensive and sabotage attempts. On the night of September 12 to 13, the Armenian military and sabotage groups attacked the Azerbaijani military and civilian positions. Saboteurs planted hundreds of landmines in the territories and supply routes controlled by the Azerbaijani troops. The retaliatory measures of the Azerbaijani army forced the enemy to retreat losing manpower and military equipment. The Azerbaijan Armed Forces lost 80 servicemen in the bloody flare-up of tensions.