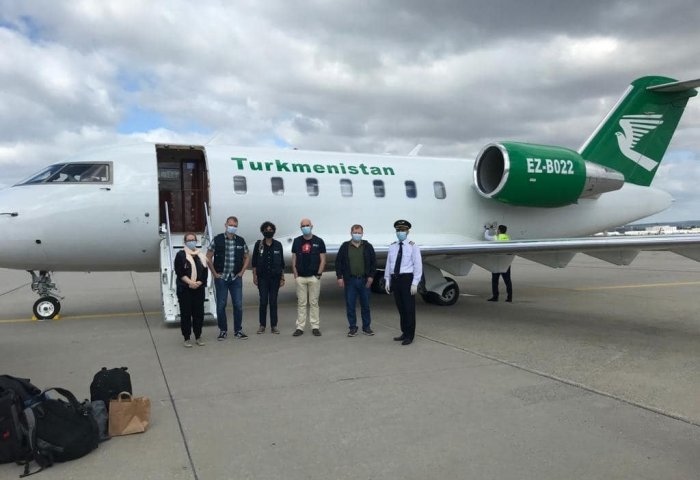 A team of five health experts and epidemiologists traveled to Ashgabat at the request of the Turkmen government for a 10-day visit. / Akipress.com

A team of World Health Organization (WHO) officials arrived in Turkmenistan on Tuesday to help Central Asia’s country assess the risks and develop the response measures required to tackle the novel coronavirus, WHO’s Regional Office for Europe has revealed.

A team of five health experts and epidemiologists traveled to Ashgabat at the request of the Turkmen government for a 10-day visit.

‘‘Together with the Turkmen Government we have overcome complex travel challenges, and we are very glad we managed to reach the country today,” said Catherine Smallwood, Senior Emergency Officer at the WHO’s Regional Office for Europe, who also leads the mission.

“We look forward to working hand in hand with national and local authorities to find the best solutions to protect the health of Turkmen people from COVID-19,” she added.

The WHO’s experts are expected to work closely with local health authorities in areas such as surveillance, laboratory services, patient management, infection prevention and control, risk communication, and community engagement. The mission is also to visit health-care facilities, public health centers, laboratories, emergency centers and other facilities across Turkmenistan.

In recent months, the WHO sent around 70 missions to assist COVID-19 responses in various European countries. The organization had earlier planned to send a mission to Turkmenistan in April, but the trip was postponed due to travel restrictions imposed.

WHO officials have said that the coronavirus pandemic is currently accelerating with 12 million cases reported across the globe. Turkmenistan is among the few countries that has not reported a single coronavirus case so far.

Turkmenistan, which is considered as Central Asia’s third-largest economy behind Kazakhstan and Uzbekistan, has a population of slightly more than 6 million people. While the government officials in Ashgabat insist the country does not have COVID-19 cases, it suggest that some viruses ‘‘might be transported by toxic dust storms’’ formed of lakebed sediments of the Aral Sea.

In a statement issued earlier this week, Turkmenistan’s foreign ministry claimed the government has taken several measures to prevent the spread of the disease in the country from the early stages of the outbreak.

“Dust and salt storms carrying particularly harmful substances from the bottom of the shrinking Aral Sea spread over thousands of kilometers and pose a real danger to humans,” reads the document published on the ministry's website earlier this week.

According to the Turkmen government, the country has implemented restrictions and preventative measures along its borders, while it has claimed that residents and citizens are regularly being tested.

In its statement, the foreign ministry also said the country supports the recent announcement made by more than 200 scientists across the world, which called for the WHO to acknowledge that the deadly virus can spread in the air.

Meanwhile, some experts and officials have repeatedly cast doubt on the Turkmen government’s statements on the epidemiological state in the country.

On June 23, officials at the United States embassy in Ashgabat issued a statement expressing their concerns over the situation. The document revealed that the embassy was repeatedly notified of local citizens with symptoms consistent with COVID-19 undergoing testing and being placed in quarantine in infectious diseases hospitals for up to 14 days.

The Turkmen government immediately responded to the statement, denying the allegations and urging not to disseminate ‘‘biased and unsubstantiated information".

‘‘The Ministry of Foreign Affairs of Turkmenistan emphasizes the invalidity and partiality of such informational fakes,’’ ministry said in its statement.