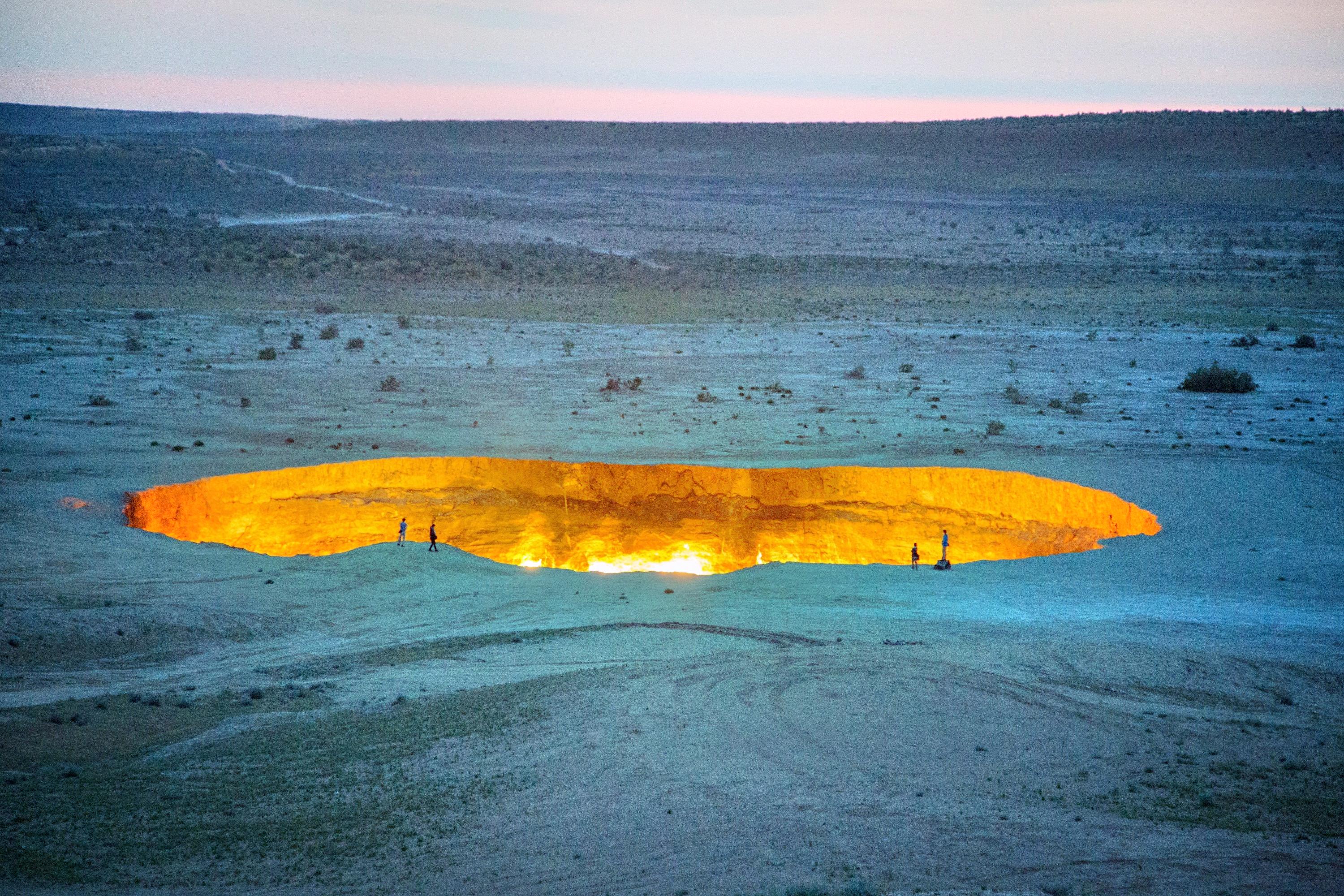 "Darvaza" or "Gate to hell" gas crater in Turkmenistan proves the country sitting on mammoth natural gas reserves. The fire pit has been burning non-stop for over five decades / Courtesy

The agreement between Azerbaijan, Iran and Turkmenistan on a natural gas swap deal for up to 2 billion cubic meters of Turkmen gas is expected to take effect early 2022, Iran’s oil minister Jadav Owji confirmed.

“The size of the swap contract is 1.5 to 2 billion cubic meters of natural gas annually, with which we can also use to help the stability of the natural gas network of the northern parts of the country in the cold season of the year,” Owji said in an interview with Tasnim News Agency, per Iran Front Page.

The deal, under which the natural gas will be supplied from Turkmenistan to Azerbaijan through Iranian territory, was backed by the presidents of the three Caspian countries during the 15th Summit of the Economic Cooperation Organization in the Turkmen capital city of Ashgabat on November 28, 2021. At that time, the supplies were reportedly due on December 25, 2021.

The open-ended agreement addresses annual exports of up to 2 billion cubic meters (bcm) of Turkmen gas to Azerbaijan via Iran’s territory. Under the swap deal, Iran will receive gas from Turkmenistan and deliver an equivalent amount to Azerbaijan at the Astara border. The gas that Iran will receive from Turkmenistan under the swap agreement will cater to the needs of at least five northern provinces of the country. Azerbaijan will reportedly receive 5-6 million cubic meters of new energy supplies per day.

The contract also helps Iran and Turkmenistan find common ground to resolve a gas debt dispute dating back to 2016 when Ashgabat claimed that Tehran should have paid $1.5 billion for gas it supplied from Turkmenistan. Iranian authorities have been disputing the figure. In 2017, Turkmenistan halted gas deliveries to Iran over the debt scandal.

Iran has the world’s second-largest reserves of natural gas after Russia. With most of its major gas fields concentrated in the country’s south, supplies from neighboring Turkmenistan since 1997 helped Tehran meet part of the energy demand in its northern provinces, which surges especially during the winter seasons.

Turkmenistan owns the world’s fifth-largest proven natural gas reserves of 7.5 trillion cubic meters, according to 2018 data compiled by the US government. However, the country has been falling short on multiple export options despite vast reserves. The largest buyer of the Turkmen gas is China through the Central Asia-China pipeline, which carried 290 bcm of gas to the Asian giant since 2009. Kazakhstan and Uzbekistan received a total of 46 bcm over the same period.

In 2019, Ashgabat resumed gas flows to Russia after three years of deadlock. Before Russia completely halted imports from Turkmenistan in 2016, around 50 bcm of Turkmen gas reached the Russian markets annually.

Ashgabat was hoping to supply 33 bcm of gas annually to three more Asian buyers on the Turkmenistan-Afghanistan-Pakistan-India (TAPI) pipeline, however, the hopes were dashed as the pipeline did not come online even in 2021, four years later than its planned inception in 2017.

Swap gas supplies from Turkmenistan is not a game-changer factor for Azerbaijan which owns 1 trillion cubic meters of proven gas reserves and produces enough natural gas commodities to meet domestic needs and export to foreign markets. In the first ten months of 2021, 26.4 bcm of natural gas has been produced in the country.

Luke Coffey, Director of Foreign Policy at Washington-based The Heritage Foundation, believes that supplies from Turkmenistan will help Azerbaijan increase its European exports on the Southern Gas Corridor (SGC) pipeline. He explains it with part of the swap gas going to the Nakhchivan exclave of Azerbaijan and subsequently releasing a certain amount of Azerbaijani gas from domestic supplies, which can be added to the 16 bcm of the annual volume of the SGC.