Turkmenistan to Reinforce Military Presence on Border Amid Insecurity in Afghanistan 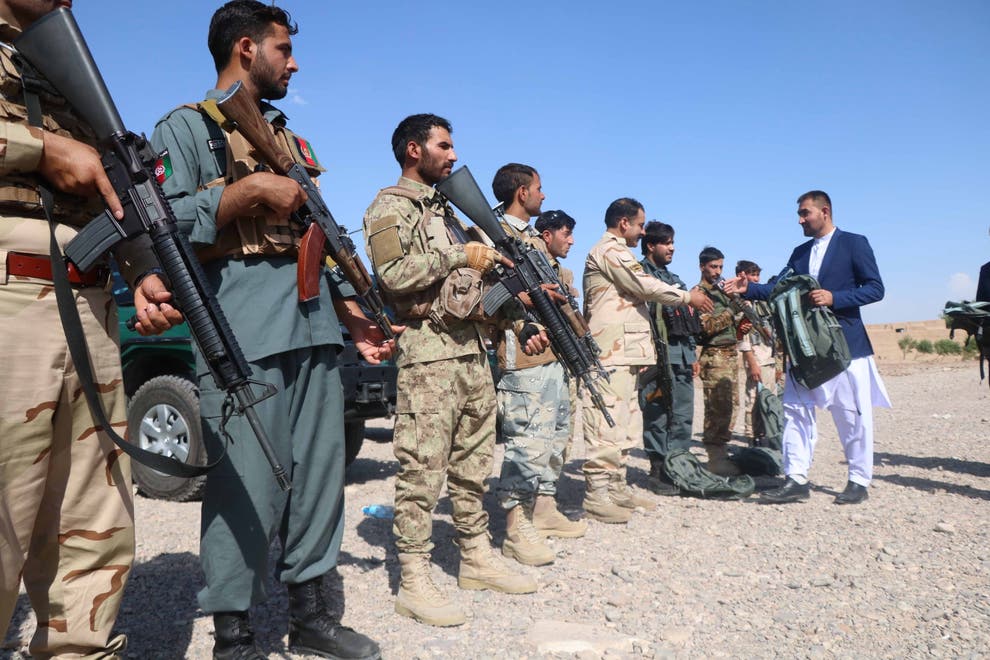 Afghan security officials stand guard against the Taliban during a ceremony in Herat, near Badghis Province. / EPA

Turkmen President Gurbanguly Berdimuhamedov has discussed the possibility of strengthening military presence on the border with Afghanistan in a meeting held by the country’s Security Council.

There was also part of the meeting, reportedly held behind closed doors and not covered by the media, during which Berdimuhamedov and the heads of the military agencies discussed the unstable situation in neighboring Afghanistan and also looked at the possibility of increasing the military presence of Turkmen troops on the border of the two countries, the Chronicles of Turkmenistan reported on July 6.

The deployment of an air group support unit and rocket launchers in the Mary and Lebap regions at a distance of 130 km from the border were discussed as possible measures. Assault units and military helicopters will be transferred to military airfield Mary-2, the report added.

It was also proposed that military units on the border with Iran in Garrygala, Serdar (formerly known as Gyzylarat), Baharden and Kaahka areas be reinforced with special forces.

“The issues of involving foreign mercenary troops in border protection was also discussed. The Turkmen command has information that Uzbekistan and Tajikistan, on whose borders hostilities are taking place, have already allocated funds to attract mercenaries from foreign countries,” the report added.

The Taliban group has recently significantly broadened the territory under its control amid the withdrawal of US-led troops from Afghanistan that started on May 1. Military violence has escalated and the Taliban are expanding into areas under their control, as Western troops continue to withdraw from Afghanistan.

For the time being, the Taliban has shown no interest in attacking neighboring countries, however, the group is trying to seize border areas and take control of checkpoints and, accordingly, logistics routes. The Taliban took control of Andkhoy Province, which borders Turkmenistan and where the Aqina border crossing is located. Currently, the Afghan government forces are stationed 10 kilometers from the Aqina border crossing. Meanwhile, Taliban militants have blocked the road to the crossing.

An inauguration attended by the Afghan and Turkmen presidents was held to mark the opening of a 24 km 1520mm-gauge line between the town of Aqina, located on the Afghan border with Turkmenistan, and the northern Afghan town of Andkhoy on January 14. Funding, surveying, design and construction of the extension were carried out by Turkmenistan due to Afghanistan’s lack of domestic rail capabilities.

Construction began in July 2019, when expanded rail facilities at Aqina were inaugurated. The extension, which was opened alongside new cross-border electricity and fiber optic connections, is intended to solidify relations between the two countries and improve regional connectivity.

The Taliban has intensified attacks across the country over the past two months, capturing multiple districts on a daily basis. Now, more than 100 Afghan districts have been seized by the Taliban. Many of the cities captured by the Taliban are in the north of the country, in provinces bordering Afghanistan's Central Asian neighbors. In late June, the Taliban captured several districts of Balkh province near Mazar-e Sharif and the border with Uzbekistan.

On July 7, a Taliban delegation led by Mohammad Abbas Stanikzai met a delegation of Afghan politicians, as well as Iranian officials in Tehran to discuss the Afghan peace process.

“We are very proud that we remained alongside our Afghan brothers and sisters during the jihad of the Afghan people against the foreign invasion,” Iranian Foreign Minister Mohammad Javad Zarif said during the meeting.