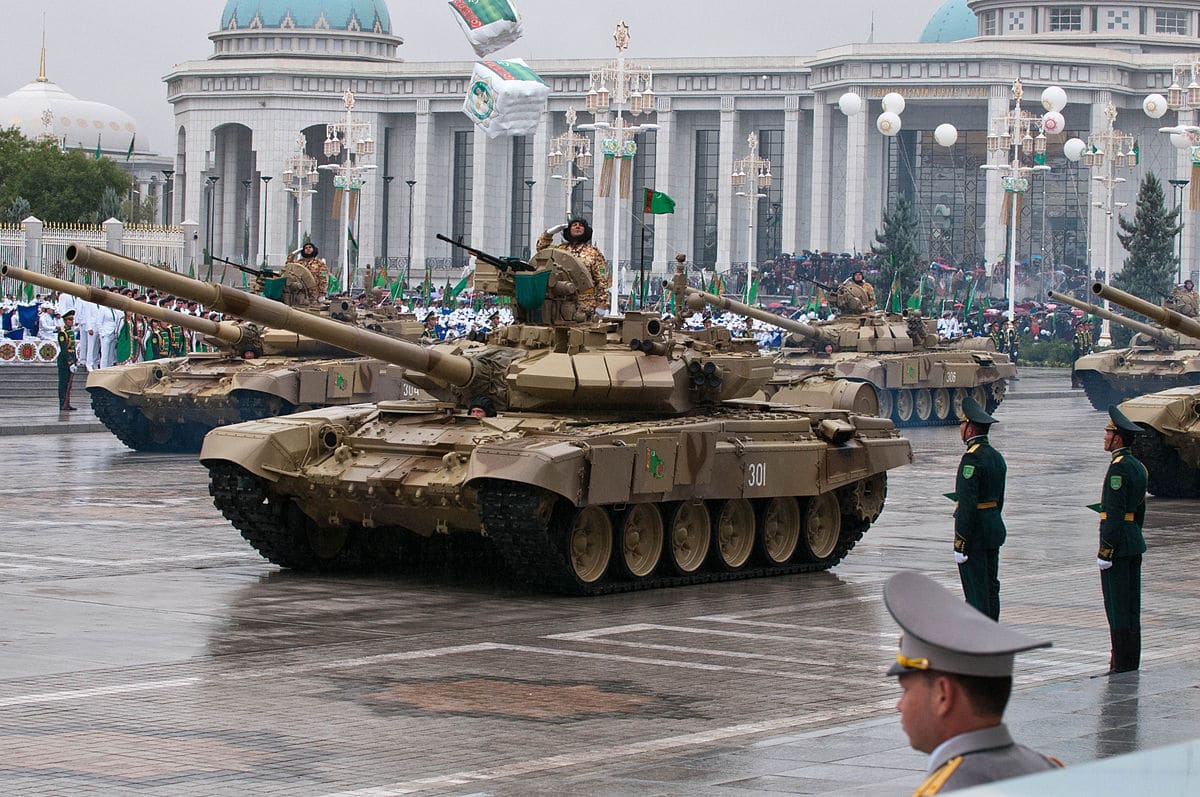 The military parade celebrating the 20th year of independence in Turkmenistan, on October 27, 2011. / Wikimedia Commons

Turkmenistan has started moving heavy weaponry and aircraft closer to its border with Afghanistan as security deteriorated in the neighboring country due to the seizure of border areas by the Taliban militant group.

“More troops from an army garrison near the city of Mary are being sent to bolster border guard units. Mary is about 400 kilometers north of Sarhadabad, a major border crossing with Afghanistan,” a senior official at a Turkmen security agency told Radio Free Europe/Radio Liberty on July 11, speaking on the condition of anonymity.

The official added that additional forces sent to the border include officers, fighter jets, and helicopters. However, the source has not revealed the exact number of military equipment to be massed at the border with Afghanistan.

Meanwhile, the Afghan government and the Taliban have assured that no neighboring countries in the region are subject to any harm from the ongoing situation in the country.

“Afghan security and defense forces assure all Afghanistan neighbors that they are fully prepared to repel any threat to them anywhere, but the role of countries in the region and its neighbors are very important in the fight against terrorism,” Afghanistan Times quoted Dawa khan Menapal, Director of Government media and information center (GMIC), as saying.

In talks with the Russian Foreign Ministry last week, the Taliban said it would not attack countries in Central Asia despite its rapid advance through Afghanistan.

“We received assurances from the Taliban that they would not violate the borders of Central Asian countries,” Russia’s foreign ministry said last week.

Russia is expected to send 7,000 servicemen and 100 tanks as military aid to strengthen the Tajik-Afghan border. Foreign Minister Sergei Lavrov has said the country would also use the capacity of the Russian 201st military base in Tajikistan. Tajikistan and Uzbekistan have already mobilized their military units along their borders, while regional Russian joint military bases are also on alert. On July 5, Tajikistan President Emomali Rahmon ordered strengthening the security at its border, announcing last week that an additional 20,000 troops would be deployed along his country’s border in response to Taliban attacks. The Taliban now reportedly controls two-thirds of the 1,357 km-long Tajik-Afghan border.

Turkmenistan’s deployment of military equipment to the border with Afghanistan comes amid an official visit of a delegation led by Taliban’s spokesperson Sher Mohammad Abbas Stanikzai to Turkmenistan. Stanikzai has already met with the Turkmen Deputy Foreign Minister to discuss political, economic, and security issues.

Turkmenistan shares an 800-kilometer-long border with Afghanistan, where the security situation has deteriorated sharply as Taliban fighters advanced on provincial centers and even some border crossings. The Taliban took control of Andkhoy Province, which borders Turkmenistan and where the Aqina border crossing is located. The Islam Qala border town, one of the main trade gateways into Iran, and the Torghundi border town, one of the two trade gateways into Turkmenistan, have also fallen to the militant group.

The Taliban has significantly broadened the territory they hold amid the withdrawal of US-led troops from Afghanistan that started on May 1. US President Joe Biden said on July 8 that the military mission in the country would conclude on August 31. However, the US will still have about 650 troops in Afghanistan to protect its embassy in Kabul.

The Taliban have intensified attacks across Afghanistan over the past two months amid US troops’ withdrawal. This week, the militants claimed that they were in control of 85 percent of the country’s territory, but officials in Kabul denied these claims.

Now, more than 200 Afghan districts have been seized by the Taliban. Some of the cities captured by the Taliban are located in the northern provinces of the country bordering Central Asian countries.