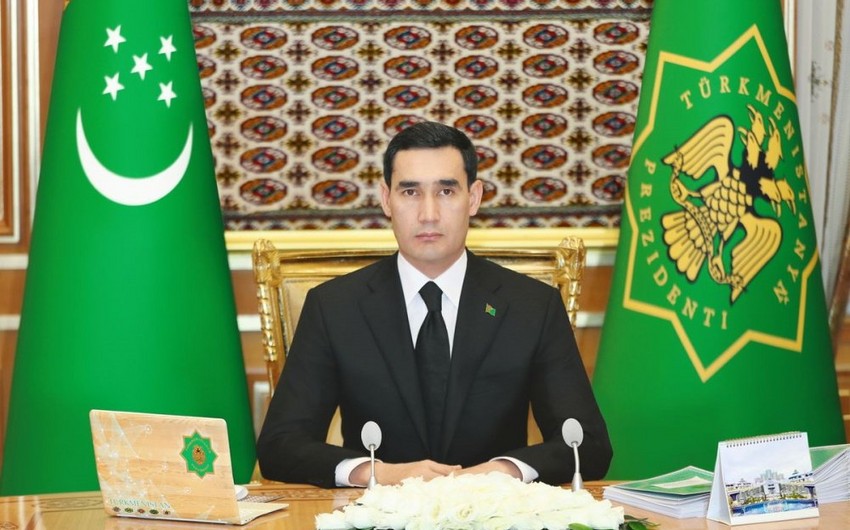 Turkmen President Serdar Berdimuhamedow received Russian Deputy Prime Minister, Co-Chairman of the Intergovernmental Turkmen-Russian Commission on Economic Cooperation Alexei Overchuk, who arrived in Ashgabat on a working visit at the head of the government delegation of his country on April 9, 2022. / Turkmenistan Today

Turkmenistan's President Serdar Berdimuhamedow and Russian Deputy Prime Minister Alexei Overchuk have discussed the expansion of ties in the spheres of trade and energy.

In a meeting with a Russian delegation in the Turkmen capital, Berdimuhamedow expressed satisfaction over the achieved level of interstate relations built on the solid foundations of the strategic partnership, the Turkmenistan Today news agency reported on April 9.

The recently-elected Turkmen president and the Russian deputy premier, who is a co-chairman of the Turkmen-Russian commission on economic cooperation, "noted great potential for intensifying cooperation in key areas, including trade, economy, the fuel and energy sector, agriculture, the light and processing industry, transport, communications and a number of other priority areas".

They discussed possible partnerships in the development of the Caspian Sea, in particular, cooperation in the field of shipbuilding.

In a meeting on April 10, Overchuk and Turkmen Foreign Minister Rashid Meredow discussed key areas of bilateral cooperation and issues related to the implementation of agreements reached during the negotiations at the highest level.

The Russian deputy prime minister confirmed that Russia was "committed to developing a mutually beneficial dialogue with Turkmenistan in all areas". In turn, Meredow noted that Turkmenistan "attaches great importance to developing bilateral relations".

Earlier, on April 8, in a phone conversation with the Turkmen president, Russian counterpart Vladimir Putin invited Berdimuhamedow to visit his country and the invitation was accepted with “gratitude”, according to the official website of the Russian president.

The two leaders discussed topical issues on the bilateral agenda and prospects for cooperation in regional formats, including within the Caspian Five. They reaffirmed their mutual resolve to further promote the strategic partnership between Russia and Turkmenistan.

Following economic sanctions imposed on Moscow for its military invasion of Ukraine, Turkmen authorities are stepping up efforts to increase the production of fruits and vegetables exported to Russia.

In early March, Russia lifted restrictions imposed on the import of tomatoes from Turkmenistan. The restrictions were imposed in March 2020 after the products failed to meet the phytosanitary requirements of Russia.