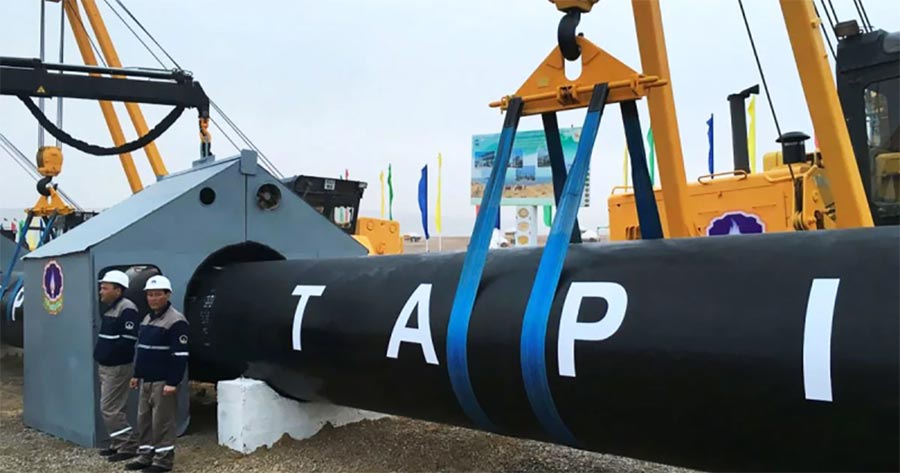 The construction of the $10 billion Turkmenistan-Afghanistan-Pakistan-India (TAPI) gas pipeline began in Turkmenistan in 2015, while the Afghan side launched its part in 2018.

Turkmenistan is delivering on its commitments to help restore sustainable economic growth in neighboring Afghanistan with a new humanitarian package that includes a series of projects masterminded by the Caspian country.

Earlier this week, Turkmenistan’s President Gurbanguly Berdimuhamedow approved a three-year state program to provide Afghanistan with humanitarian assistance. According to the document, Ashgabat will help post-war Afghanistan build new public facilities across the country, as well as provide financial assistance in the realms of health and education.

‘‘Turkmenistan takes a stand for the resolution of the situation in Afghanistan only by peaceful political and diplomatic means, through proposing concrete steps aimed at restoring its economy and social infrastructure,’’ President Berdimuhamedow said Thursday, according to a report by the state-run Turkmenistan Today.

‘‘A crucial component here is the implementation of large infrastructure projects with Afghan participation in such important areas as energy and the transport and communications sector,’’ the head of the country added.

Afghanistan is extremely poor, landlocked, and highly dependent on foreign aid, while much of the population suffers from shortages of housing, clean water, electricity, medical care, and jobs.

Since 2014, the economy has slowed, in large part because of the withdrawal of nearly 100,000 foreign troops that had artificially inflated the country’s economic growth. The Afghan government has repeatedly warned that the country will collapse without continued foreign assistance, while the World Bank claimed that an abrupt cutoff in aid could lead to a collapse of political authority, promote the illicit drug market, and incite armed conflict.

Officials in Turkmenistan have had an interest in helping rebuild war-torn Afghanistan after decades of conflict primarily in the form of infrastructure and energy projects.

Earlier this month, a delegation from Turkmenistan led by the country’s foreign minister, Rashid Meredov met with Ashraf Ghani, the president of Afghanistan, to discuss the Turkmenistan-Afghanistan-Pakistan-India (TAPI) gas pipeline — an ambitious project initiated by Ashgabat.

Following the agreement between Afghanistan, India and Pakistan, gas will be purchased from Turkmenistan and then transported to western and southern territories of Afghanistan, as well as central Pakistan and northwestern parts of India. In Afghanistan, the pipeline will be laid alongside the Kandahar-Herat Highway on the western edge of the country, and then enter Pakistan via the cities of Quetta and Multan. The pipeline’s final destination is the Indian town of Fazilka, about 420 kilometers from India’s capital New Delhi.

The construction of the $10 billion gas pipeline began in Turkmenistan in 2015, while the Afghan side launched its part in 2018.

The pipeline is expected to supply about 33 billion cubic meters (bcm) of gas per year from Turkmenistan’s giant Galkynysh gas field. Five bcm out of the entire volume will be absorbed by Afghanistan, while Pakistan and India will receive 14 bcm each. The pipeline has been designed for a 30-year period and is expected to begin operations in 2020.

According to President Ghani’s Office, the project will create thousands of job opportunities for Afghans, while the country will earn more than $400 million in transit duties annually from the project.

Meanwhile, the Central Asian country’s contribution to the economic rebirth of Afghanistan is not about only energy relief.

In 2018, an international transit route linking Afghanistan to Turkey via Turkmenistan, Azerbaijan and Georgia was opened to help Afghanistan to ship its goods to the Black Sea, the Mediterranean, and the European market in the shortest possible time.

“The Lapis Lazuli route has its own advantages and benefits. The Karachi route was a better and more secure way in the past, but unfortunately, the problems have emerged for Afghan investors who suffered hundreds of millions of dollars loss,” said Abdul Qadir Bahman, CEO of the chamber, according to a report by Tolo News.