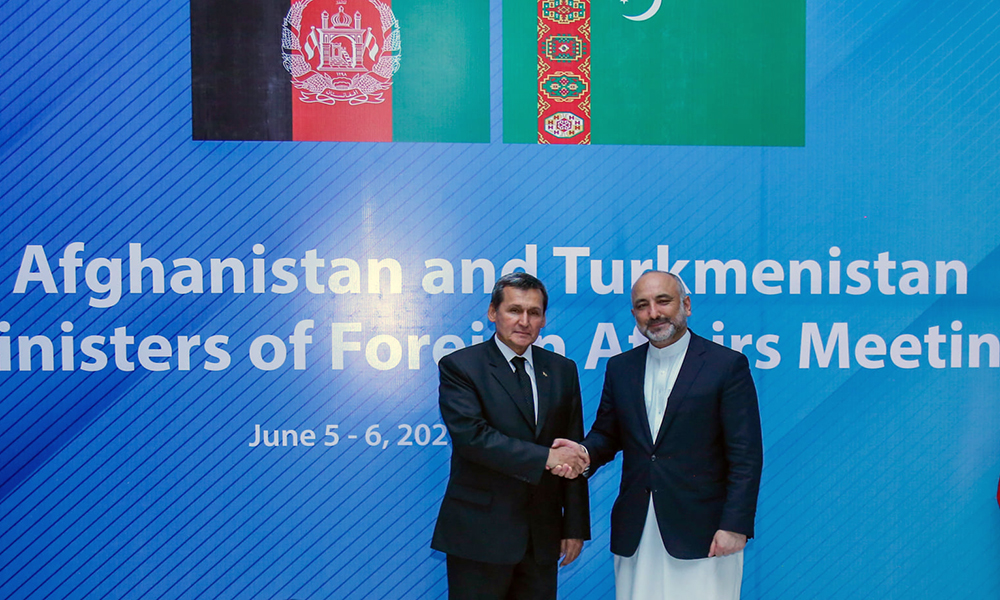 Afghanistan’s Foreign Minister Mohammad Haneef Atmar and his Turkmen counterpart Rashid Meredow met in the western Afghan province of Herat on June 5 to discuss various projects. The meeting focused on such initiatives as the TAPI, a pipeline that would transport Turkmenistan’s natural gas to Pakistan and India through Afghanistan, and the Lapis Lazuli transit route connecting Afghanistan to Turkey and Europe via Turkmenistan, Azerbaijan, and Georgia.

“The Afghan delegation shared details on the country’s estimated $200-billion-worth of various resources and rare stone, which it said would be significant in strengthening and expanding trade with Ashgabat, considering the demand in regional countries, particularly Turkmenistan, for marble,” according to the Afghan ministry’s statement.

Rashid Meredow said during the meeting that Turkmenistan was firmly committed to support the Afghan peace process and expand bilateral economic relations.

A memorandum of understanding (MoU) on cooperation agreements and contracts for major transport and investment projects was signed between Afghan and Turkmen officials. The ministers also discussed the importance of implementing the Torghundi-Herat railway project.

Earlier this year, Afghan President Mohammad Ashraf Ghani told his Turkmen counterpart Gurbanguly Berdimuhamedow that regional connectivity clusters and large-scale projects “will transform the living conditions of the Afghan people for the better and improve the situation in the entire region.”

The statement was made in mid-January when officials from Ashgabat and Kabul launched a series of infrastructure projects to link landlocked Afghanistan to distant markets.

The two countries have launched a 30 km railway segment that links the Afghan border cities of Aqina and Andkhoy. It is supposed to become a part of the 400-km trade and transportation corridor connecting Tajikistan, Afghanistan, and Turkmenistan. In addition, the railway line may be extended to the border with Kyrgyzstan, with further access to the states of the Asia-Pacific region.

The other projects launched in January included a power line and an optic cable line.

Last year, officials from Turkmenistan and Afghanistan signed a memorandum of understanding to speed up constructing a project known as TAPI. The nearly 2,000-kilometer pipeline is expected to supply about 33 billion cubic meters (bcm) of gas per year from Turkmenistan’s giant Galkynysh gas field. Five bcm out of the entire volume will be absorbed by Afghanistan, while Pakistan and India will receive 14 bcm each. Officials in Ashgabat and Kabul say the TAPI will be inaugurated in August 2021.