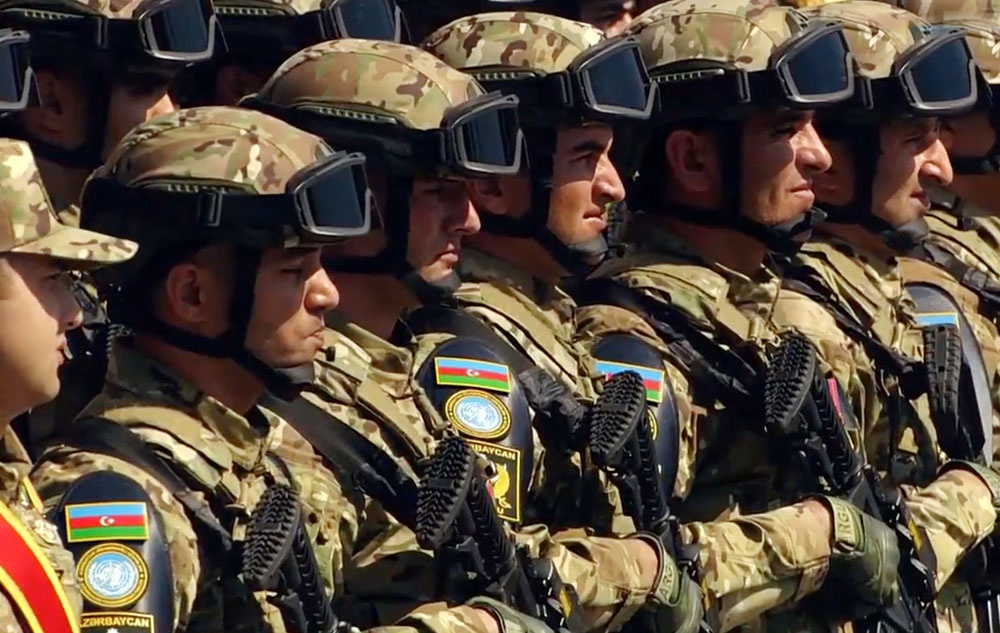 According to 2020 data compiled by the Global Firepower, a leading tracker of global military data, the total military personnel of Azerbaijan stands at 426,000, including 126,000 active and 300,000 reserve forces / Ministry of Defense of Azerbaijan

Authorities in Azerbaijan and Turkey have denied fake news claiming that mercenaries from Syria are being deployed to support Azerbaijani forces in the fight against the Armenian troops.

A pro-Kurdish news agency Firat reported on July 19 that Syrian mercenaries were being deployed in various regional countries, including in Libya, Yemen and Azerbaijan. An unnamed official from the Turkish government told Russia's state-run TASS news agency that such information is not true.

One of the main opposition fronts in war-torn Syria is the Syrian National Army (SNA), which fights to dethrone the country's president Bashar Al-Assad. The insurgent group that was established in 2011 as the Free Syrian Army by the anti-government Syrian army officers and was rebranded to its modern-day name in 2013 is backed by Turkey. The SNA has reportedly mobilized 3,000 fighters to support Turkey's Operation Peace Spring against terrorists in northern Syria.

The reports about the transfer of Syrian mercenaries to the battlefields in Azerbaijan have been denied by the Azerbaijani authorities, as well. An official from the government of Azerbaijan told TASS agency that the news published by Firat last week is "fictional and fake" as the Armed Forces of Azerbaijan have enough personnel to defend the country against Armenia's attacks.

Fake news on the deployment of the Syrian mercenaries came amidst the recent border clashes between the troops of Armenia and Azerbaijan. The fighting broke out on July 12 when Armenia opened heavy artillery fire on the positions of the Azerbaijani army stationed in the western Tovuz district on the border with Armenia. The short, but fatal skirmishes claimed lives on both sides over a few days, including 12 servicemen and one civilian in Azerbaijan.

Official data compiled by the government of Armenia confirms four deaths in the national army, however, local social media users have claimed that the figure is more than 30, blaming the government for misinforming the public.

Meanwhile, the State Service for Mobilization and Conscription of Azerbaijan revealed this week that over 50,000 people have applied for voluntary military service as of July 21. Last week, tens of thousands of men and women flocked to the streets of capital Baku to demonstrate solidarity with the national army. According to a 2017 global survey conducted by Gallup International, 85 percent of Azerbaijanis are ready to fight for their country.

According to 2020 data compiled by the Global Firepower, a leading tracker of global military data, the total military personnel of Azerbaijan stands at 426,000, including 126,000 active and 300,000 reserve forces. The overall ranking of the country is 64 among 138 countries, meaning the strongest military in South Caucasus ahead of Georgia (89) and Armenia (111).

Following the dissolution of the Soviet Union in 1991, Armenia launched an all-out military campaign against Azerbaijan. A war that stopped in a ceasefire in 1994, saw Armenia occupying Azerbaijan's Nagorno-Karabakh region and seven surrounding districts. One million ethnic Azerbaijanis were forcibly displaced from the occupied lands, while 30,000 fell victims to the Armenian army's atrocities.

Despite four UN resolutions demanding immediate withdrawal of occupying forces from Azerbaijani lands and international mediation mandated by the OSCE, Armenia refuses to withdraw its forces, while it has established an illegal separatist regime in Azerbaijan's Nagorno-Karabakh region.