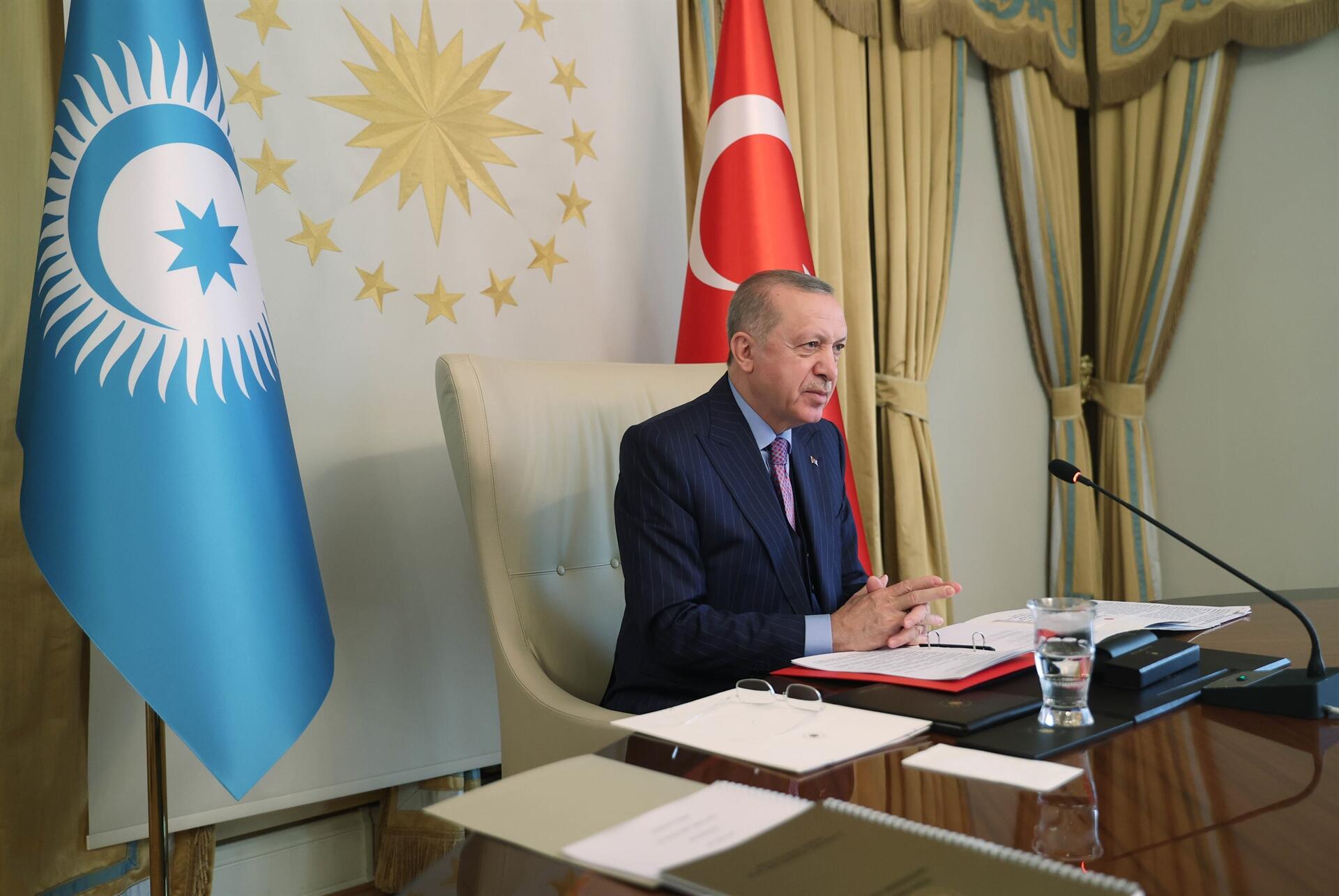 Turkey's President Recep Tayyip Erdogan joined the summit of the presidents of the Turkic Council countries from the Vahdettin Mansion in the capital Ankara, March 31, 2021 / Presidency of the Republic of Turkey

Turkey’s President Recep Tayyip Erdogan revealed his plans to pay a visit to the liberated Shusha city of Azerbaijan in the latter’s Karabakh region. His remarks came as part of his speech at the informal summit of the presidents of the Turkic Council countries on Wednesday.

“We hope that we will visit Shusha as soon as possible after the Eid al-Fitr, and hopefully have a new holiday with our brothers in Shusha,” the Turkish president said at the summit held in a video conference format, TRT Haber reports.

This year, Eid al-Fitr religious holiday of Muslims marks the end of month-long fasting of Ramadan on May 12, according to the Islamic calendar.

President Erdogan said Turkey will continue to stand by Azerbaijan with its entire means for the protection and revival of Turkic heritage in the Karabakh region, which could be guaranteed by the return of all Azerbaijani IDPs to the places of permanent residence in the liberated Azerbaijani region.

Armenia occupied Shusha on May 8 in 1992 during the first war in the Karabakh region of Azerbaijan in 1991-1994. Around 25,000 ethnic Azerbaijanis living in the city and 31 surrounding villages were targeted by the mass ethnic cleansing policy pursued by Armenia. The occupation of Azerbaijan's Karabakh region by Armenia came after both countries gained independence in 1991. Following the Soviet Union’s dissolution, Armenia launched a military campaign against Azerbaijan that lasted until a ceasefire deal was reached in 1994. As a result, Armenia occupied 20 percent of Azerbaijan’s internationally recognized territories. Over 30,000 ethnic Azerbaijanis were killed and one million were expelled from those lands in a brutal ethnic cleansing policy conducted by Armenia.

The Azerbaijani army restored Azerbaijan’s sovereignty over the city of Shusha on November 8 during the 44-day-long counter-offensive operations from September 27 through November 9, 2020. Azerbaijani forces liberated more than 300 settlements, including the cities of Jabrayil, Fuzuli, Zangilan, Gubadli, and Shusha, from nearly 30-year-long illegal Armenian occupation. The liberation of Shusha played a crucial role in the retreat of Armenia’s forces and cessation of hostilities in a ceasefire on November 10. Armenia also returned the occupied Aghdam, Kalbajar, and Lachin districts to Azerbaijan as part of its obligations it took under the ceasefire agreement.

Shusha was founded during the reign of the Azerbaijani Karabakh khanate's Panahali khan in the 18th century. According to the historical sources, Panahali khan decided to build an "eternal and invincible fortress in a firm and impassable place in the mountains" given the unfavorable location of the previous castles. Construction of the city kicked off in 1752 at about 1,600 meters above the sea level in Karabakh and the capital of the khanate was moved to the city in 1756-1757. Shusha has long been one of the main administrative, economic and cultural centers of Azerbaijan since its establishment by indigenous Azerbaijanis.

For Azerbaijanis, Shusha is the temple of Azerbaijani culture and music. Shusha is considered the conservatory of the South Caucasus. The founding father of the Azerbaijani composed classical music and opera, Uzeyir Hajibeyli was born in Shusha, which was also home to world-famous Azerbaijani poet Molla Panah Vagif, poetess Khurshudbanu Natavan, and singer Bulbul.

Azerbaijan’s President Ilham Aliyev said in his speech at the presidential meeting that Turkey expressed its firm support to Azerbaijan since the very start of the war in the Karabakh region.

“This political and moral support was crucial. My dear brother stated that Azerbaijan was not alone and that Turkey was with Azerbaijan. Of course, it was a solemn message, an important signal. That allowed us the opportunity to conduct a successful counter-offensive and prevented outside forces from interfering,” President Aliyev said.

President Aliyev went on to add that the conflict in the Karabakh region is history and it is now time for leveraging new opportunities in the region, including the restoration and reinvigoration of the transport communications. The Azerbaijani president said post-war circumstances allow for Azerbaijan to restore direct transport links with Turkey, while simultaneously giving Armenia chances to establish railway communications with Russia and Iran through the territory of Azerbaijan.