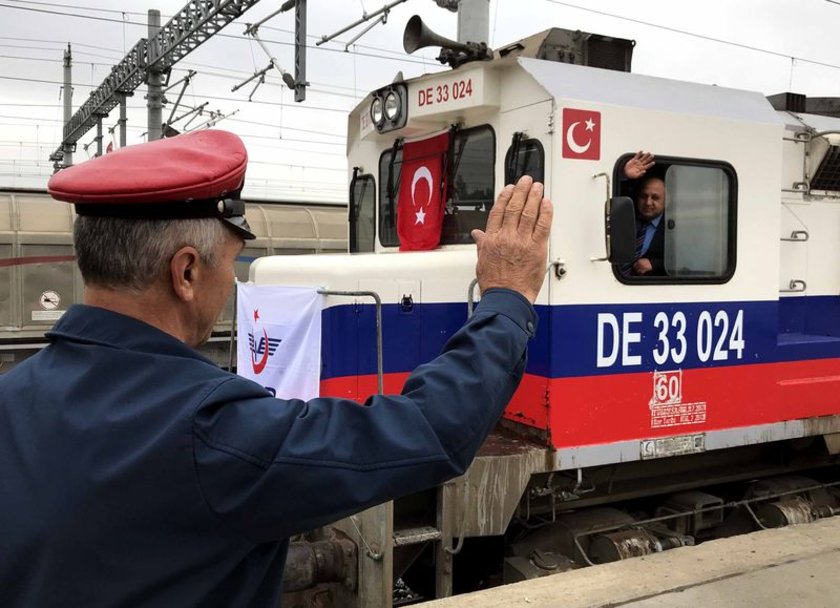 The first fully loaded freight train traveling along the recently opened Baku-Tbilisi-Kars (BTK) railway left the terminal in Mersin, Turkey on Tuesday, and is headed to the Caspian region’s Azerbaijan, Turkmenistan and Kazakhstan.

"Today, we send our first exports to Azerbaijan and Turkmenistan [via the BTK],” Veysi Kurt, Managing Director of Turkish State Railways Transportation Inc., said before the train departed for Azerbaijan’s capital Baku, according to Yenisafak.com.

Loaded with agricultural and construction products, the train is expected to arrive at the western shore of the Caspian Sea within 75-80 hours, or sometime on December 1, having left the Yenije Logistics Terminal in Mersin, on the Mediterranean coast, on November 28.

“We hope to reach Turkmenistan in 100 hours and … Kazakhstan's capital city Astana in 180 hours,” Kurt said of the rail line that currently provides back-and-forth cargo deliveries between Asian and European markets, and will eventually carry passengers.

The 846-km (536 mi) long BTK railway also runs through the Georgian capital city of Tbilisi, as it connects Turkey, Georgia and Azerbaijan.

The train that departed Turkey on Tuesday will ultimately travel 2,100 km (1,305 mi), carrying containers filled with soybean paste and ceramic adhesive. The cargo will be loaded from Turkish containers to freight wagons belonging to Azerbaijan Railways at Achalkalaki station in Georgia, a stopping point along the BTK railway.

Because of the railway, the travel time to move goods from China to Europe via land is cut almost by half, to 15 days and down from the current 25-30 required. During its first three years of operation, the line will carry three to five million tons of cargo; by the fourth or fifth year, experts expect it to reach between six and eight million tons. Eventually, the three countries involved hope to see 17 million tons of cargo move along the BTK railway.

Hopes are high for the line, for different reasons. Turkish officials expect the line to help boost the country’s economy and trade transit potential and turn Turkey into a central hub for Eurasian commerce.

For its part, the Caspian and Central Asian country Kazakhstan is hoping to gain better access to markets beyond its borders.

“It is planned to alleviate the cargo congestion in Central Asia with such freight deliveries between Turkey and Central Asia,” said Onur Göçmez, General Manager at the Arkas Logistics Company and arranged the trip for the first export train from Turkey to Azerbaijan and Turkmenistan.

“We will reach a considerable volume of transporting grain and oil products on way to Turkey and delivering food and construction products on the back route.”