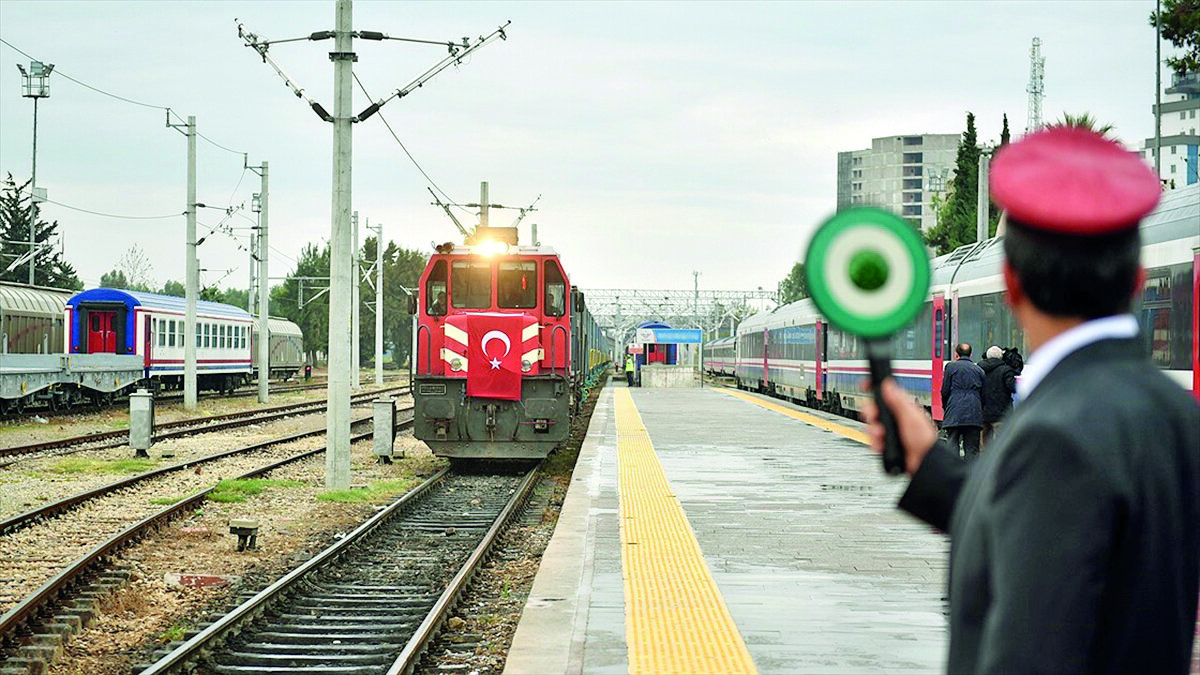 The 826 kilometer-long BTK line, which went online on October 30, 2017, links Azerbaijan’s railway network to the railroad grid of Turkey and enables an easier and faster rail connection between China, Central Asia, and Europe / Courtesy

The first China-bound export train to travel on the Baku-Tbilisi-Kars (BTK) railway departed Kazlicheshme station in Istanbul on Friday.

The train is said to be carrying 1,400 refrigerators in 42 containers and travel a total of 8,693 kilometers (5,402 miles). It will start the journey on the 76.6 kilometer-long Marmaray commuter train line that connects Istanbul's European side with the Asian side and later head towards northwestern Kocaeli province, the capital Ankara, central Sivas province, and eastern Kars province to join the BTK railway line, before making a stop at Akhalkalaki station in Georgia and reaching the Georgian capital Tbilisi.

The train will traverse the entire territory of Azerbaijan from west to east, the Trans-Caspian International Transport Route (TITR), and Kazakhstan before arriving at the final destination in China’s Xi'an province. The freight train co-operated by the Turkish State Railways and its official forwarder company, Pacific Eurasia, will travel through 2 continents, 2 seas, and 5 countries, and deliver the cargo to China in 12 days, which is almost four times faster than the traditional travel time of 45 days.

Mehmet Sait Baykara, Emerging Markets Region Logistics Operations Senior Director at BSH Group, a huge household appliances manufacturer in Turkey, said the exported goods belong to the firm. Baykara added that the trains carrying the cargo to China are the same transit coaches that traveled on the China-Turkey-Europe route in November 2019. Ten block trains have successfully served on the China-Turkey-Europe line to date, according to the Turkish State Railways.

The state railways Director-General, Ali Ihsan Uygun said the active operation of the BTK line has stimulated Turkey to start intensive exports to Asian markets, in particular to China.

"As a result, we have seen that the "Iron Silk Road," which we call the Middle Corridor, needs to be put into operation in order to turn our country's production into exports. We have completed important meetings for this purpose. We plan to carry out these exports together with our private sector companies," Uygun said.

Turkish authorities consider BTK a vital segment of the "Iron Silk Road" stretching from China to Turkey and further into Europe.

The 826 kilometer-long BTK line, which went online on October 30, 2017, links Azerbaijan’s railway network to the railroad grid of Turkey and enables an easier and faster rail connection between China, Central Asia, and Europe. Starting in Baku, trains on BTK rails cut through Georgia’s capital Tbilisi towards the final destination of Kars in northeast Turkey.

BTK's current capacity can carry around one million passengers and 6.5 million tons of cargo per year. By 2023, annual cargo deliveries on the line will reportedly reach 17 million tons. The BTK railroad cuts the overland journey between China and Europe to 15 days instead of 25-45, making it twice as fast as sea transport and less than half the price of air travel.

As of May 2020, the BTK line carried 520,000 tons of freight, including 240,000 tons of export goods in 5,250 containers and 280,000 tons of import goods in 5,300 containers. Turkey has put a container transfer system along the route on the Turkish-Georgian border, which helped increase the daily capacity up to 3,500 tons. Turkey is also building a logistics center with an overall capacity of 412,000 tons in the far eastern province of Kars which will be connected to the BTK on a 7 kilometer-long rail line.

"During the pandemic, it was important that trade did not stop, especially when the Iranian border was closed. Closing the border at a time when the wheels of the economy should be turned, did not cause any inconvenience thanks to the entry of the BTK line into the system," a member of Turkish parliament from Kars, Ahmet Arslan said in June. "Some 138,000 tons of cargo was transported on BTK during this period alone and we will talk about millions [of tons] in the coming periods with the systems developed due to the logistics centers."