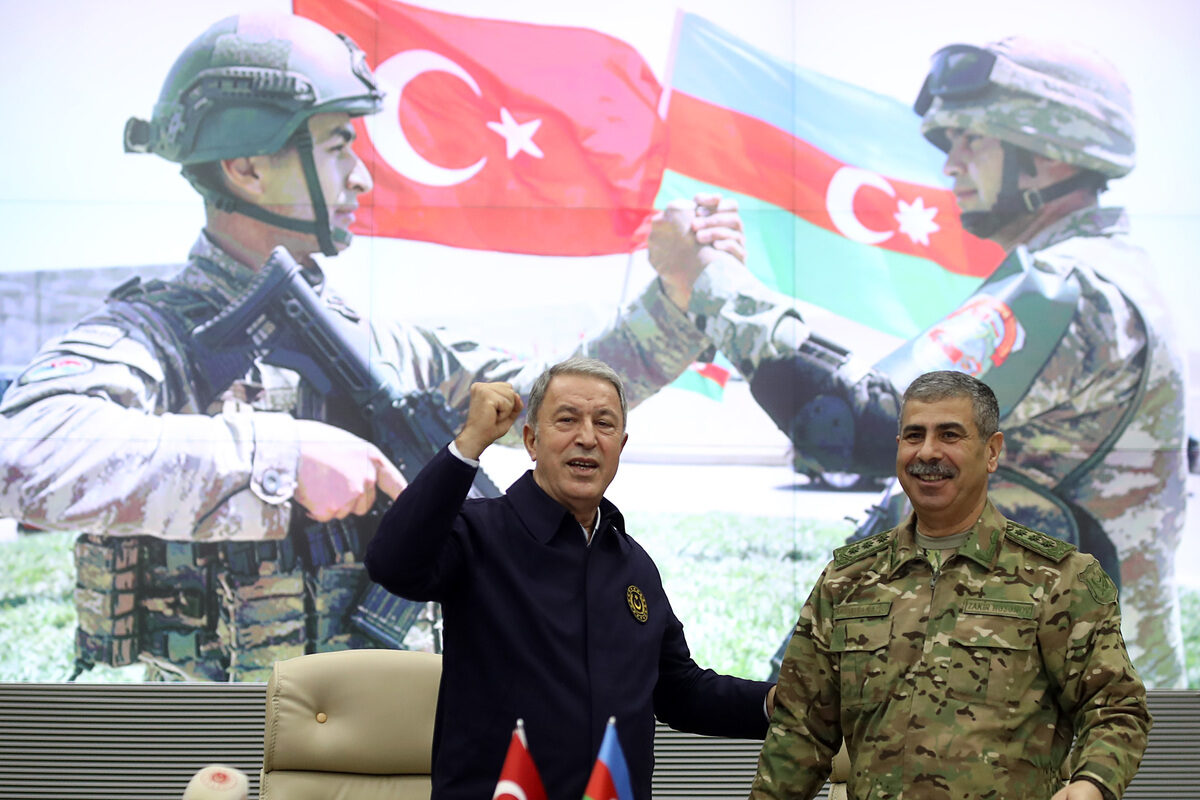 Turkey and Russia have finalized an agreement that paves the way for the establishment of a joint monitoring center in Azerbaijan's Karabakh region.

The National Defense Ministry of Turkey said Tuesday in a statement that the last phase of negotiations covered technical details regarding the establishment and the basic taskforce principles of the Joint Turkish-Russian Center.

Russian Defense Ministry's Representative Major General Igor Konashenkov said personnel in the center will be deployed in equal numbers from both countries.

"In accordance with the memorandum signed on November 11 between the Ministry of Defense of the Russian Federation and the Ministry of National Defense of the Republic of Turkey, an agreement has been reached on the procedure for the deployment and operation of the Joint Russian-Turkish Center for controlling the ceasefire and all military actions," he said, RIA Novosti reports. "The center will be located on the territory of Azerbaijan. Russian and Turkish personnel in the organizational structure of the joint center will be equivalent."

President Ilham Aliyev of Azerbaijan announced the upcoming establishment of the Joint Turkish-Russian Center in a meeting with the Turkish foreign affairs and national defense ministers and national intelligence director in Baku on November 10. The president described the plan as an all-new format of regional cooperation that supports Azerbaijan's aim of having Russia and Turkey play an equal role in the Armenia-Azerbaijan Nagorno-Karabakh conflict.

Turkish President Recep Tayyip Erdogan confirmed his Azerbaijani counterpart's words by announcing on November 11 that Ankara and Moscow signed a memorandum of understanding for the creation of the Joint Turkish-Russian Center. Erdogan said the observation and inspection team from Turkey to be deployed in the center will perform the same tasks as their Russian colleagues.

The center will reportedly monitor the fulfillment of obligations by Armenia and Azerbaijan taken under a tripartite ceasefire statement signed by the two countries and Russia on November 10. The document ended 44-day-long hostilities in the Karabakh region securing major territorial regains for Azerbaijan, while obliging Armenia to return three occupied districts to Azerbaijan by December 1. The Azerbaijani army retook control over the occupied parts of the Aghdam district, as well as the Kalbajar and Lachin districts by the date specified in the document.

Russia assumed the peacekeeping mission in the Nagorno-Karabakh region of Azerbaijan under the trilateral ceasefire deal. Currently, a contingent of 1,960 Russian peacekeepers serves in the observer posts deployed in the region. The peacekeeping force of Russia will remain in the region for at least five years with the possibility of extension as stated in the ceasefire agreement.

The Turkish parliament has already approved the law on sending peacekeeping troops to Azerbaijan on November 17 and President Erdogan signed it on November 18. According to the document, Turkish troops will be stationed at the Joint Russian-Turkish Center for one year. President Erdogan's administration will determine the number of troops to be deployed which has not been specified to date.

Azerbaijan has the final say on the location of the Joint Russian-Turkish Center within the territory of Karabakh, the internationally recognized region of Azerbaijan. Some analysts claim that the center may be deployed in one of the districts liberated by the Azerbaijani army during the latest military operations. Azerbaijani army liberated around 300 settlements, including five cities in its Karabakh region before the military operations ended in a ceasefire on November 10. The conflict in the Karabakh region of Azerbaijan spiraled on September 27 after Armenia's forces deployed in the occupied Azerbaijani lands started shelling the military positions and civilian settlements of Azerbaijan.

The Nagorno-Karabakh (Daghlig Garabagh; "daghlig" in Azerbaijani is translated as "mountainous" in English and "nagorno" in Russian) region and seven surrounding districts, altogether comprising roughly 20 percent of Azerbaijan’s internationally recognized territory, were occupied by Armenia in a 1991-1994 war that ensued after the dissolution of the USSR. Over 30,000 ethnic Azerbaijanis were killed and one million were expelled from those lands in a brutal ethnic cleansing policy conducted by Armenia. Although the United Nations Security Council adopted four resolutions in 1993 demanding the immediate withdrawal of the occupying forces from the Azerbaijani lands and the return of internally displaced Azerbaijanis to their ancestral lands, Armenia failed to comply with all four legally binding documents.

After the clashes over 44 days in the Karabakh region, Azerbaijan's government is currently working on a plan to return the displaced Azerbaijanis back to their permanent residence in once occupied areas that are now liberated.