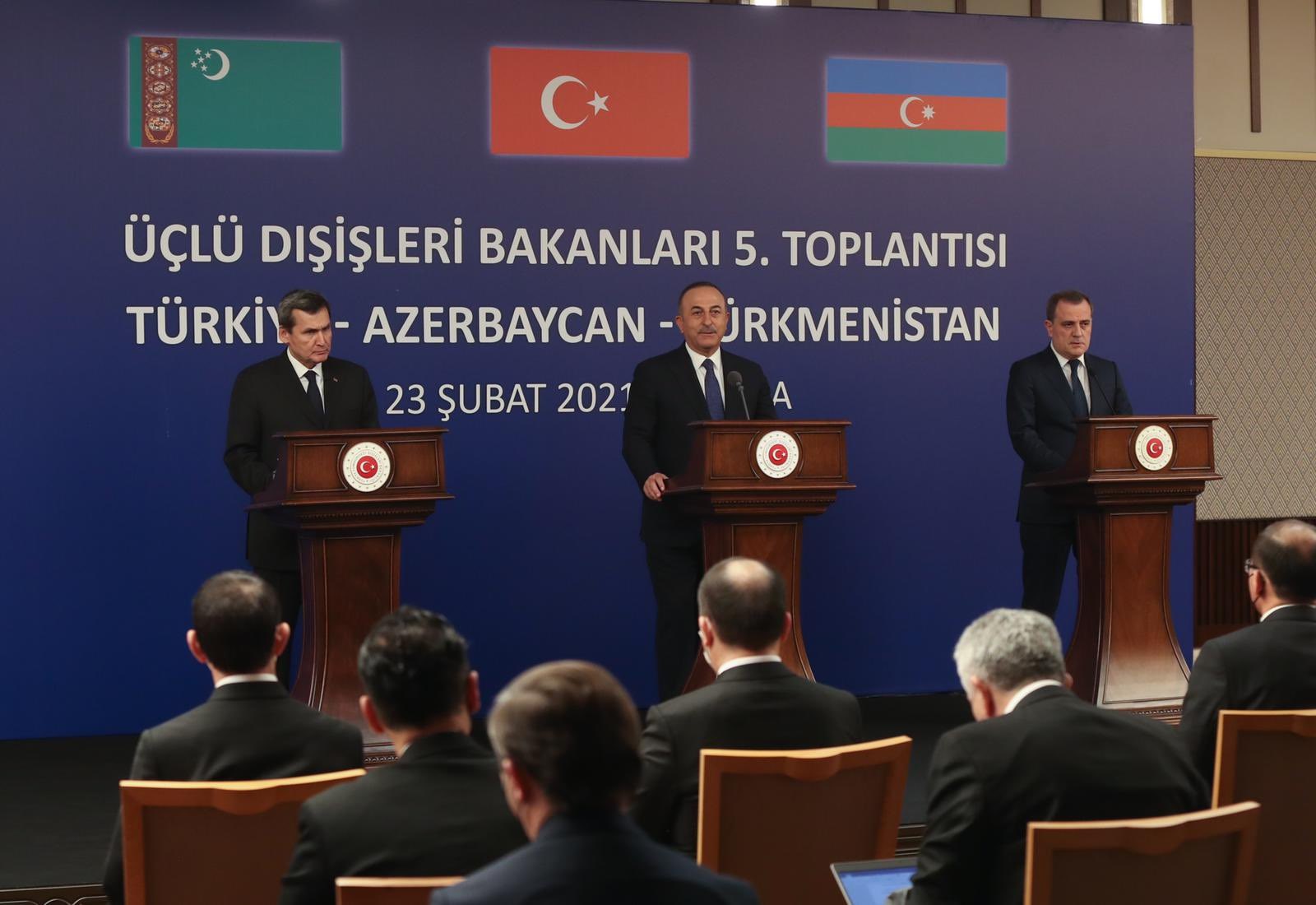 The fifth trilateral meeting of the foreign ministers of Turkey, Azerbaijan and Turkmenistan was held in the Turkish capital, Ankara, on February 23, 2021. / Turkmen Portal

The Turkish foreign minister has expressed his country’s readiness to deliver Turkmen gas to Turkey and Europe.

“We are ready to do everything that depends on us in order to deliver gas from Turkmenistan to Turkey and further to Europe,” Turkish Foreign Minister Mevlut Cavusoglu told his Turkmen counterpart Rashid Meredov at a joint press conference within the framework of a trilateral meeting in Ankara, on February 23, according to the Turkmenportal agency.

For his turn, Meredov said that “we can implement joint projects in the field of energy, transport, high technologies and other areas. Turkmenistan, for its part, will prepare a plan and relevant programs and offer them to Turkish friends."

The Turkmen minister added that despite the coronavirus pandemic, the trade turnover between Turkmenistan and Turkey amounted to about $2 billion in 2020.

During the meeting, the two ministers signed a cooperation agreement for 2021 and 2022, and also emphasized the importance of strengthening bilateral relations within the framework of regional and international structures.

The Foreign Ministers of Azerbaijan, Turkey and Turkmenistan signed a joint statement after the meeting in the Turkish capital, agreeing to “support the further development of cooperation through the strengthening of the trade-economic cooperation, using the existing potential for promotion of investment and trade as well as carrying out joint projects and programs in the spheres of customs, energy, transport, telecommunications, industry, agriculture, science, education, culture, tourism, and environment."

It also referred to the transit potential of these countries and the realization of new transit projects, including the “East-West” Trans Caspian Transport Corridor, the Baku-Tbilisi-Kars (BTK) railway project as a part of the Modern Silk Road in facilitating competitive transportation between Asia and Europe, and also welcomed the entry into force of the Lapis Lazuli Transit and Transport Cooperation Agreement. The statement also stressed the importance of the effective operation of maritime transport between the ports of Turkmenbashi in Turkmenistan and Alat in Azerbaijan in this regard.

The sides also welcomed the signing of a memorandum between Azerbaijan and Turkmenistan for joint exploration and development of the Dostlug offshore oil and gas field in the Caspian Sea, expressed their readiness to implement joint projects for the delivery of energy resources to Turkey and the rest of Europe.

During the trilateral meeting, Azerbaijani Foreign Minister Jeyhun Bayramov said that joint exploration and development of hydrocarbons in the Dostlug field would provide a positive contribution to the energy security of Turkey and other European countries.

On February 23, the Azerbaijani parliament ratified a memorandum of understanding on the development of the Dostlug field (“Friendship” in Turkic), which was signed on January 21 during an intergovernmental meeting in Ashgabat by the foreign ministers of the two countries. According to the document, the hydrocarbon resources of the field will be distributed between Turkmenistan at 70% and Azerbaijan at 30%.

The transportation of Dostlug field’s resources bound for the international market will be implemented with the use of Azerbaijan's existing transport transit systems on the basis of competitiveness and in accordance with the norms and practices of the international oil and gas industry.

The field, previously named Kapaz by Azerbaijan and Serdar by Turkmenistan, had been discovered by Azerbaijan in 1959 and an exploration drilling was commenced in 1986. After the collapse of the Soviet Union, the two countries were at odds over the ownership of the undersea field and the area was left undeveloped for years.

In 1997, Turkmenistan announced tenders for the development of the Kapaz field in the Caspian Sea, which the country claims as its own, while the State Oil Company of the Azerbaijan Republic (SOCAR) said in an official statement that the Kapaz field is located in Azerbaijani waters, adding that Turkmenistan has no legal basis for offering such a tender. Under the agreement reached between Baku and Ashgabat in 2008, the sides agreed to suspend any exploration work at the field until all issues involving the field are resolved.

It is estimated that the field located in the middle of areas belonging to Azerbaijan and Turkmenistan hosts reserves of 100 billion cubic meters (over 3.5 trillion cubic feet) of natural gas and 60 million tons of oil.