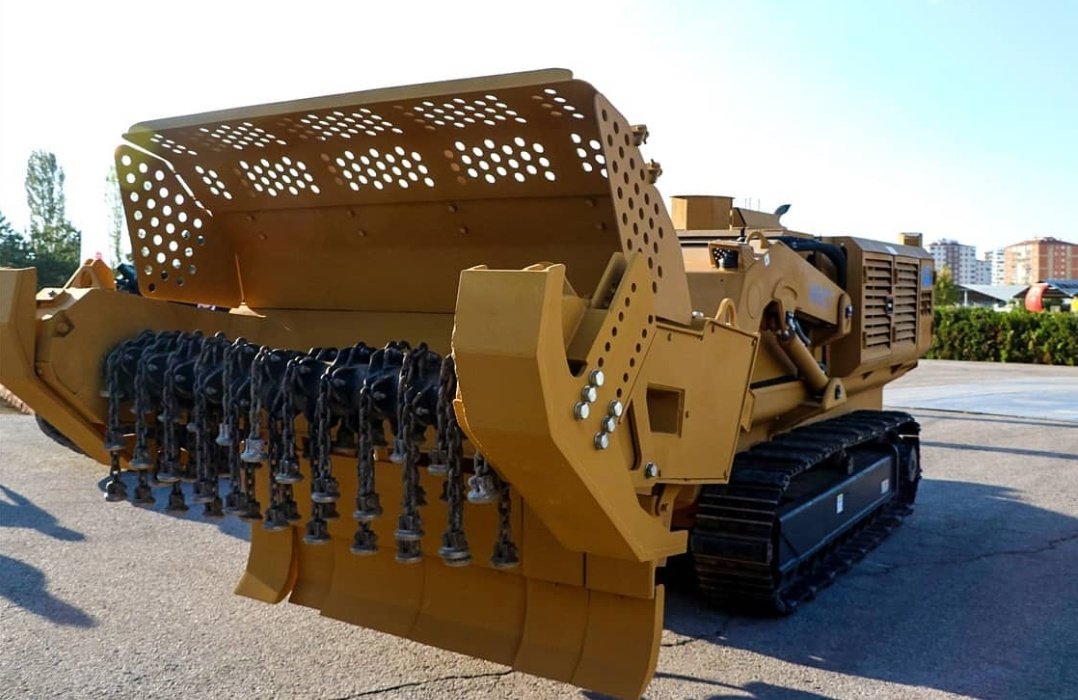 Azerbaijan has upgraded the engineering equipment arsenal of its armed forces with cutting-edge machinery and equipment from Turkey.

Turkey's Ministry of National Defense announced on Thursday that the first batch of machines, dubbed "MEMATT," was delivered to Azerbaijan on board a plane belonging to the Air Forces Command. The Defense Ministry of Azerbaijan posted a video of the machines from the Baku airport confirming the completion of the arrival on the same day.

"The machinery and equipment will be transferred into the armament of Azerbaijan Army’s engineer-sapper units stationed in liberated territories to get involved in the work on clearance of human settlements, including lands suitable for sowing from mines and unexploded ordnance," the Azerbaijani ministry said.

Turkish media reported that the first batch includes 20 units of MEMATT or Mechanical Mine Clearing Equipment. Azerbaijan is the first country to purchase Turkey-made mine-clearing equipment.

MEMATT is a top-notch unmanned mine-clearing equipment co-produced by Turkey's state-run defense contractor ASFAT and the Turkish private defense companies. The machine is covered with Armox 500T, known as the world's toughest protection plate made of ultra-hard armor steel. MEMATT is mine-resistant and controlled remotely from up to 500 meters (1,640 feet).

The maximum speed of the equipment is 4 kilometers (2.48 miles) per hour, it can dive into a depth of 25 centimeters from the surface and clear a 1-kilometer-long, 1.7-meter-wide area from mines within an hour.

Azerbaijan's lands have been mined heavily following their occupation by Armenia in the early 1990s. Armenia kicked off a full-blown military aggression against Azerbaijan following the Soviet Union’s dissolution in 1991. The bloody war until a ceasefire in 1994 saw Armenia occupying 20 percent of Azerbaijan’s internationally recognized territories – the Nagorno-Karabakh (Daghlig Garabagh) region and seven surrounding districts. Over 30,000 Azerbaijanis were killed and one million were expelled from those lands in a brutal ethnic cleansing policy conducted by Armenia.

Azerbaijani forces managed to liberate over 300 occupied settlements, including the cities of Jabrayil, Fuzuli, Zangilan, Gubadli and Shusha in 44-day-long counter-attack operations from September 27 through November 9, 2020. The war ended in a tripartite ceasefire statement signed by Armenia, Azerbaijan and Russia on November 9. Armenia returned the occupied Aghdam, Kalbajar and Lachin districts to Azerbaijan as part of the agreement.

Officials at the Azerbaijan National Agency for Mine Action (ANAMA) say the neutralization of unexploded ammunition, warheads, missiles in the combat zones could take 5-6 years, while it is about 10-13 years for the mined areas. During the most recent search operations from January 30 to February 1, ANAMA specialists have found 199 unexploded ordnance, 3 antipersonnel mines, 1 anti-tank mine, 2,782 cartridges of various calibers, 8 detonators, and 9 exploded shell remnants in several territories of Azerbaijan.

Two Special Mine Search and Cleaning teams from Turkey numbering 135 personnel are assisting the Azerbaijani combat engineers to search and destroy the mines and handmade explosives in the liberated territories. Moreover, a total of 12 teams and 64 personnel, including three Handmade Explosive Detection and Destruction teams and nine Explosive Detection and Destruction teams of the Turkish Armed Forces are training the Azerbaijani sappers.

Twenty-three soldiers of the Azerbaijan Army successfully completed a 2-week long Specialist EOD (Explosive Ordnance Disposal) course in the Turkish city of Izmir from January 3-29. They returned to Azerbaijan earlier in February to join the mine-clearing operations in the country's Karabakh region.