Trump’s Iran Sanctions Are Hard-Hitting, But Not For Azerbaijan's Project 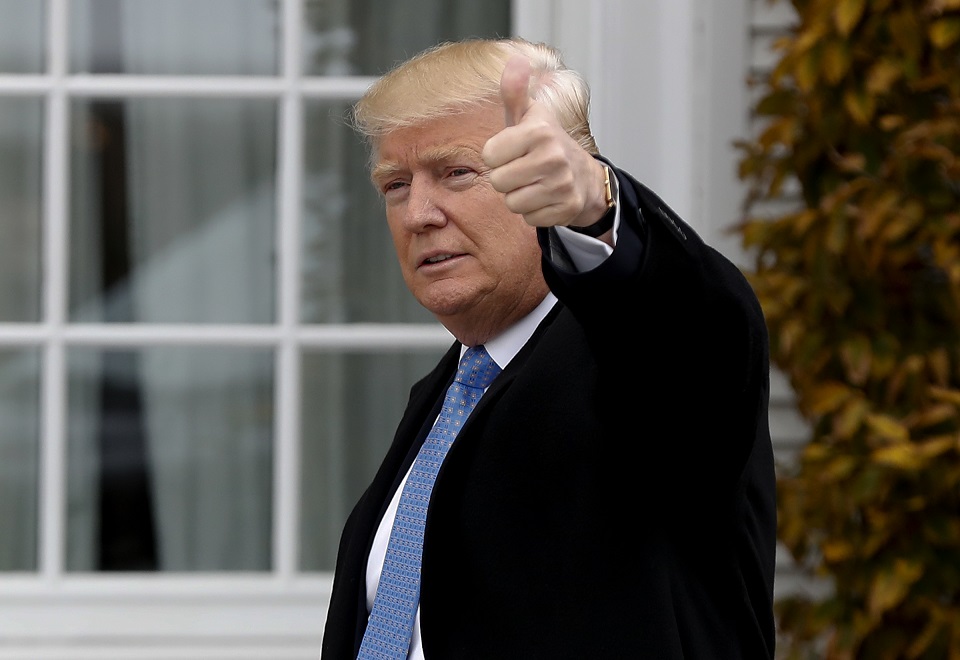 President-elect Donald Trump gives the thumbs up as he arrives at the Trump National Golf Club Bedminster clubhouse, on Nov. 20, 2016, in Bedminster, N.J. / Carolyn Kaster / AP

Energy cooperation with Iran has come under severe embargo jeopardy after President Donald Trump signed a sanctions package on Monday to squeeze the Caspian country from lucrative sales to energy-starved countries that import oil. But Azerbaijan and the transcontinental mega-pipeline Southern Gas Corridor got a pass.

Iran’s Naftiran Intertrade Company (NICO) is an investor in the project, which received an exception to sanctions, as Europe will rely on the corridor to provide energy to at least 10 million homes after it comes online in 2020.

S&P Global Platts, a world-leading provider of oil and gas price and market information, said on Tuesday that Washington gave guarantees to shelter the Southern Gas Corridor against the sanctions placed on Iran, which are a result of President Trump pulling the U.S. from the Joint Comprehensive Plan of Action (JCOPA), better known as the ‘nuclear deal’.

“BP had been seeking a sanctions waiver for its development of Azerbaijan's offshore Shah Deniz fields, the source of the Southern Gas Corridor's natural gas,” S&P Global Platts said in a statement issued on August 7.

BP is the operator and largest shareholder in Azerbaijan's offshore Shah Deniz gas fields, which will feed the Southern Gas Corridor pipeline. The company faces the risk of being hit by the new sanctions, which promise to ban companies from the U.S. financial system if they continue to do business with Iran.

“Trump's order contained a ‘natural gas project exception’ that describes the Southern Gas Corridor without naming it,” S&P Global Platts reported. “The order referenced the Iran Threat Reduction and Syria Human Rights Act of 2012, a U.S. law that describes an exemption for ‘the development of natural gas and the construction and operation of a pipeline to transport natural gas from Azerbaijan to Turkey and Europe.’”

The corridor already provides up to six billion cubic meters (bcm) of gas for Turkey and will provide an additional 10 bcm to Europe, serving about 2.4 percent of the EU’s natural gas needs. The corridor measures 3,500 kilometer (2,175 miles) and consists of three segments: the South Caucasus Pipeline (SCP), the Trans-Anatolian Pipeline (TANAP) and the Trans Adriatic Pipeline (TAP). The $40 billion project carries natural gas trapped in the Shah Deniz field in the Caspian Sea via the corridor, which ends in southern Italy after traversing five countries and the Adriatic Sea.

The SCP Expansion project was completed this year. Both SCP and TANAP went online this year on May 31 and June 12, respectively. As of this month, 76 percent of TAP had been completed and will be ready to receive 10 bcm of gas annually beginning in 2020. Turkey has been purchasing the remaining six bcm since June 30.

Vugar Bayramov, head of the Baku-based Center for Economic and Social Development, says the U.S. sanctions waiver for the corridor proves the project’s regional and global significance in light of European energy security.

“The U.S. administration rarely makes exceptions to its sanctions packages and the Southern Gas Corridor is one of the unique examples in this regard,” Bayramov told Caspian News.

“Azerbaijan will ultimately be pumping 31 bcm of natural gas to markets in Turkey and Europe via the pipeline, meant to be an all-new alternative source for diversifying the U.S. ally’s energy supplies.”

“The sanctions waiver is a strategic decision by the U.S. that can be considered as a gesture by Washington to its partnership with Azerbaijan and Europe. If the project’s realization would have failed due to sanctions, Azerbaijan could be suffering seriously,” he said, noting that Azerbaijan has invested about $20 billion in the project.