Tesla Electric Cars Could Be Produced in Russia and Kazakhstan 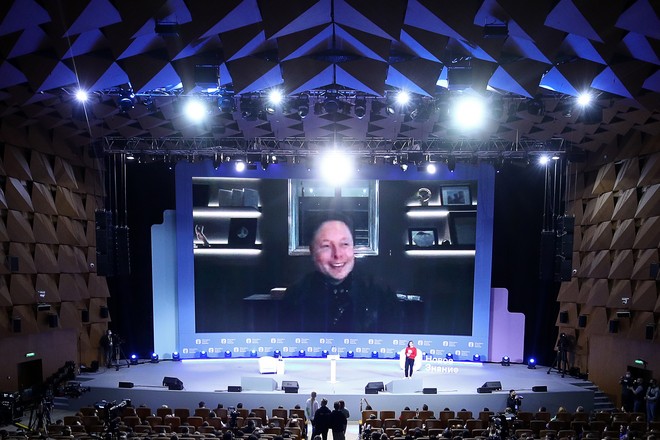 Musk, who joined the forum at the invitation of Kremlin spokesman Dmitry Peskov, touched upon everything from Mars exploration to religion and the future of humanity. / Sergei Bobylev / TASS

Tesla is moving forward with its plans to expand its presence globally, eyeing the Caspian region’s largest countries, namely Russia and Kazakhstan, as potential sites for producing emissions-free vehicles.

Tesla CEO Elon Musk has recently voiced the company’s interest in opening production facilities outside of the U.S. and China, where the US-based electric vehicle manufacturer already owns production sites. According to Musk, Russia is among the countries where the carmaker could “potentially” build a factory.

“I think we are close to establishing a Tesla presence in Russia. I believe that would be great,” tech billionaire Musk said on Friday in his video address to a Kremlin-supported educational marathon titled “New Knowledge.”

Tesla’s chief executive further added that his company is also keen on opening a business in Kazakhstan and other CIS countries.

The New Knowledge marathon is an electronic group workspace designed to support the process of knowledge building. In its 2021 edition, the forum lasted three days and spanned across Moscow, St. Petersburg, Nizhny Novgorod, Kazan, Sochi, Vladivostok, Novosibirsk, and Kaliningrad.

Musk, who joined the forum at the invitation of Kremlin spokesman Dmitry Peskov, touched upon everything from Mars exploration to religion and the future of humanity. He answered questions from Russian students for around 40 minutes.

Launched in 2003, Tesla strives to create a future with no fossil fuel dependency and zero emissions due to sustainable transport and energy obtained through solar power. With the headquarter in the US, Tesla also operates factories in China and Germany. The German factory has not yet begun operations.

In 2008, the company started production of their first car model, Roadster, based on Tesla’s cutting-edge battery technology and electric powertrain. Between 2012 and 2020, Tesla introduced an all-electric five-door liftback Model S sedan, Model X SUV, the higher volume Model 3 sedan, and the Model Y crossover. The Model 3 is considered the world’s all-time best-selling plug-in electric car, with more than 800,000 cars sold over December 2020.

Tesla’s innovative technology, modern design, and high performance triggered high consumer demand for its cars. The company’s global vehicle sales reached 499,550 units in 2020, demonstrating a 35.8 percent increase over the previous year. As of 2020, the company has produced one million electric cars.

Along with electric cars, the US-based company produces battery energy storage from home to grid-scale, solar panels, solar roof tiles, and other related products and services.

Meanwhile, eco-friendly electric cars are gaining momentum in Russia, where over 11,000 vehicles are already on the road. According to data provided by Autostat, there were 700 Tesla models registered in Russia as of early 2021. The government of Russia has introduced a series of measures meant to probe the popularity of electric cars, including a temporary elimination of import taxes on electric vehicles, which will last through this year.

Kazakhstan, a country bordering Russia, continues to improve infrastructure for electric vehicles and introduce measures to make green cars more appealing. As of mid-2019, there were about 700 eco-friendly electric cars in Kazakhstan. As of today, Nur-Sultan has more than 50 charging stations for electric vehicles.