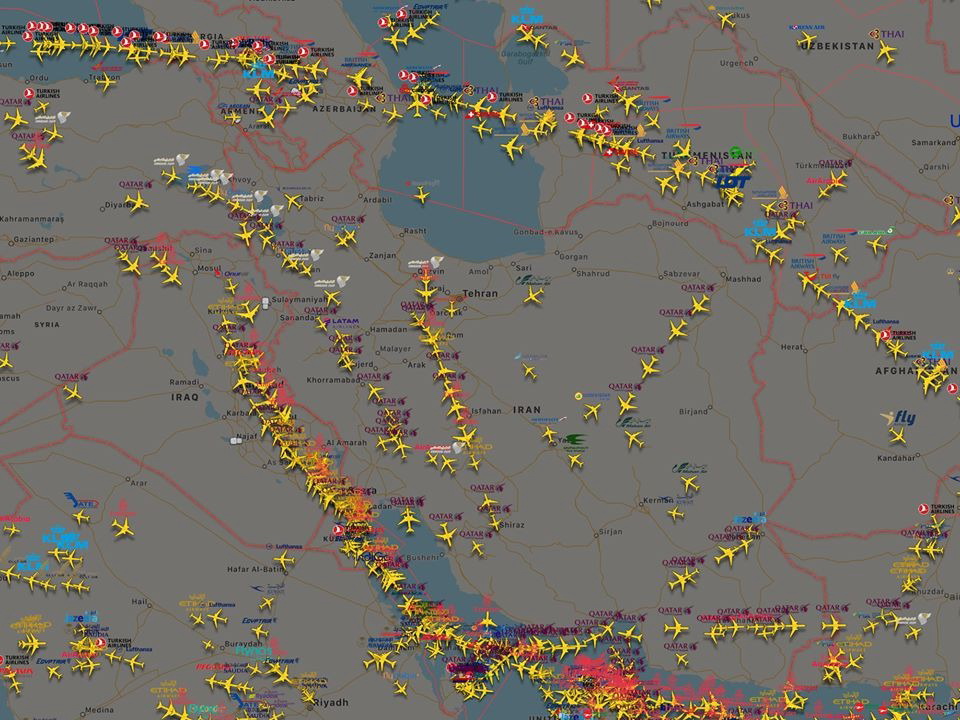 Recent air traffic through airspaces of Azerbaijan and Turkmenistan / Flightradar24.Com

Amidst heightened tensions between Iran and the United States, and Iranian officials admitting a passenger jet was unintentionally shot down from the sky on January 8, airlines around the world are avoiding flying over Iran and Iraq, operating their flights via alternative routes.

Flightradar24, the world’s most popular service for real-time flight tracking, revealed on Thursday that flights through the Caspian Sea region’s airspace are on the rise, given the safety precautions taken by many airlines to refrain from flying over Iran and Iraq.

“A much busier northern corridor through Azerbaijan and Turkmenistan in the early hours of 9 January as many airlines reroute around Iraq and Iran,” reads a post published to the official Facebook page of Flightradar24.

Iran’s airspace had been used mainly for flights from Singapore to Berlin. Flights from Kuwait to London travel through Iraq’s airspace.

Authorities from Azerbaijan’s national flag carrier Azerbaijan Airlines (AZAL) confirmed that transit flow through the country's airspace has considerably increased in the past week.

“Based on international agreements with the center in Brussels, coordination of changes in the flow of aircraft was carried out and the needs of airlines that laid out routes through the airspace of our country were met,” said Pasha Kesamanski, head of the press service of AZAL, according to 1news.az.

AZAL officials, however, said that the company and its low-cost subsidiary Buta Airways are not planning any changes to their schedule and the routes for flights to Iran, as well as transiting through Iranian airspace.

The change in transcontinental flight routes comes on the heels of an escalation between Iran and the United States, after U.S. President Donald Trump ordered the killing of Iranian General Qasem Soleimani, who headed a branch of the Islamic Revolutionary Guards Corps (IRGC), in a drone strike in Baghdad on January 3. Iran hit back on January 8 by launching dozens of ballistic missiles on two airbases in Iraq that house American troops.

No deaths were reported as a result of the barrage of missiles, but all 176 people aboard Ukraine International Airlines flight PS752 were killed when Iran’s military overreacted to the passenger plane flying overhead and shot it down.

The flight was en route to Kyiv from Tehran and came down near Imam Khomeini Airport shortly after take-off. Victims included dozens of Iranians and Canadians, as well as citizens of Ukraine, the U.K., Germany and Afghanistan. Protestors have reportedly taken to the streets in Iran after officials admitted the jet was struck by a missile.

Amidst tensions, airlines in many countries refrained from launching their aircraft through the troubled region. Russia’s Federal Air Transport Agency recommended national airlines to avoid flying over Iran, Iraq and the Persian and Oman gulfs. Russian carriers Ural Airlines and S7 have consequently announced changes to their routes.

The U.S. Federal Aviation Administration said there could be, “potential for miscalculation or misidentification” for civilian aircraft in the airspaces of Iran and Iraq, and some parts of the Gulf region and banned American carriers and pilots from flying over.