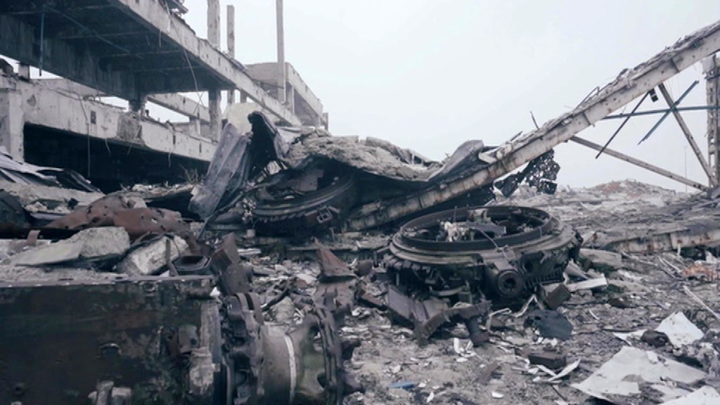 The so-called line of contact between Ukrainian forces and separatist-held territory has seen a dramatic increase in ceasefire violations last week.

Tensions in eastern Ukraine have escalated after several explosions were reported by the Russian media in the separatist region of Donbass, prompting fears of a full-scale Russian invasion.

A blast was heard early on Monday morning in the Donetsk airport area in eastern Ukraine, according to Russian state news agency RIA Novosti. The agency claimed the explosion was heard from several kilometers away.

Earlier last week, TASS reported three explosions at gas pipelines in different districts of Lugansk. The reports came after the security situation deteriorated in Donbas, the separatist region in eastern Ukraine, which has remained outside of governmental control since the conflict erupted in 2014. Ceasefire violations in eastern Ukraine have continued along the line separating Ukrainian forces and pro-Russian armed separatists in recent days, with both parties trading accusations over violations.

Russia’s Federal Security Service (FSB) said on Monday that a projectile fired from Ukraine has destroyed a building used by Russia’s border force in the Rostov region, around 150 meters from the Russian-Ukrainian border. Kyiv has denied taking offensive actions and says its soldiers are under strict orders not to escalate tensions in the region.

Last week, the Ukrainian military’s command center in the east reported increased shelling by Russian-backed forces, including the shelling of a kindergarten, which left two people injured.

The so-called line of contact between Ukrainian forces and separatist-held territory has seen a dramatic increase in ceasefire violations last week. According to the data compiled by observers from the Organization for Security and Cooperation in Europe, more than 1,500 ceasefire violations in east Ukraine were accounted for on Saturday - the highest number seen this year.

The blasts sparked speculation that the “false flag” operation is now underway. Earlier, Western officials had warned that Moscow would potentially accuse Kyiv of aggression toward separatist regions to justify its invasion of Ukraine.

Russia’s decision to extend military drills in Belarus has only fueled concerns that Moscow is planning an imminent Ukraine invasion. Although the decision was reportedly taken due to military activity near the borders of Russia and Belarus, as well as the situation in eastern Ukraine’s Donbas region, US Secretary of State Antony Blinken warned that the move is a sign suggesting Russia is about to invade.

A conflict between Ukrainian government forces and Russian-backed armed separatists in Donetsk and Lugansk, two provinces in eastern Ukraine that have announced their independence, resulted in the international community’s involvement to help calm tensions between Moscow and Kyiv. By June 2014, representatives from Germany, France, Ukraine and Russia formed what has been termed the Normandy contact group, or Normandy format, which seeks to resolve the situation in eastern Ukraine.

More than seven years have passed since the signing of the Minsk agreements, which are supposed to reintegrate the self-proclaimed separatist regions into Ukraine. However, this never happened and once-developed industrial regions have been impoverished by the war.

The separatist regions of Donetsk and Lugansk unilaterally announced their independence from Kyiv in 2014. Since the start of the war, the Kremlin has been accused of exerting control over both regions, with some suggesting Moscow eventually wants to claim the region as Russian territory.