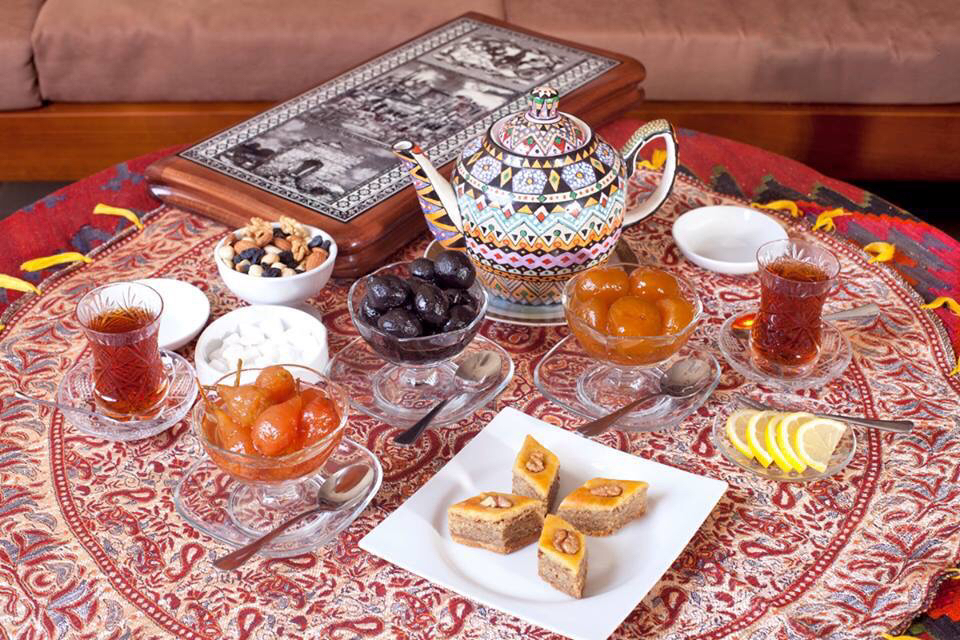 Tea is most often associated with the British, but they might as well be Azerbaijanis.

“For the Azerbaijanis, drinking tea is a kind of addiction. We cannot live without tea,” Tahir Amiraslanov, head of the National Culinary Center in Baku, told Caspian News.

No matter what the time of year or event, the fragrant beverage holds a special place in the country which is often called “the land of fire.” Tea ceremonies lay the foundation for auspicious occasions throughout one’s lifetime, such as marriage and childbirth.

Called chay in Azerbaijani, tea and tea customs reflect ancient traditions and local hospitality. Black tea is often served to guests, poured into the traditional armudu glass, or pear-shaped glass, said to keep tea hot at the bottom while helping it cool faster at the top, maintaining a constant temperature.

Tea is sometimes spiced with cinnamon, cardamom leaves, or a piece of lemon or ginger to add some extra flavor. Although Azerbaijanis prefer drinking sweet tea, they do not put sugar directly into the drink; instead they dunk a sugar cube, then bite a piece off and sip their tea. This method is said to have medieval roots, when rulers who were afraid of being poisoned tested their tea by dunking a piece of sugar in the liquid that was supposed to react to the sugar if lethal.

The drink is often accompanied by serving fig, strawberry, apricot, walnut, blackberry and other jams. It is no wonder that locals drink tea with a snack, or as a dishleme, which means "bite" in Azerbaijani.

Every chaykhor, or tea connoisseur, knows his or her black tea to have a deep burgundy shade. Purrengi or "velvet tea," is commonly served in Azerbaijani tea houses and chaykhana, a favorite place for leisure and meetings that are Azerbaijan's analogue to European cafes.

“Earlier, chaykhana was a political center, but now tea drinking is an occasion for conversation, for an invitation, for communication and an opportunity to discuss the problems,” Amiraslanov said.

“We drink black tea with a piece of lemon, which absorbs all harmful substances and making tea more healthy,” added Amiraslanov.

The benefits of drinking tea go far beyond quenching one’s thirst. Tea is rich in antioxidants, which prevent the body from what could be described as rusting, helping to keep a person youthful and protecting the body from pollutants. Some researchers say that drinking one to four cups of tea per day can reduce the risk of a heart attack by 20 to 32 percent.

Indian and Chinese merchants have imported tea into Azerbaijan along the Silk Road since the first century AD. But the country’s history of tea-growing dates to much more recent times, to 1912.