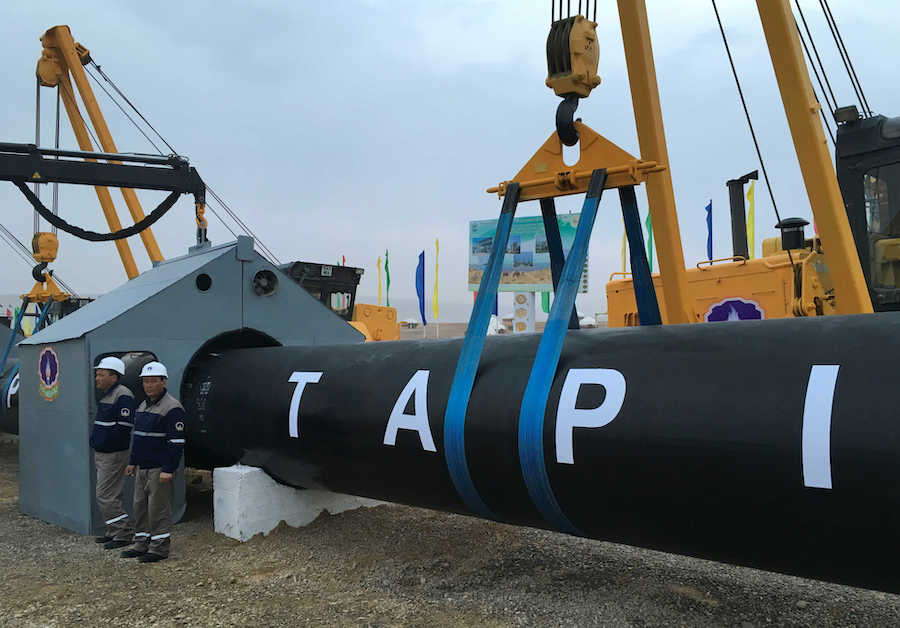 The 1814-kilometer pipeline has been designed for a 30-year period and is expected to supply about 33 billion cubic meters (bcm) of gas per year from Turkmenistan’s giant Galkynysh gas field through the Afghan cities of Herat and Kandahar, as well as the Pakistani cities Quetta and Multan. / Reuters

Construction of the nearly 2,000-kilometer TAPI pipeline which would transport Turkmenistan’s natural gas to India and Pakistan through Afghanistan received a significant boost this week as officials from Ashgabat and Kabul inked another deal to move forward with the ambitious project after years of delays.

On August 31, a tripartite memorandum of understanding was signed in Kabul as part of a meeting between Muhammetmyrat Amanov, chief executive of the TAPI Pipeline company, Mahmoud Karzai, who heads Afghanistan’s urban development and borders ministry and Mohammad Haroon Chakhansuri, Afghanistan’s minister of mines and petroleum.

“A memorandum will be signed to acquire lands [in Afghanistan] based on the route of the TAPI project and the plan of action will soon enter its practical phase,” Chakhansuri said before signing the document, according to a report by Afghanistan-based Khaama Press news service.

TAPI was first proposed 22 years ago when Turkmenistan and Pakistan initialed a memorandum of understanding, but construction was delayed due to geopolitical circumstances. Work on the $10 billion gas pipeline finally began in Turkmenistan in 2015. Following an agreement between Afghanistan, India and Pakistan, gas would be purchased from Turkmenistan and then transported to the western and southern territories of Afghanistan, as well as central Pakistan and northwestern parts of India.

The 1814-kilometer pipeline has been designed for a 30-year period and is expected to supply about 33 billion cubic meters (bcm) of gas per year from Turkmenistan’s giant Galkynysh gas field through the Afghan cities of Herat and Kandahar, as well as the Pakistani cities Quetta and Multan. The pipeline ends at the Indian city of Fazilka, located near its border with Pakistan. Five bcm out of the entire volume will be absorbed by Afghanistan, while Pakistan and India will receive 14 bcm each.

The pipeline was expected to begin operations in 2020, but its launch has been repeatedly postponed despite Pakistan completing all preparatory work. On its part, Afghanistan claimed it began preparation in early 2018, but said work on the pipeline has not yet begun due to bureaucratic difficulties.

Afghan government officials are convinced that some documents required for the inauguration of the project have not been approved, including those related to land acquisition. According to Abdul Qadir Mutfi, a spokesman for the mines and petroleum ministry, Afghanistan should sign three additional agreements with Turkmenistan. “After that construction work for the project will begin,” he said in January, according to a report by Tolo News.

Officials from the TAPI Pipeline company said that construction of the Afghan section would begin in early 2021 upon the completion of land acquisition.

Meanwhile, India has already completed its part of the project. Turkmenistan, on its part, has laid and welded 206.9 km out of 214 km of pipe within its section of TAPI as of March 2020.

TAPI is expected to boost the economies of participant countries, as well as the region.

“This promising project opens an abundance of opportunities for the export of energy resources to South Asian markets through the Islamic Republic of Afghanistan. The project is also aimed at the comprehensive integration of neighboring Afghanistan into the architecture of global stability,” read the statement issued by Turkmenistan’s foreign ministry.

Turkmenistan’s President Gurbanguly Berdimuhamedow believes the construction of the TAPI pipeline will create thousands of job opportunities for Afghans, as construction settlements for workers need to be built, as well as mini-power stations, new roads and various trade enterprises. He added that Afghanistan is expected to rake in more than $400 million annually in transit duties alone from the project.