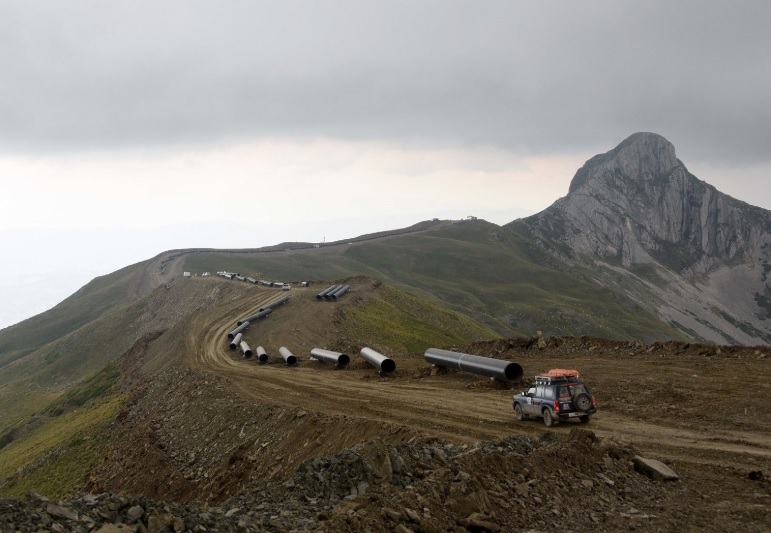 TAP pipeline reaches the highest altitude at approximately 2,100 meters in Albania’s mountains while going as far as 820 meters low beneath the sea. / TAP Twitter

Nearly all of the onshore portion of the Albanian section to the Trans Adriatic Pipeline (TAP) has been completed, before the structure dips beneath the Adriatic Sea and runs its final course towards southern Italy.

Nearly 213 kilometers of the pipeline’s overland portion that runs through the eastern European country of Albania have been completed, and authorities are getting ready to break ground for the 37 kilometers that will run offshore.

TAP is one of the three integral parts that comprise the Southern Gas Corridor, the natural gas mega-pipeline that runs from Azerbaijan to Italy, while traversing four countries in between – namely Georgia, Turkey, Greece, and Albania. The offshore part of TAP starts near the coastal town of Fier in Albania and connects to Italy’s grid near the village of San Foca.

The Southern Gas Corridor measures 3,500 km (2,175 mi) and includes, besides TAP, the South Caucasus Pipeline and the Trans-Anatolian Pipeline (TANAP). The corridor will supply 10 billion cubic meters (bcm) of gas annually to Europe, while supplying an additional six bcm per year to Turkey. Turkey has already started receiving gas as of June, while Europe will start receiving its imports by 2020.

TAP stretches along 878 kilometers through Greece (550 km), Albania (215 km), the Adriatic Sea (105 km), and Italy (8 km). It will reach its highest altitude at approximately 2,100 meters in Albania’s mountains while going as far as 820 meters low beneath the sea.

The pipeline has been under construction since 2016 and is expected to be completed by the end of this year. The total cost of TAP alone is estimated around €4.5 billion ($5.3 billion), while investments in the Albanian section of the pipeline account for €1.5 billion ($1.75 billion) – considered the largest foreign direct investment in the southeastern European country.

The Paris-based credit insurer COFACE identified foreign investments – in particular, those related to energy – as the major booster for cash inflows into the economy of Albania, which has a gross domestic product (GDP) of about $13 billion. COFACE’s January report stated that the economic growth of Albania is expected to increase this year due to investments in infrastructure, especially that related to energy, as a result of the TAP.

The realization of the project is also assisting the government of Albania in improving the country’s inland road infrastructure. At the end of 2016, within the first phase of road infrastructure renewal, TAP finished the upgrade of 58 km of access roads, construction of two new bridges and refurbishment of 40 bridges across the territory of Albania.