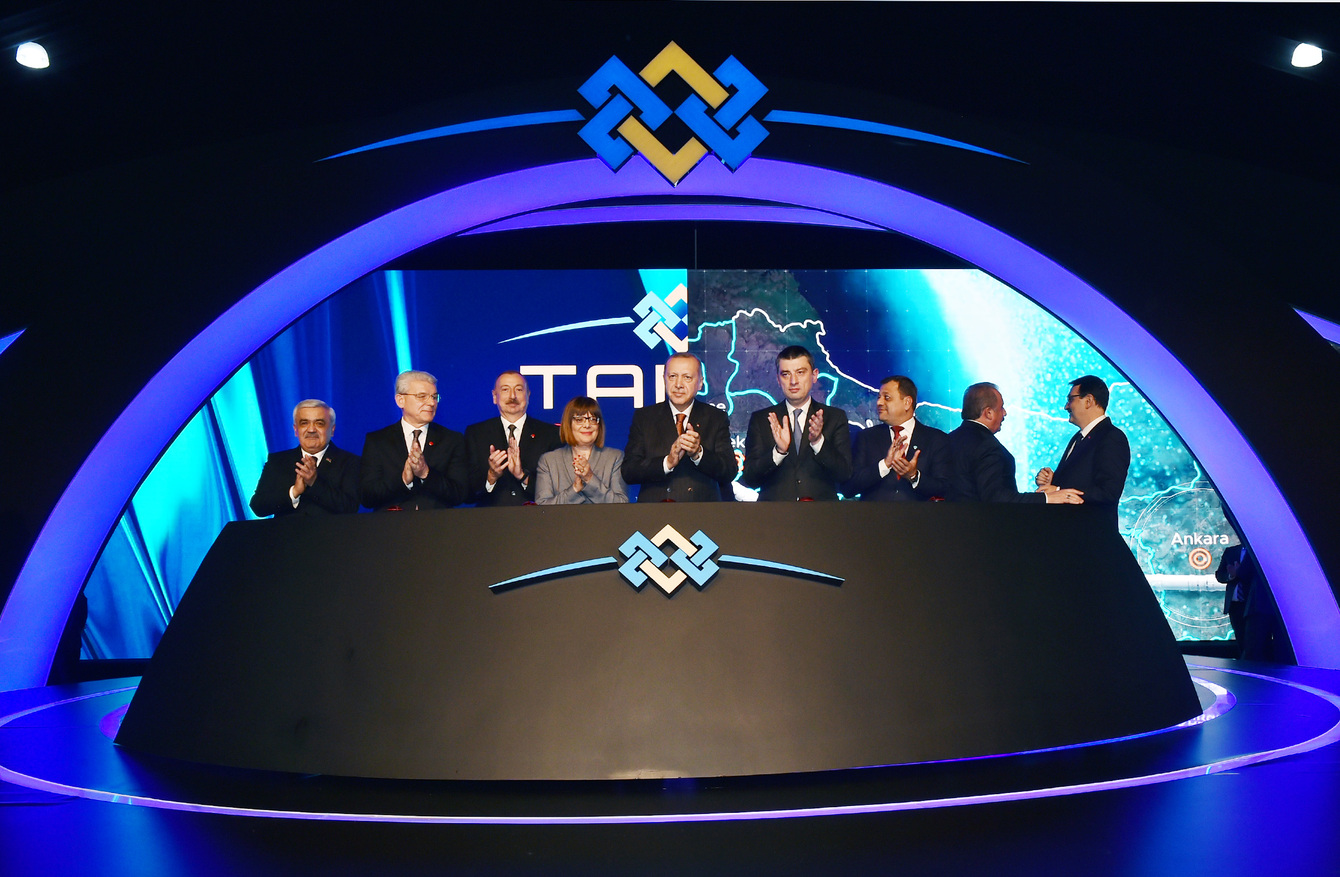 Officials from Azerbaijan, Turkey, Georgia, Bosnia and Herzegovina, and Serbia at the opening ceremony of the final phase of TANAP pipeline, Edirne, Turkey, 30 November, 2019 / President.Az

Natural gas extracted from the Shah Deniz field beneath the Azerbaijani sector of the Caspian Sea has reached the border of the European Union, when the Trans Anatolian Pipeline (TANAP), forming one of three segments to the Southern Gas Corridor, joined with the Trans Adriatic Pipeline (TAP) in Edirne, Turkey, on the country’s border with Greece.

Officials from Azerbaijan, Turkey, Georgia, Bosnia and Herzegovina, and Serbia attended a ceremony on November 30 held to mark the occasion. President Ilham Aliyev of Azerbaijan said in his speech that the project is more than just about energy.

“This project leads to cooperation, stability, long-term mutual understanding, and it would be wrong to consider these projects simply as energy projects,” President Aliyev said. “TANAP is part of the Southern Gas Corridor. The Southern Gas Corridor is a major infrastructure project with a financial cost of $ 38 billion and consists of four projects,” he explained, according to the president’s official website.

TANAP joined to TAP as the construction of the latter nears completion. Ninety percent of the 878-kilometer (546-mile) TAP segment has been finished; once complete next year, TANAP will pump Azerbaijani gas into the pipeline and provide 10 billion cubic meters (bcm) of gas per year, powering anywhere from seven to 10 million households in Europe.

From Greece, TAP extends into Albania before dipping beneath the Adriatic Sea to make its final stop in southern Italy.

The three-segmented Southern Gas Corridor’s largest and most expensive chunk is TANAP, which measures 1,878 kilometers (1,167 miles) in length and has a price tag of approximately $7 billion. When it was completed in 2018, gas was already being pumped from Shah Deniz to Turkey, delivering what is an additional six bcm on top of what the entire corridor will supply to Europe.

The event held at the Turkish-Greek border on Saturday marked a milestone in the effort to diversify Europe’s energy supplies, as well as the importance of Azerbaijan as contributing to it.

The director of the London-based think tank Transatlantic and Caucasus Institute, Ziba Norman, said TANAP and TAP are joined at a time when Europe is looking beyond its usual vendors such as Russia.

“As recent trends in European cities show, the EU needs cleaner energy. Natural gas is part of a long-term strategy for the transition to clean energy,” Norman told Trend. “In the United Kingdom alone, 80 percent of domestic heating is gas-dependent, with 25 percent of the country's total energy consumption coming from gas, and just under half of that volume is imported.”

“Azerbaijan enhances its economic security in the region and contributes to strengthening geopolitical stability with such projects, deepening its ties with Europe and maintaining stability in the Balkans.”

Twenty-eight countries and a combined population of 512 million people in the European Union (EU) saw 401 billion cubic meters of gas imported in 2018, which is 0.6 percent more than in 2017. Russia and Norway topped the list of exporters into the EU. The net pipeline gas imports shared 82 percent of the overall European gas purchase. In 2010, this figure stood at 69 percent.

Although TAP ends in Italy, its transit route and geographic location allow it to join the energy grid of Southeastern Europe. Croatia, Montenegro, Bosnia and Herzegovina, and Albania plan to connect TAP to the Ionian-Adriatic Pipeline (IAP), a bi-directional pipeline that will be built in western Balkans running from Fier in Albania through Montenegro, and Bosnia and Herzegovina, to Split in Croatia. In Fier, IAP is expected to join TAP and in Split, it will plug in the existing gas transmission grid of Croatia.