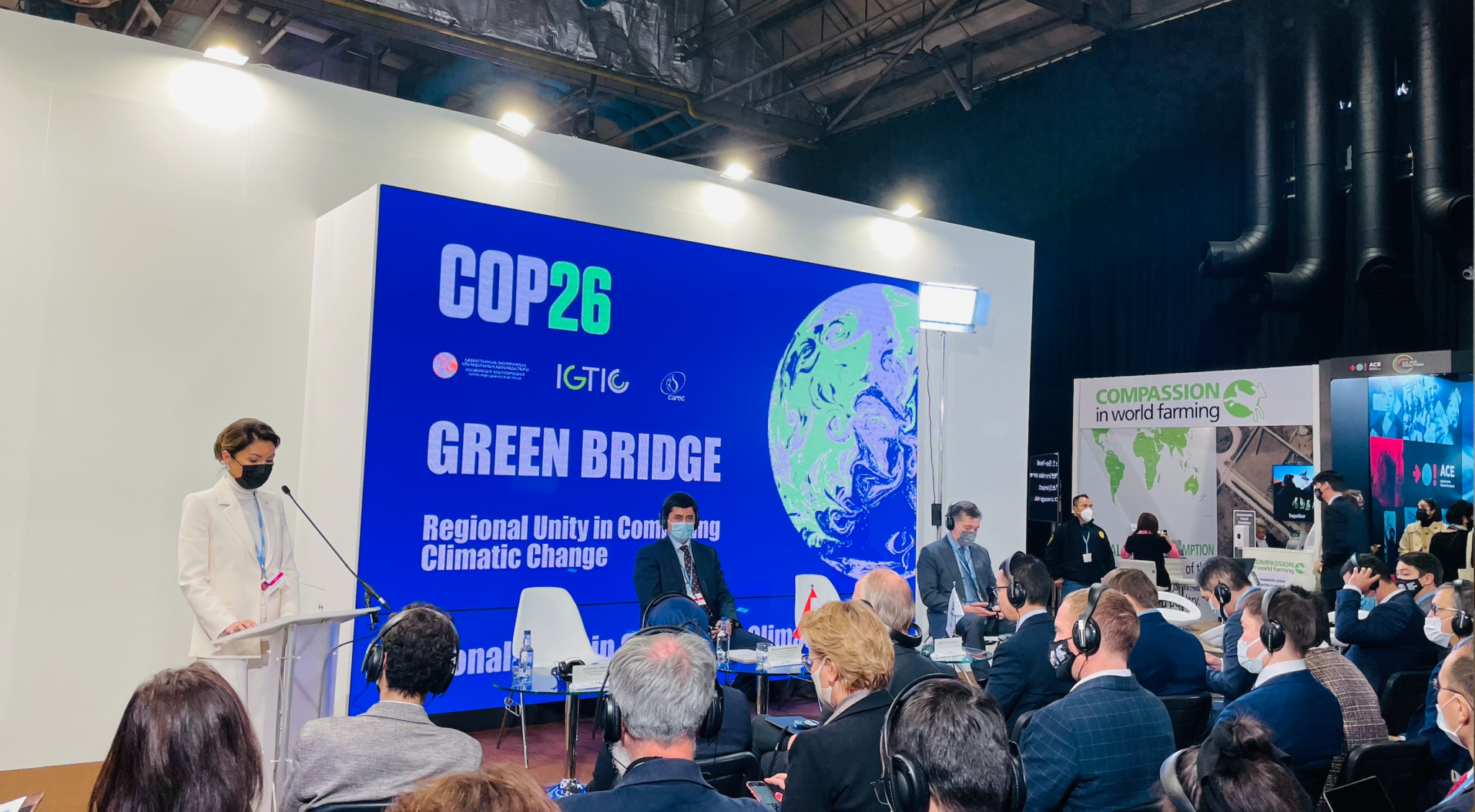 Aliya Nazarbayeva, who chairs the Association of Environmental Organizations of Kazakhstan, while addressing the event as part of the UN Climate Change Conference in Glasgow. / Astana Times

Tajikistan has joined the Green Bridge Partnership Program initiated by Kazakhstan to find ways to address the climate challenges in the Central Asian region.

Officials from Dushanbe and Nur-Sultan signed the program’s Charter as part of the 26th session of the Conference of the Parties (COP) of the UN Framework Convention on Climate Change (UNFCCC). The event, which is being held in Glasgow, brought together governments from around the globe to agree on coordinated action to tackle climate change.

“To achieve climate goals, we are signing the Green Bridge Charter,” Tengrinews quoted Bahodur Sheralizoda, the Chairman of the Tajik Committee for Environmental Protection, as saying.

“This will allow us to come closer to the goals and joint efforts of the region to combat climate change,” he added.

The Green Bridge Partnership Program is an international environmental initiative, which aims to promote the transfer of cutting-edge technologies, knowledge sharing, and financial support to create sustainable economies and new long-term green jobs. The program was initiated in 2010 by former Kazakh President Nursultan Nazarbayev.

The program was approved by the UN General Assembly and received the status of an interregional mechanism for the transition to a green economy at the UN World Summit.

“More than ten countries have joined the Charter. And today Tajikistan is joining this family,” Aliya Nazarbayeva, who chairs the Association of Environmental Organizations of Kazakhstan, said while addressing the event.

“Our countries understand that it is necessary to unite the efforts of the entire region, as well as international institutions for a successful struggle to preserve the climate. This is a vital issue for the sustainable development of the region,” Nazarbayeva added.

She further voiced Kazakhstan’s readiness to take the lead in the transfer of green technologies and to serve as a coordinator in Central Asia for clean technology development.

Climate change is among the most pressing problems for Central Asia, a region already highly vulnerable to natural disasters such as droughts, floods, earthquakes, and mudslides.

A joint Central Asian Pavilion had been organized at this year’s climate conference to draw the global community’s attention to the climate change impact on Central Asia. For the first time in the history of the UNFCCC, the countries of Central Asia had a chance to voice their consolidated position on climate change as one region at the COP.

As Central Asia’s largest country, Kazakhstan strongly encourages its neighbors to coordinate efforts in shaping the climate agenda. During the Glasgow climate summit, Kazakhstan proposed creating a climate hub for Central Asia to attract green investments and solve environmental challenges at the regional and transboundary levels.

Despite sitting atop one of the world’s largest reserves of fossil fuels, Kazakhstan is committed to reaching a 15 percent share of renewable energy in the country’s energy mix by 2030. To make this happen, the government adopted the Concept for Transition to Green Economy in 2013, which sets clear targets for building a stable and efficient economic model based on renewable resources.

Kazakhstan has also played a host to the EXPO 2017 exhibition, a modern-day version of the World’s Fair themed ‘future energy.’ The event lasted four months, brought together more than 130 countries and nearly 4 million visitors, and helped pave the way for increased attention on the country. As the host country, Kazakhstan has used the opportunity to showcase its vision of an economic transformation centered on renewable energy.