Spring’s Arrival Is Celebrated Throughout The Caspian 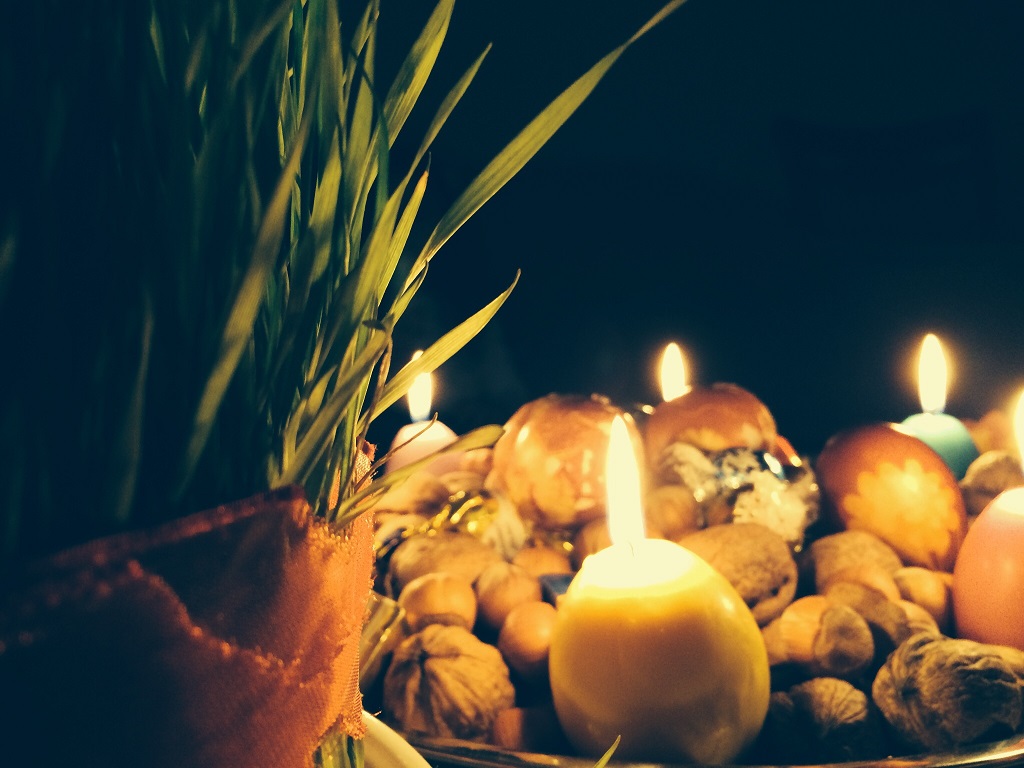 For ten million population of Azerbaijan, Samani, or green sprouting wheat, tied with a red ribbon is the central symbol on the table, meant to represent revival and abundance / Flickr

Welcoming Spring is as big of a deal for cultures in the Caspian region as is ringing in a New Year on January 1 for those living in, say, New York, Paris or Berlin. Why? Because the vernal equinox, the start of Spring, is the start of a new year. Novruz, which means “new day”, is celebrated on March 21 and marks the start of spring.

This ancient holiday is celebrated by millions who mark it with folk traditions and special foods. With a history stretching over three millennia, Novruz has ties with the ancient monotheistic religion called Zoroastrianism. Azerbaijan, Iran, Kazakhstan and Turkmenistan – all Caspian littoral states – as well as other Central and Western Asian countries help keep 3,000-year old traditions alive.

Family gatherings and visiting neighbors, ensuring an end to rifts between those who had major disagreements over the past 12 months, setting lavish tables with national dishes, and playing traditional games are all things people do to celebrate a holiday that has withstood the tests of time.

But not all cultures that recognize Novruz celebrate it in quite the same way. Caspian News set out to explore how the various cultures and peoples found throughout the region celebrate the holiday, from Azerbaijan to as far away as central Russia.

Rituals and food are at the center of Novruz celebrations for the 10 million population of Azerbaijan. National pastries such as pakhlava, shekerbura, goghal and badambura; as well as savory dishes like plov (similar to pilaf, as it is known in the West), which is made with rice should be put on the festivity table as a Novruz tradition. Family members gather around a large dining table, which has a khoncha – a tray filled with pastries – as its centerpiece, decorated with various kinds of nuts, dried fruits and candles. Samani, or green sprouting wheat, tied with a red ribbon is the central symbol on the table, meant to represent revival and abundance.

A common belief in Azerbaijan says that everyone should ring in Novruz at his or her own home rather visit relatives and neighbors. If you won't be at home for the holiday, says the folk belief, you will spend the whole year on trips away from the home.

Fortune telling is a traditional ritual that is an inseparable part of Novruz celebrations in Azerbaijan, and eavesdropping is probably one of the most popular pastimes. People listen by placing their ear against a door, trying to hear what the house owner talks about. If the talk is good, good things will happen to the listener – otherwise, rainy days are comings.

Another Novruz ritual has romantic love at its core. Girls who are engaged try to determine the amount of their fiancé’s love for them by untying knots tied to a thread by their friends. If she can untie the knots, the engaged girl can be certain her beau is crazy about her. If she cannot, she may have to test his love.

No holiday in Kazakhstan is complete without traditional food, including dastarkhan – the Kazakh variety of pilaf – as well as rounded or diamond-shaped pieces of fried dough called baursaks; and Nauryz kozhe, a special soup that is a symbol of abundance.

Although families tend to prepare Nauryz kozhe in their own way, using seven specific ingredients is a must. These include boiled meat, meat broth, boiled cereals like rice or wheat, and dairy products such as kefir, or sour cream; kurt also known as qurut; and kumys – the smooth and creamy yogurt-based beverage made from mare’s milk. When you dip your spoon into Nauryz kozhe for the first time, be sure to make a wish – Kazakhs say it will come true!

People celebrate Novruz collectively, giving gifts to each other, as they believe this holiday brings people closer together. The National Spring Festival in this Caspian country features sports competitions, trade fairs, theatrical performances, concerts, special exhibitions and outdoor festivities. The most popular event, by far, is horse racing, in a country where a special breed called Akhal-Teke, or “golden horses,” get decorated with an expensive harness and have their elegant torsos covered with embroidered blankets as they are paraded into competitions.

Holiday dishes have cereal grains at their center, as well as dairy products. Novruzyarmasy is a special recipe to welcome Spring, made with chopped wheat grains added to a boiling meat broth and cooked for three to four hours. Some cooks add dried or candied fruit, ground black pepper and various spices.

Russian Orthodoxy is the main religion in what is the Caspian region’s and world’s largest country, but Russia’s sizeable Muslim minority population has brought Novruz to it. Every year Muslim-majority republics of the Russian Federation such as Dagestan, Tatarstan and Bashkortostan welcome the start of Spring with a grandiose extravaganza.

In Tatarstan, located at the confluence of two biggest rivers in the European part of Russia – the Volga and the Kama – thousands of people from various ethnic groups gather in the central square of Kazan, the capital city of the republic, where music concerts are not complete without singing and dancing, as residents welcome Novruz Bayram.

Food stalls are set up along the square where you could taste pilaf, shashlik – also known as kebab – and up to 10 different kinds of flatbread cooked in tandyr, a special clay oven.

If you are traveling to Tatarstan in March, try not to miss a chance to attend trade fairs, where Tajiks, Kyrgyzstanis and representatives of other diaspora populations in Russia present their national products.

In Iran, Nowruz is the first day of the first month, known as Farvardin, in the Iranian calendar.

For Iranians, the Haft-Sin is to their celebration what a decorated tree is to an American at Christmas. The special table is laid out with seven items that have a symbolic meaning and represent a new season. Each item begins with the Persian letter sin (pronounced “seen”), or “s.”

The primary Haft-Sin items are seeb (apple), sabze (wheat growing in the dish), samanoo (a sweet pudding made from wheat germ), senjed (dried Persian olive), sekke (coin), seer (garlic), and serkeh (vinegar). Sometimes instead of Serkeh they put somagh or sumac – a popular Middle Eastern burgundy-colored spice that is typically served with raw onion and accompanies kebabs and other meat dishes.

The 13th day of the Iranian new year is called Sizdah Bedar and marks the end of the nearly two-week long celebrations. It is spent mostly outdoors, when people will leave their homes to go to the parks or out in the countryside for a picnic with family and friends.