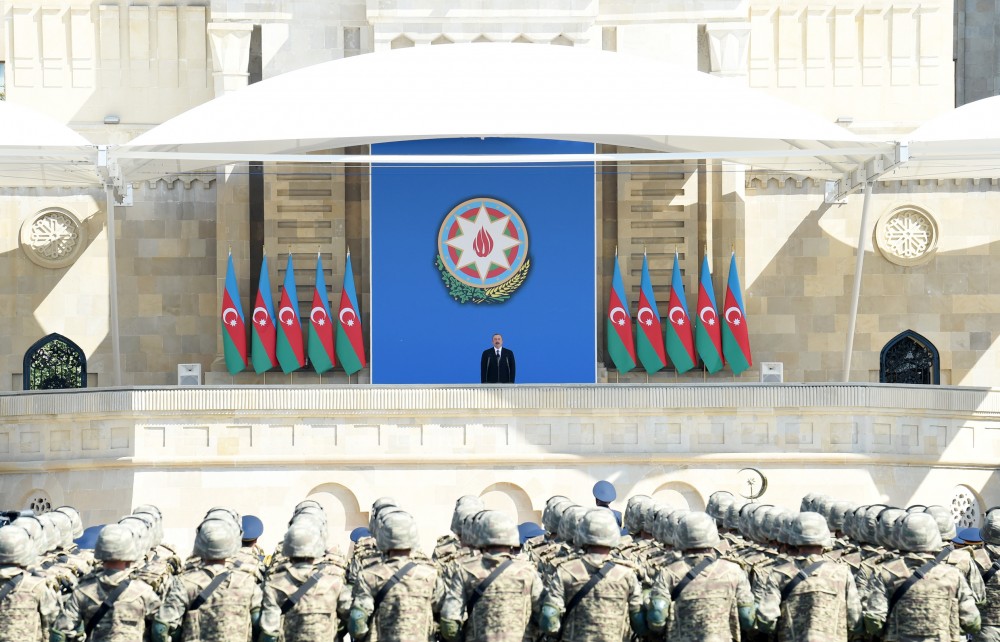 Freedom Square, an iconic landmark in central Baku, played a host to a military parade complete with 4,000 people on Tuesday, to mark the 100th anniversary of the Azerbaijan’s armed forces.

“In recent years, the most modern [military] equipment and weapons have been purchased,” Azerbaijan’s President Ilham Aliyev said in his speech.

“Among them, there are hundreds of armored vehicles, guard ships, warships, air defense systems, dozens of the most up-to-date fighter jets,” President Aliyev said while noting the accomplishments of a modern military force that has its origins in the Azerbaijan Democratic Republic (ADR), founded in 1918.

The forces that now defend the Republic of Azerbaijan, which regained the independence in 1991 following the collapse of the Soviet Union, also have modern artillery installations, long-range missiles, rocket-propelled missile systems, operational-tactical missile complexes that all “increases our military power,” President Aliyev noted.

“We are doing all this to make the Azerbaijani army is even stronger [and] to strengthen our military potential. I can say that Azerbaijan is one of the rarest countries on the global scale in regard to the army’s material and technical supply.”

Armed Forces Day is one of 13 public holidays in a country of just under 10 million, which borders the energy-rich Caspian Sea to the east, has Russia to its north, and Iran to the south. The country’s late President Heydar Aliyev created the holiday on May 22, 1998.

The ADR was founded as the Russian Empire was on the decline and freedom sentiments brewed amongst what are a Turkic people in the South Caucasus and Caspian regions of western Asia. Russia’s collapse necessitated creating an army that would safeguard both internal order and borders of a newfound republic against external threats. The creation of the army came as a result of the ADR’s adoption of a Declaration of Independence, which ushered in a short-lived but independent state that called for freestanding armed forces.

On June 26, 1918, the ADR – the first democratic republic in the Muslim world, which gave men and women equal voting rights even before the U.S. or the U.K. – announced the creation of the army. Approximately 25,000 soldiers were recruited, and defense spending comprised roughly 24 percent of the state budget. By August 1 of the same year, the ADR armed forces were placed under the newly-established Military Ministry. The first military parade took place a year later, in 1919.

Today the armed forces of the Republic of Azerbaijan consist of the Land Forces, the Air and Air Defense Force, and the Navy. Associated forces include the National Guard, the State Border Service, and the Internal Troops of Azerbaijan.

The Azerbaijani army has fought a war with its western neighbor, namely Armenia, over the Nagorno-Karabakh region that belongs to Azerbaijan and internationally recognized as part of its sovereign territory. The Nagorno-Karabakh and seven adjacent territories of Azerbaijan are kept under occupation by Armenia since the early 1990s.

Global Firepower, a website that provides data on and ranks national militaries around the world, identifies the Armed Forces of Azerbaijan as the strongest in the South Caucasus region, which also includes the countries Armenia and Georgia. In its 2018 rankings Global Firepower put Azerbaijan at 53 out of 136 countries worldwide, having defense budget of almost $1.6 billion. Armenia and Georgia ranked 84 and 82, respectively.

“More than 20 military plants have been established in recent years. These plants produce 1200 types of military products and equip our army. At the same time, we have already started exporting military products. Azerbaijan also receives the most up-to-date weapons and equipment from many countries,” President Aliyev said in his speech on Tuesday.

The parade provided an opportunity for the armed forces to show off some of their weapons. More than 240 military vehicles, including the most recent armored machines; missile and artillery installations, air defense systems, and over 70 types of aircraft, helicopters, unmanned aerial vehicles were on full display for locals and visitors alike.

“Today’s army is far too ahead of the power it had ten years ago,” Lieutenant of the Azerbaijan Armed Forces Fakhri Eyvazov told Caspian News.

“The army is ready both morally and technical and materially to fulfill any task set before it, be it national or global. We have proven our strength in numerous cases with the most recent operations in April of 2016 and June of 2018, when a sudden unexpected attack of the Armenian forces were repelled, and hectares of our occupied territories were liberated from under the occupation.”

Eyvazov was referring to the Four Day War, or April War, that took place from April 1-4, 2016. It is considered the largest escalation of force between Armenia and Azerbaijan since the war they fought during their early years following the dissolution of the USSR. The war, which erupted as a result of a midnight attack by Armenian forces on Azerbaijani positions in the Nagorno-Karabakh region, included the use of the Harop kamikaze drone, a killer UAV produced by Israel. Armenia’s Defense Ministry reported seven of its military volunteers killed as a result of Harop’s attack on a bus carrying them to the battlefield.

In June, the Armed Forces of Azerbaijan regained control of roughly 11,000 hectares (27,000 acres) of land that Armenia had been occupying in Nakhchivan, an Azerbaijani exclave sandwiched between Turkey, Armenia and Iran.