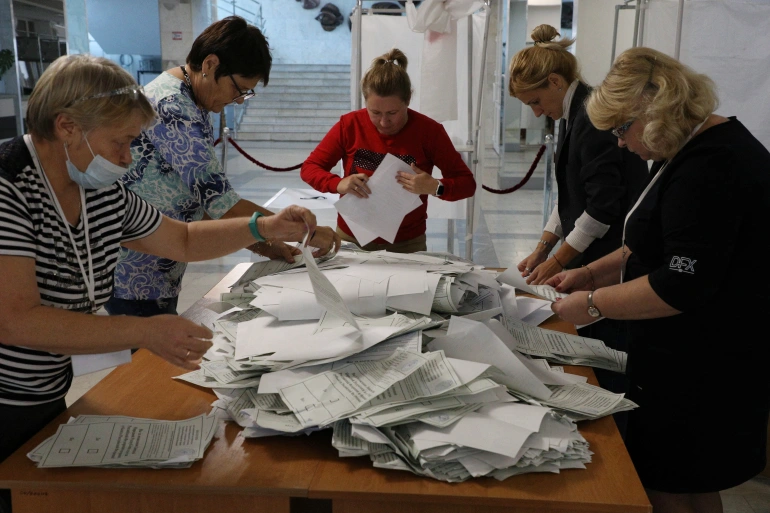 The “referendums” running from September 23-27 were held in the southern Ukrainian regions of Kherson and Zaporizhzhia, and eastern Donetsk and Luhansk, which together make up about 15 percent of Ukrainian territory. / Alexey Pavlishak / Reuters

Separatist authorities from four regions in Ukraine mostly controlled by Russian forces reported the overwhelming majority of residents voted in favor of joining Russia following the results of the so-called “referendums” that have been widely dismissed by Kyiv and Western countries as a sham.

The “referendums” running from September 23-27 were held in the southern Ukrainian regions of Kherson and Zaporizhzhia, and eastern Donetsk and Luhansk, which together make up about 15 percent of Ukrainian territory.

Russian state media reported that all of the ballots had been counted in the Ukrainian regions with a “yes" result gathering between 87.05 and 99.23 percent of the votes.

The results were hailed in Russia as Vyacheslav Volodin, the speaker of the Russian State Duma, said that “the adopted decision saves millions of people from genocide.” Commenting on the results of “referendums”, Volodin said this “gives us the opportunity to make plans for the future together.”

Meanwhile, Ukrainian President Volodymyr Zelensky has blasted the so-called “referendums”, stating that Russia falsified the results, and vowed to continue fighting to reclaim the lands that have been lost.

“This farce in the occupied territory cannot even be called an imitation of referendums,” Zelensky said in a video address late on Tuesday.

Meanwhile, US Ambassador to the United Nations Linda Thomas-Greenfield introduced a resolution condemning Russia over the “referendums”, calling on member states not to recognize any change in Ukraine and obligating Russia to withdraw its troops.

“Russia’s sham referenda, if accepted, will open Pandora’s box that we cannot close,” the US ambassador said in her remarks at a UN Security Council Briefing on Ukraine on Tuesday. “We ask you to join us in reaffirming our commitment to the UN Charter and meeting this challenge head-on.”

Some experts believe the “vote” will pave the way for Russia's formal annexation of parts of Ukraine after almost seven months of the war. Such a move is likely to take the war to a new and more dangerous level, with Moscow portraying any attempt by Ukraine to regain its internationally recognized territories as an attack on Russia's sovereignty.

The Kremlin used this tactic in 2014 when it held a hastily called referendum in Ukrainian Crimea, which was also condemned by the West as illegal and illegitimate. The Moscow-backed referendum reportedly revealed that more than 90 percent of Crimea’s residents wanted the peninsula to be under Russian control. A few days after the vote, which was declared illegitimate by Ukraine, Western countries, and the United Nations, Russian President Vladimir Putin announced that Crimea had joined Russia.

The ongoing war began when Russia’s troops entered the country on February 24. President Putin claimed the aim of the "special operation" was to protect the people of two self-proclaimed separatist-controlled regions of Ukraine allegedly being attacked by the Ukrainian military. Before invading Ukraine, Russia recognized the so-called Donetsk and Lugansk People’s Republics as independent entities.