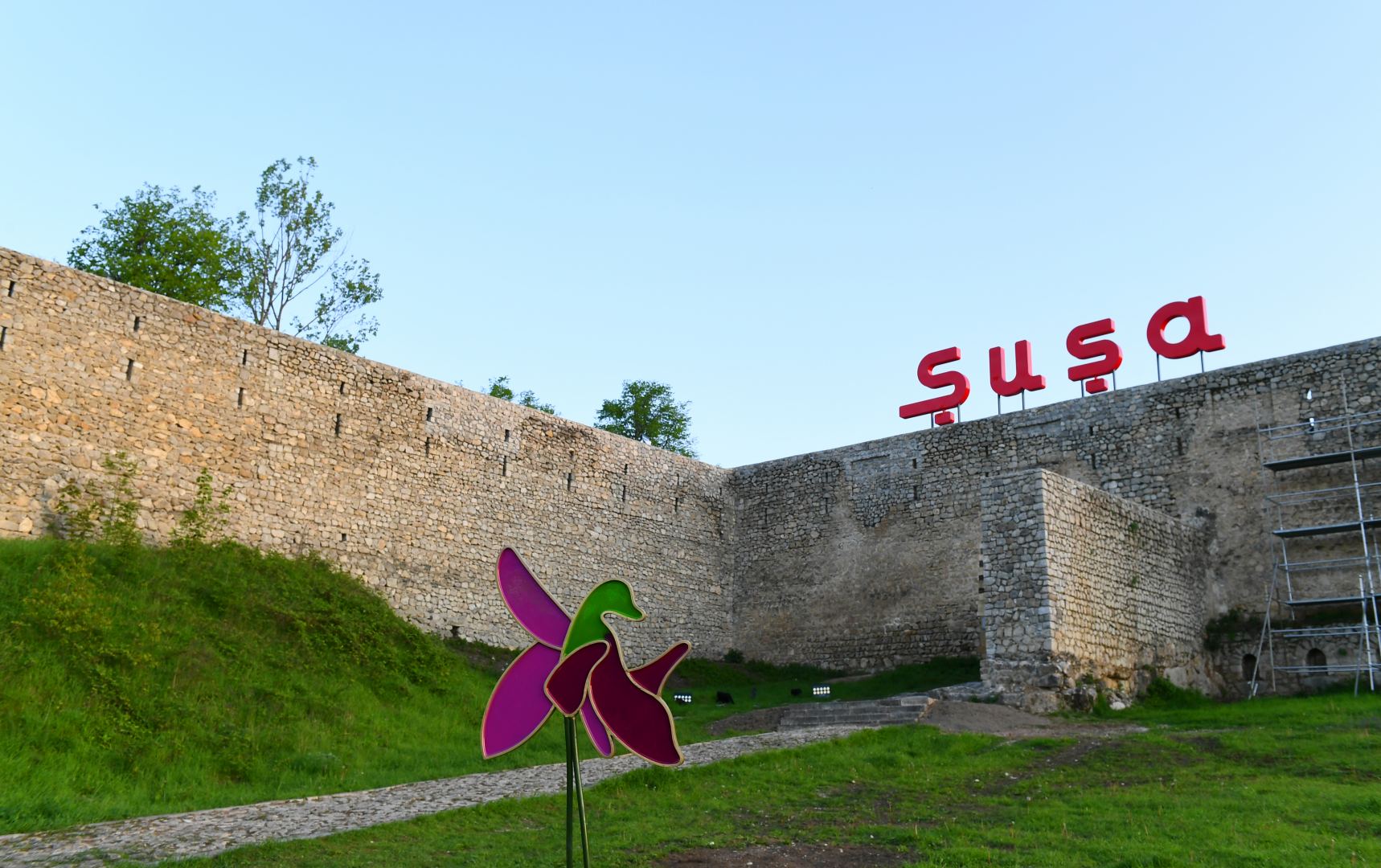 The gates of the Shusha castle at the entrance to the city of Shusha, Azerbaijan / Courtesy

The Azerbaijani Diaspora convened in the city of Shusha as part of the Fifth Congress of World Azerbaijanis this week. About 400 diaspora representatives from 65 countries reportedly attended the event.

"Today we are holding a Congress of World Azerbaijanis in free Karabakh and free Shusha. The name of this congress is Victory Congress, and this is natural," President Ilham Aliyev said in his opening speech at the Congress.

"Because for the first time after the historic Victory, Azerbaijanis from all over the world are gathering to hold a congress. In general, the name Victory is very appropriate for our people ... Azerbaijanis living abroad are a great force. Their activity is significant for our country."

Hikmat Hajiyev, Assistant to the Azerbaijani President and the Head of the Foreign Policy Affairs Department of the Presidential Administration, said serious tasks have been set before the national diaspora, including mainly the prevention of provocations and dirty propaganda against Azerbaijan, a more active presentation of the realities of Azerbaijan to the international community and participation in the sociopolitical life in the countries of residence and activity.

A new composition of the Coordinating Council of World Azerbaijanis has also been approved at the event. President Ilham Aliyev was elected as chairman of the council, while Fuad Muradov, chairman of the State Committee on Work with Diaspora, was authorized as the council’s executive secretary. The two-day event wrapped up on Saturday.

High-level meetings are nothing new for Shusha — a city in the Karabakh region of Azerbaijan that was liberated during counter-attack operations in the fall of 2020.

The city has hosted a conference attended by top-level delegations from Azerbaijan and the United Nations to celebrate the 30th anniversary of the establishment of mutual relations in March 2022.

The International Organization of Turkic Culture, known as TURKSOY, has recently declared Shusha the cultural capital of the Turkic world for 2023. A series of events are expected to take place in the city next year.

Shusha is a key city in the Karabakh (Garabagh) region due to its geographic location and historical significance as one of the major cultural, economic, and administrative centers of Azerbaijan.

Shusha was founded during the reign of the Azerbaijani Karabakh khanate's Panahali khan in the 18th century. According to historical sources, Panahali khan decided to build an "eternal and invincible fortress in a firm and impassable place in the mountains" given the unfavorable location of previous castles. Construction of the city kicked off in 1752 at about 1,600 meters above sea level in Karabakh, and the capital of the khanate was moved to the city in 1756-1757.

Shusha has long been one of the main administrative, economic and cultural centers of Azerbaijan since its establishment by indigenous Azerbaijanis. At the end of the 18th century, Shusha became one of the important trade centers in the entire South Caucasus region. Shusha had trade relations with the Ottoman Empire, Russia, Iran, India, and various European countries.

Shusha is to Azerbaijan what Vienna is to Austria and Naples is to Italy in terms of music. The city is well known as "the temple of Azerbaijani music" and the conservatory of the South Caucasus. Shusha is home to one of the leading schools of Mugham, the traditional Azerbaijani genre of vocal and instrumental arts that have influenced music throughout the Caspian and Middle East regions. The founding father of Azerbaijani composed classical music and opera, Uzeyir Hajibeyli, was born in Shusha. The city was also home to world-famous Azerbaijani poet Molla Panah Vagif and poetess Khurshudbanu Natavan.

Following the dissolution of the Soviet Union in 1991, Armenia launched a military campaign against Azerbaijan that lasted until a ceasefire was reached in 1994. Armenia occupied 20 percent of Azerbaijan’s internationally-recognized territories, namely the Karabakh region, including Shusha. Over 30,000 ethnic Azerbaijanis were killed and one million others were expelled from their lands in a brutal ethnic cleansing campaign conducted by Armenia.

The Azerbaijani army restored Azerbaijan’s sovereignty over the city of Shusha on November 8 during the 44-day-long counter-offensive operations from September 27 through November 9, 2020. Azerbaijani forces liberated more than 300 settlements, including the cities of Jabrayil, Fuzuli, Zangilan, Gubadli, and Shusha, from nearly a 30-year-long illegal Armenian occupation. The liberation of Shusha played a crucial role in the retreat of Armenia’s forces and the cessation of hostilities. The war ended with the signing of a tripartite statement by Armenia, Azerbaijan, and Russia on November 10, 2020. Armenia also returned the occupied Aghdam, Kalbajar, and Lachin districts to Azerbaijan as part of the obligations it agreed to under the agreement.

Shortly after its liberation, Shusha was declared the cultural capital of Azerbaijan. Currently, the city is being intensively restored and reconstructed under the direct guidance of President Ilham Aliyev. This year is celebrated as the “Year of Shusha” across Azerbaijan and the government plans to open the city of Shusha for tourist arrivals in 2023.