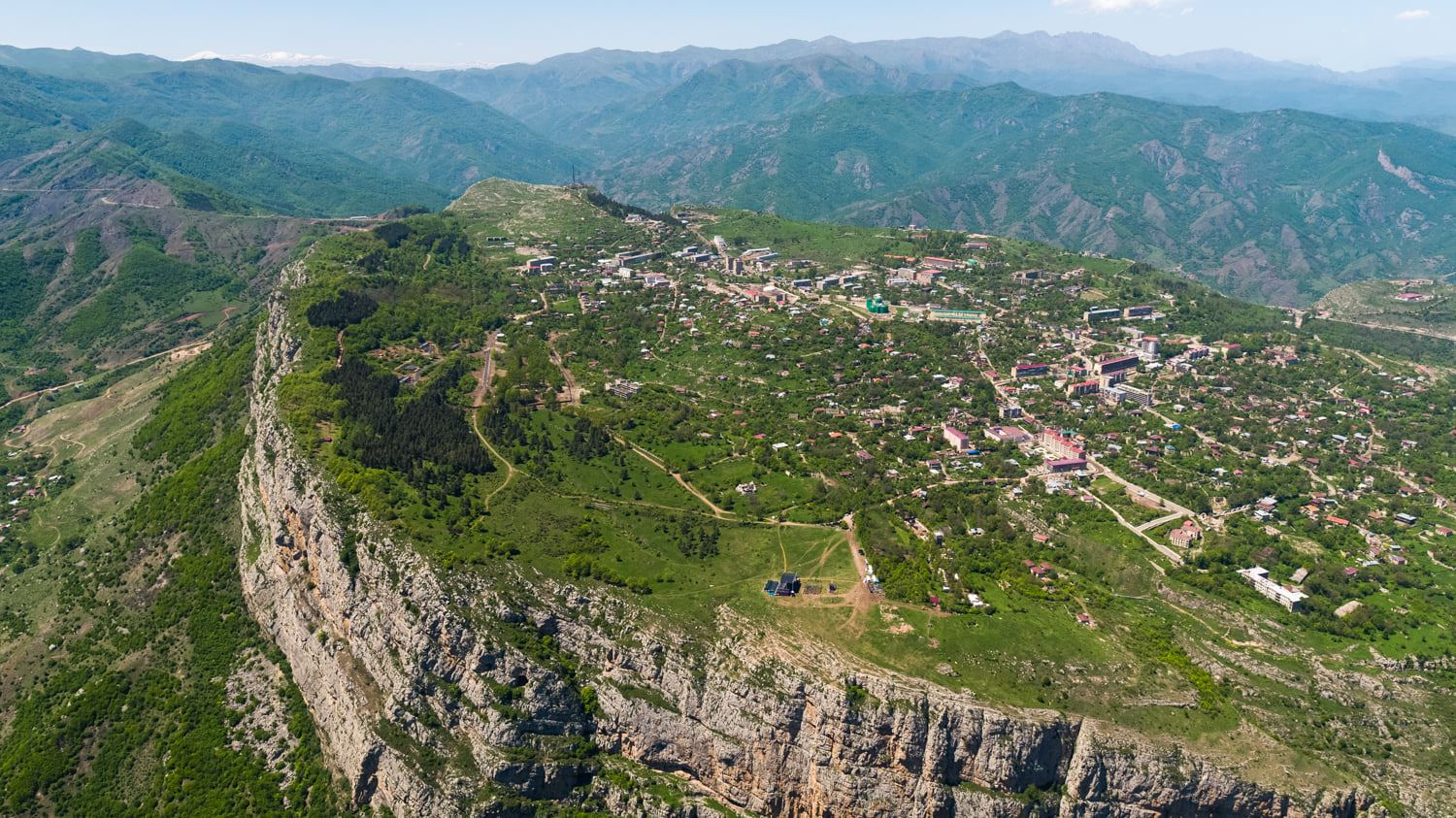 Azerbaijan’s Shusha city has recently been declared the “Cultural Capital of the Turkic World for 2023”. The announcement was made at an extraordinary ministerial meeting of the International Organization of Turkic Culture, known as TURKSOY, in the Turkish city of Bursa on Thursday.

“TURKSOY's choice proved once again that Shusha belongs to the Turkic world. We believe that Shusha, with its culture and history, will make a significant contribution to the development of the cultural heritage of the Turkic world,” Azerbaijan’s Culture Minister Anar Karimov said.

He said that the ministry’s main goal for 2023 would be to promote the city of Shusha through exhibitions, festivals, concerts, and other cultural events and programs.

Shusha was already honored as the cultural capital of Azerbaijan in an order signed by President Ilham Aliyev in May 2021, shortly after the city’s liberation from Armenian occupation in November 2020. Also in January, President Aliyev declared 2022 the “Year of Shusha” in Azerbaijan, celebrating the 270th anniversary of the city’s foundation.

Currently, Shusha — which was destroyed and looted by Armenians during 28 years of occupation from 1992 to 2020 — is being rapidly rebuilt by the Azerbaijani government. It will reportedly be open for tourism in 2023.

The city has already played host to the grandiose Kharybulbul Music Festival in May 2021 — a cultural extravaganza that marked the return of Azerbaijan’s multicultural traditions to the city after almost thirty years of forcible separation. Vagif Poetry Days — a prestigious festival to honor Azerbaijan’s great poet and public figure Molla Panah Vagif, who served as a vizier to the Karabakh khan Ibrahimkhalil in the khanate’s capital Shusha — also took place.

More recently, Shusha hosted a conference dedicated to the 30th anniversary of the establishment of relations between the United Nations and Azerbaijan. High-level delegations from both sides attended the meeting to discuss the development of mutual relations, as well as the liberated territories of Azerbaijan.

Shusha is an important city in the Karabakh (Garabagh) region due to its geographical location and historical significance as one of the major cultural, economic, and administrative centers of Azerbaijan.

Shusha was founded during the reign of the Azerbaijani Karabakh khanate's Panahali khan in the 18th century. According to historical sources, Panahali khan decided to build an "eternal and invincible fortress in a firm and impassable place in the mountains" given the unfavorable locations of previous castles. Construction of the city kicked off in 1752 at about 1,600 meters above sea level in Karabakh and the capital of the khanate was moved to the city in 1756-1757.

Shusha has long been one of the main administrative, economic and cultural centers of Azerbaijan since its establishment by indigenous Azerbaijanis. At the end of the 18th century, Shusha became one of the most important trade centers in the entire South Caucasus region. Merchants brought various goods to Shusha from other Azerbaijani cities such as Baku, Sheki, Nakhchivan, and Ganja. Shusha had trade relations with the Ottoman Empire, Russia, Iran, India, and various European countries. Merchants from Shusha were regular participants at famous trade fairs in Leipzig, Germany, and Nizhny Novgorod, Russia.

The city also played a key role in the development of Azerbaijan's carpet weaving industry. Shusha was the Karabakh region's carpet-weaving center in the second half of the 19th century and carpets produced in Shusha were exported to global markets in the late years of the same century. The ornamental and plot groups of Shusha carpets defined the mainline trend in local carpet-weaving. Some of Shusha’s famous carpet-weavers were Meshedi Bayram Gurban-oglu, Djabbar Haji Akber-oglu, Fatima Aga Sherif-gizi, and Ahmed Dashdamir-oglu. They bagged awards at an international show in Paris in 1867. Shusha carpets also received prizes at the Moscow Polytechnic Exhibition in 1872.

In terms of music, Shusha is to Azerbaijan what Vienna is to Austria and Naples is to Italy. The city is known as "the temple of Azerbaijani music" and the conservatory of the South Caucasus. Shusha is home to one of the leading schools of mugham — the traditional Azerbaijani genre of vocal and instrumental arts that has influenced music throughout the Caspian and Middle East regions. The founding father of Azerbaijani-composed classical music and opera, Uzeyir Hajibeyli, was born in Shusha — a city also home to the world-famous Azerbaijani poet Molla Panah Vagif and poetess Khurshudbanu Natavan.

The city of Shusha — built by Azerbaijanis and inhabited by the ethnic Azerbaijani population — faced serious problems after the occupation by Tsarist Russia in the early 19th century. The Russian Empire made a decision to relocate Armenians from Iran and Turkey to Azerbaijani territories, including the Karabakh region, in the wake of a war that occurred between 1804-1812. Under the auspices of the Tsarist government, Armenians began to oust Azerbaijanis, who were the Karabakh region's indigenous inhabitants. Between 1905-1906, a bloody terror and genocide campaign was waged against Azerbaijanis, and, from 1918-1920, Armenians launched multiple armed attacks on Shusha but failed to occupy the city due to the heroic defense by Azerbaijanis.

With the establishment of the Soviet Union in 1922, Armenians in the Karabakh region of Azerbaijan further repressed the indigenous Azerbaijani population of the region. Granting autonomy to the so-called Nagorno-Karabakh region within Azerbaijan in 1923, and the choice of Khankendi as its center, deprived Shusha of its status as the region's administrative center. Subsequently, the quality of life for Azerbaijanis in the city significantly deteriorated and many historical and architectural monuments belonging to the Azerbaijani people were blown up and destroyed. The population of the city dwindled three-fold during the next 50 years. In 1917, Shusha had a population of around 44,000 people, but by 1970, their number had decreased to 14,000 following the massive expulsion of ethnic Azerbaijanis.

Following the dissolution of the Soviet Union in 1991, Armenia launched a military campaign against Azerbaijan that lasted until a ceasefire was reached in 1994. Armenia occupied 20 percent of Azerbaijan’s internationally-recognized territories, namely the Karabakh region, including Shusha. Over 30,000 ethnic Azerbaijanis were killed and 1 million others were expelled from their lands in a brutal ethnic cleansing campaign conducted by Armenia.

The Azerbaijani army restored Azerbaijan’s sovereignty over the city of Shusha on November 8, 2020 during a 44-day-long counter-offensive operation from September 27 through November 9, 2020. Azerbaijani forces liberated more than 300 settlements, including the cities of Jabrayil, Fuzuli, Zangilan, Gubadli, and Shusha, from a nearly 30-year-long illegal Armenian occupation. The liberation of Shusha played a crucial role in the retreat of Armenia’s forces and the cessation of hostilities. The war ended with the signing of a tripartite statement by Armenia, Azerbaijan, and Russia on November 10, 2020. Armenia also returned the occupied Aghdam, Kalbajar, and Lachin districts to Azerbaijan as part of the obligations it agreed to under the agreement.