Shanghai Cooperation Organization Wraps Up in Astana, Adds India And Pakistan To Its Ranks 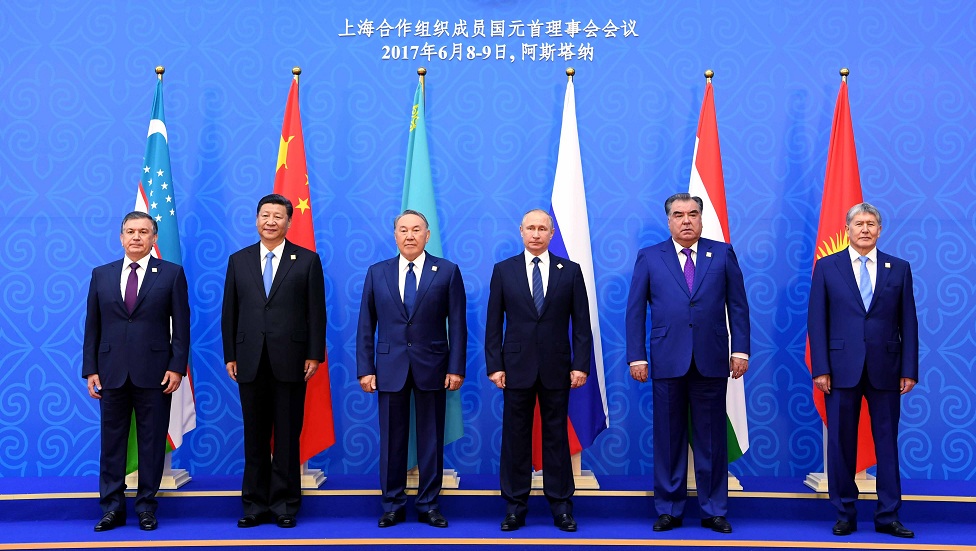 Expansion of the Shanghai Cooperation Organization (SCO), countering terrorism and violent extremism, and new opportunities for economic cooperation were at the top of the agenda at the multilateral body’s Heads of State Council meeting in Astana, which wrapped up Friday.

One of the top priorities at the two-day meeting, where presidents and prime ministers of SCO member states, delegations from SCO observer states, and representatives of major international organizations gathered, was the long-awaited incorporation of India and Pakistan into the SCO.

“Our current meeting, without any exaggeration, will become a historic event. For the first time, the body of the organization is expanding. Starting with today, the Republic of India and the Islamic Republic of Pakistan become full-fledged members of the SCO,” said Kazakhstan’s President Nursultan Nazarbayev, who chaired the meeting.

The SCO was created in 2001 by Russia, China, Kazakhstan, Kyrgyzstan, Tajikistan and Uzbekistan, and is the successor to the “Shanghai Five,” established in 1996 with the exception of Uzbekistan. The bloc had formed after the signing of a two border security coordination agreements, one in Shanghai, China in 1996 and another in Moscow the following year.

According to Nazarbayev the SCO is entering a new phase of institutional development, and dubbed the body the “Shanghai Eight.” Now with India and Pakistan added, the group encompasses about 40 percent of humanity and 20 percent of the world’s gross domestic product (GDP). Afghanistan, Belarus, Mongolia, and Iran currently hold observer status, although there is speculation that Iran may soon be eligible for membership.

For India, strengthening ties with Central Asia is a strategic goal, as its middle class grows and demands for energy resources comes with it. Several initiatives are already underway. The CASA-1000 electricity transmission system, for example, will transport electricity from Kyrgyzstan and Tajikistan to South Asia. The Turkmenistan–Afghanistan–Pakistan–India Pipeline (TAPI) project will deliver natural gas from the Caspian region, specifically Turkmenistan, through Afghanistan to Pakistan and then to India

During the summit in Astana, the heads of member states underscored their determination to step up coordinated efforts to counter common security challenges and threats, particularly in combating terrorism, separatism, and extremism.

The group has established the “three pillars”, that is, defining cooperation in the security, economic and cultural fields as the major areas of cooperation. But the main focus of SCO has been on security matters, although the organization does not position itself as a military bloc. Nevertheless,

The rise of extremism and radicalism has become a major threat to SCO members and observer countries. Terrorist acts have taken place in Kazakhstan, Russia, Afghanistan, and Pakistan in recent years, underscoring the urgency of the problem.

”The fight against terrorism should be system-wide and uncompromised. Along with eliminating social and economic causes of terrorism and extremism, we must do our best to neutralize the terrorist ideology”, Russia’s President Vladimir Putin said at the summit.

When the SCO was founded, the Shanghai Convention on Combating Terrorism, Separatism and Extremism concluded at the first summit and set the tone for the bloc’s fight against what it called the “three evils” of terrorism, separatism, and extremism. Since that time, security cooperation has expanded into realms like drug control, joint combat on crimes, information security, anti-money laundering and combating transnational organized crime.

Member States hold regular bilateral and multilateral counter-terrorism exercises and cooperate with one another at the agency level. Law enforcement agencies exchange information on a regular basis, train specialists together, file requests for investigative operations in their respective countries. The Regional Anti-Terrorist Structure (RATS), with its headquarters in Uzbekistan’s capital city Tashkent, was created in 2002 to oversee joint anti-terrorist exercises and coordinate SCO efforts.

On Friday, leaders signed 11 new agreements, including the SCO Convention on Countering Extremism, which is aimed at strengthening the security of all SCO member states, increasing the effectiveness of cooperation between agency bodies and improving legal frameworks to address the issue.

China assumed the rotating chairmanship of the SCO after Kazakhstan. The next meeting of the SCO Heads of State Council will be held in June 2018 in China.