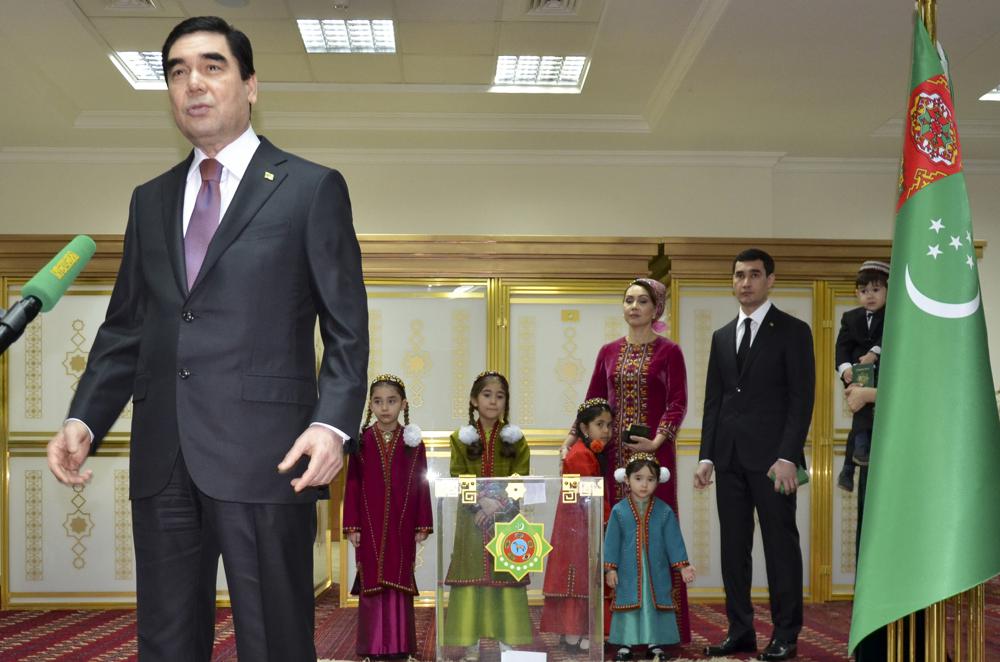 Turkmenistan President Gurbanguly Berdimuhamedow speaks to journalists after casting his ballot as his son Serdar Berdimuhamedow with other family members look on at a polling station in Ashgabat, Turkmenistan, February 12, 2017. / AP Photo

“In accordance with Article 76 of the Electoral Code of Turkmenistan and on the basis of a resolution of the Central Election Commission (CEC) of March 14, 2022, Deputy Chairman of the Cabinet of Ministers of Turkmenistan Serdar Gurbanguly Berdimuhamedow, who received 72.97% of the votes, was declared elected president of Turkmenistan”, a statement by the country's election commission on March 15, which was published on the Turkmenportal news website, said.

Along with Serdar Berdimuhamedow, who was a candidate of Turkmenistan’s ruling Democratic Party, there were eight other candidates on the ballot. These eight candidates received between 1.08% to 11.09% of the votes.

The presidential election in Turkmenistan, which was held on March 12, was viewed by some analysts as a formality to transfer political power from the incumbent president to his son, with a voter turnout of 97.17 percent.

President Berdimuhamedow, whose current term was set to end in 2024, also holds the posts of chairman of the Cabinet of Ministers, chairman of the State Security Council, supreme commander-in-chief of the Turkmen armed forces, and chairman of the Halk Maslahaty.

After casting his vote in the polling station on election day, Gurbanguly Berdimuhamedow described the snap poll as "open, equal, democratic and based on law," saying that "a historic presidential election is taking place today".

"We believe that our independent and neutral country will continue developing further," he added.

The election came after the incumbent president addressed an extraordinary meeting of the upper chamber of parliament on February 11, saying that “young leaders should be given way.”

Serdar Berdimuhamedow, 40, had been nominated as a presidential candidate on February 14. He was appointed Turkmenistan’s deputy prime minister in July 2021 and also headed the country’s oil and gas industry in November. Previously, he served as minister of industry and construction operations, deputy governor of the central Ahal Region, and deputy foreign minister.