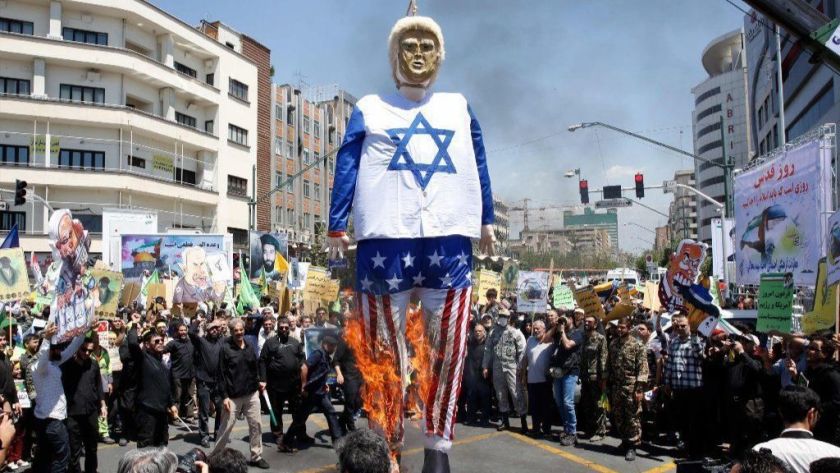 Iranian protesters burn an effigy of President Trump dressed in an Israeli flag during a rally to mark “Quds Day,” an annual demonstration against Israel, in June 2019. / AFP - Getty Images

The Iranian president, supreme leader, speaker and foreign minister have criticized the U.S. President Donald Trump’s Middle East peace plan dubbed “The Deal of the Century”, describing it as “despicable” and a “highway to hell”.

“Enough of these foolish attempts. The Most Despicable Plan of the Century,” Iran’s President Hassan Rouhani tweeted on January 29.

On Tuesday, President Trump met with Israeli Prime Minister Benjamin Netanyahu at the White House to unveil his peace plan dubbed the “Deal of Century” between Palestine and Israel, and termed Jerusalem (Al-Quds) as the capital of Israel.

According to the deal, the Palestinian state would not receive the whole of East Jerusalem. Instead, Palestine would receive neighborhoods that would be outside of a security barrier constructed by Israel, which will, in fact, serve as a border between the Israeli and Palestinian territories.

“To the dismay of U.S. politicians, the satanic, evil U.S. policy about Palestine — the so-called #DealOfTheCentury — will never bear fruit, by the grace of God. About the Jewishization of #alQuds and saying it should be in the hands of the Jews, they’re talking foolishly & unwisely,” the official Twitter account of the Islamic Revolution Leader Ayatollah Khamenei re-published his views on January 29 towards the document, summarizing his statement made in a meeting with Hajj officials on July 16, 2018.

“The issue of #Palestine will never be forgotten. The Palestinian nation and all Muslim nations will definitely stand up to them and not allow the so-called #DealOfCentury to be realized,” Ayatollah Khamenei said in another tweet.

Iranian Foreign Minister Mohammad Javad Zarif also appealed to Muslims saying, "Vision for Peace" looks more like "Highway to Hell". We Muslims need to wake up: The U.S. never was — and can never be — anything resembling an honest broker”.

In a phone conversation with the Secretary General of Islamic Jihad Movement of Palestine Ziyad Al-Nakhaleh, Iranian Parliament Speaker Ali Larijani termed the ‘‘Deal of Century’’ as a ‘treacherous’ plan orchestrated by the U.S. and Israel against the resistance of the oppressed Palestinian nation.

Larijani called on Muslim nations around the globe to support Palestinian people, saying that “with God’s support, the Zionist regime will be expelled from the Palestinian lands and territories.”

The Palestinian leadership rejected the proposal even before its release as the plan is expected to be favorable to Israel, and thousands of Palestinians protested in Gaza, and people across the West Bank and Jerusalem voiced their objection and anger over the contentious plan.

Meanwhile, Israeli Prime Minister Netanyahu has hailed it as a chance to ‘make history’ and define Israel’s final borders.

President Trump endorsed his recognition of Jerusalem as Israel’s capital in December 2017. A move he took in the face of Palestinian demands that the holy city should serve as the capital of their future state. The plan is widely expected to take the US’ pro-Israeli policy to a new level, with various reports warning that it seeks to lay the groundwork for Israel’s annexation of some part of the West Bank, including most of the Jordan Valley.

In recent years, Iran has reportedly lent assistance to Palestinian groups such as HAMAS and Islamic Jihad which are fighting against Israel. In 2012 and 2014, Parliament Speaker Ali Larijani stressed that Iran has also lent military support to some Palestinian groups.

The Iranian supreme leader, Ali Khamenei, has also predicted that Israel will cease to exist in less than 25 years, and some Iranian officials including former President Mahmoud Ahmadinejad have vowed to "wipe Israel off the map".