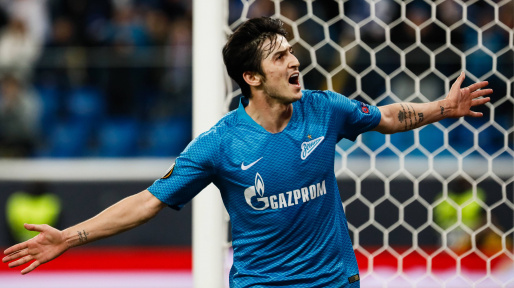 The UEFA Champions League is one of the most prestigious tournaments of its kind in the world that brings together top-division European football clubs.

Saint Petersburg football club Zenit has won a ticket to the group stage of the UEFA Champions League after defeating Lokomotiv Moscow in a Russian Premier League (RPL) match.

Zenit FC, also known as Zenit Saint Petersburg or Zenit, outperformed its rival Lokomotiv Moscow in the 28th round match played at the Krestovsky Stadium on Sunday. The game saw Zenit dominating since the start of the match, which ended with a score of 6:1 in the Saint Petersburg club’s favor.

Zenit players Artem Dzyuba, Serdar Azmun and Malcom Filipe Silva de Oliveira scored goals during the match. A quick-fire hat-trick took Azmun's goal count to 19, putting him ahead of teammate Artem Dzyuba and at the top of the RPL goal-scorers list for the season.

Currently, Gazprom-owned Zenit FC is atop the league standings with a total of 61 points gained over 28 matches of the RPL - the top division of Russian football - placing the team nine points ahead of Lokomotiv Moscow, which has won eight RPL matches in a row.

Zenit secured its first football championship in 1984 when the team won the Soviet Top League, a tournament that preceded the modern-day Russian Premier League. Zenit later claimed victory in the Russian Premier League for the first time in 2007, and saw additional wins in 2010, 2012, 2015, 2019 and 2020.

The 2021-2022 UEFA Champions League is the 67th season of the elite European football tournament, which is scheduled to run from June 22, 2021 until May 2, 2022. Saint Petersburg, Russia’s second-largest city after Moscow, will play host to the final match of what is considered the most prestigious club-level tournament in Europe.

The crucial final match of the UEFA Champions League will take place at the Saint Petersburg Stadium, also known as Gazprom Arena – a retractable roof stadium that serves as a home for Russia’s Zenit football club. The 68,000-seat stadium boasts the second-largest sports complex in Russia after Luzhniki stadium, which seats 81,000.

The UEFA Champions League is one of the most prestigious tournaments of its kind in the world that brings together top-division European football clubs.