Russia’s “Moskva” Cruiser Sinks in Black Sea After Being “Damaged” 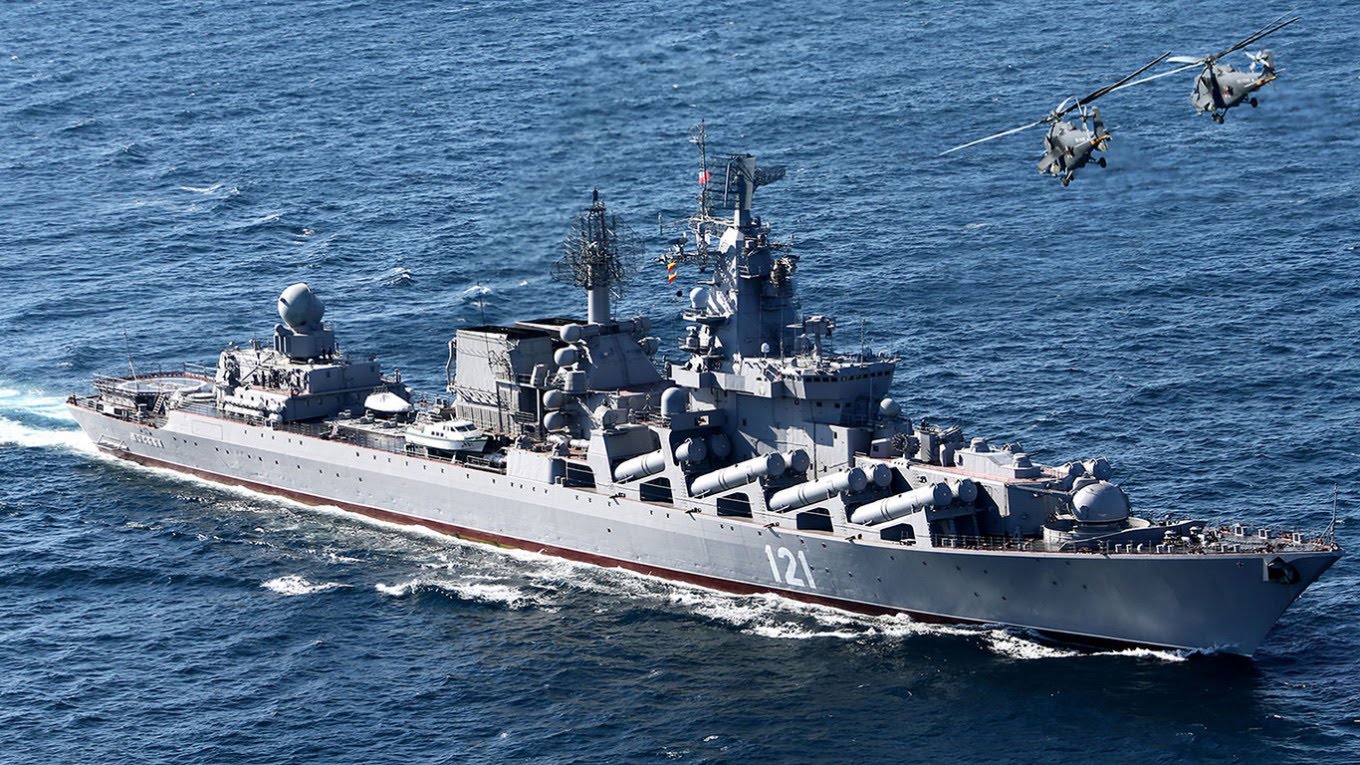 The cruiser Moskva was being hailed as one of the Russian Navy’s most powerful guided-missile warships, which could carry up to 16 longer-ranged P-1000 Vulkan missiles with a 700-kilometer range.

Russia’s defense ministry has said that the country’s guided-missile cruiser “Moskva” sunk Thursday evening while being towed to port after an explosion caused by an unexplained fire.

“The cruiser ship Moskva lost its stability when it was towed to the port because of the damage to the ship’s hull that it received during the fire from the detonation of ammunition,” TASS quoted the ministry as saying on Thursday. “In stormy sea conditions, the ship sank.”

Meanwhile, conflicting reports emerged after the incident involving the warship in the Black Sea.

According to Ukrainian officials, the country’s forces hit the “Moskva” with two R-360 Neptune anti-ship cruise missiles, setting it on fire. The missiles were apparently fired from a land-based launcher near Odesa, while the “Moskva” was located some 60 to 65 nautical miles (100 km) offshore. Some sources reported that the attack was supported by a Bayraktar TB2 combat drone, which distracted the ship’s triple-tiered air defense system. On April 14, the Ukrainian Southern Command claimed that the “Moskva” had capsized and began to sink.

Earlier, officials in Russia denied reports that one of the Russian Navy’s most important warships had sunk and claimed that the fire that broke out on the guided-missile cruiser had been extinguished, without any reference to a Ukrainian strike.

The loss of a $750-million Moskva missile cruiser stroke hard at the heart of the Russian Navy.

“Russia has lost a significant part of its naval capability in the Black Sea, and its ability to hit targets in Ukraine,” independent military analyst Pavel Luzhin told The Moscow Times on Friday.

The cruiser Moskva was being hailed as one of the Russian Navy’s most powerful guided-missile warships, which could carry up to 16 longer-ranged P-1000 Vulkan missiles with a 700-kilometer range. The ship was also fitted with an array of anti-submarine, mine-torpedo and other weapons, including S-300 surface-to-air missiles, AK-130 dual-purpose guns, AK-630 close-in weapon systems, and RBU-6000 anti-submarine mortars.

The 186-meter-long vessel was the third-largest in Russia’s active fleet and crucial to Russian naval power. The 12,500-ton “Moskva” was used as a vital store of defensive weapons and air defense missiles, as well as a hub for coordinating naval attacks.

Since Russia launched an attack on neighboring Ukraine, the cruiser was involved in the widely publicized incident in the vicinity of Ukraine’s Snake Island in the Black Sea when the Russian cruiser hailed the island’s garrison over the radio and demanded its surrender. According to the audio recordings, Ukrainian soldier Roman Hrybov boldly told the warship to “go to hell,” a phrase that has been widely repeated and became a symbol of Ukrainian resistance to Russian military actions.

The “Moskva” missile cruise also provided air defense for Russian units in the early days of the Syrian operation.

After annexing the Crimean Peninsula — a Ukrainian territory on the northern coast of the Black Sea, in 2014, Russia consolidated its strategic position in the sea weakened after the collapse of the Soviet Union. Russia placed new, advanced surface combatants and submarines in the Black Sea Fleet, alongside a massive shore-based buildup of air defense and coastal defense cruise missiles.

Russia’s Navy currently includes 70 submarines, 20 of which are diesel-powered, and the remaining 50 are nuclear-powered, according to Mil.Press Flot. In addition, the country’s Navy maintains 33 large surface warships, more than 100 small surface combat ships and boats, roughly 60 minesweepers, 21 amphibious ships, and two training ships.