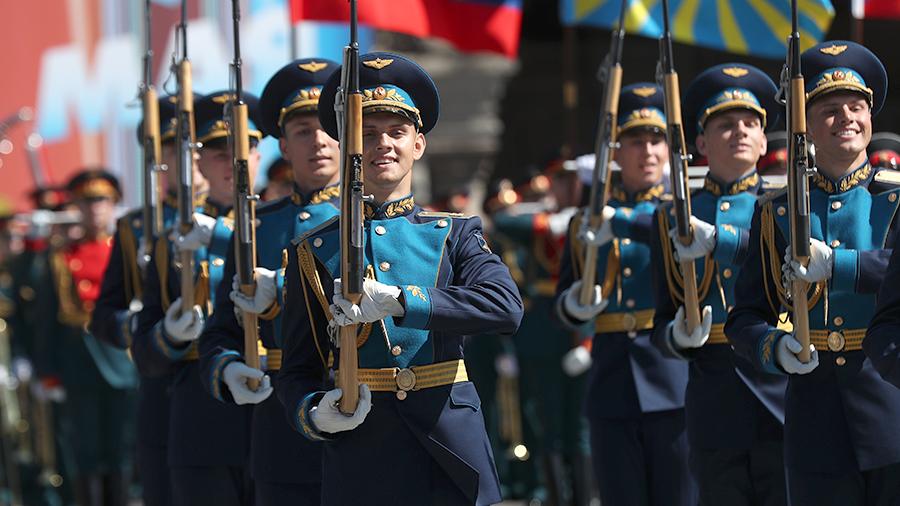 Every year on May 9, hundreds of military vehicles and thousands of troops sweep through Moscow's Red Square to showcase the Russia's military might and the country's newest military equipment during an extravagant annual victory day parade.

Today, millions of Russians around the world are celebrating the 76th anniversary of the Soviet Union's victory over Nazi Germany and an end to the Great Patriotic War, otherwise known as World War II, which claimed the lives of 27 million people from the USSR.

Every year on May 9, hundreds of military vehicles and thousands of troops sweep through Moscow's Red Square to showcase the Russia's military might and the country's newest military equipment during an extravagant annual victory day parade. The parade was postponed last year, when the Russian government made a decision to reschedule the annual military parade from its original date to June 24, due to the Covid-19 pandemic, however, this year's celebrations returned to their usual date.

Celebrations kicked off at 10 am today in Red Square, the heart of Russia's capital, where more than 12,000 servicemen took part and showcased over 190 pieces of military and special equipment and 76 aircraft and helicopters in the parade led by Commander-in-Chief of the Russian Land Forces Colonel General Oleg Salyukov.

As part of the parade ceremony, when the Banner of Victory and the Russian flag appeared in Red Square, Salyukov reported to Defense Minister General of the Army Sergei Shoigu that Moscow garrison troops were ready for Victory Day. Afterwards, Shoigu and Salyukov rode in Aurus cabriolets, which were created specifically for the event by local brand FSUE NAMI, to greet the troops.

This year, the parade was led by a T-34, a legendary tank that played a crucial role in the Great Patriotic War. Russia, the world's second strongest military power, has manufactured cutting-edge military equipment such as the Boomerang armored personnel carriers, as well as the Typhoon armored vehicles and Typhoon-PVO vehicles. These machines were complemented by light armored units manned with infantry personnel, such as the BMP-2 and BMP-3 infantry fighting vehicles equipped with the Berezhok combat module and the advanced Kurganets-25 infantry fighting vehicles.

Spectators also had a chance to see the country’s most powerful intercontinental ballistic missile complexes, such as the Yars, as well as the S-400 anti-aircraft missile system, the Iskander-M missile system and the TOS-1.

The parade ends with the flyover of MiG-31K and Su-57 aircraft and three aerobatic groups — the Lipetsk Aviation Center, as well as the Russian Knights and Strizhi.

Russia's modern armed forces are comprised of the Ground Forces, the Aerospace Forces and the Navy. There are also two independent arms of service, including Strategic Missile Troops and the Airborne Troops.

Global Firepower (GFP), a website that provides data on and ranks national militaries around the world, ranks the Armed Forces of Russia as the strongest in the Caspian region and one of the biggest in the world. According to its 2021 data, GFP identifies Russia as the world’s second strongest military among 140 countries worldwide behind the United States. The defense budget for 2021 is around $42 billion, while the US leads the ranking of countries with the highest military spending accounting for $740.5 billion. Russia's strategic nuclear arsenal, however, remains the main pillar of the Great Power status.

Russia usually invites foreign leaders to attend the parade, however, this year it broke this tradition amid the ongoing escalation with western countries. Meanwhile, most EU member states, including Belgium, Bulgaria, Croatia, the Czech Republic, Denmark, Finland, France, Germany, Greece, Hungary, Ireland, Italy, Luxembourg, Poland, Portugal, Romania, Slovakia, Slovenia, and Sweden, are sending their ambassadors to commemorate the memory of those who fought in World War II.

Russia celebrates Victory Day each year, recalling not just the end but the beginning of the Great Patriotic War, which began on June 22, 1941, when German Nazi forces hit the USSR in a blitzkrieg, or "lightning war." The German invasion of the Soviet Union took the country’s leadership and nearly 200 million inhabitants completely by surprise as it violated the Molotov-Ribbentrop treaty signed between Germany and the Soviet Union in 1939, which had ensured that neither country attacked the other. The Soviet Union spent over $192 billion on the war effort.