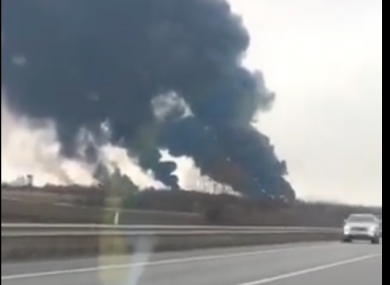 Ukrainian President Volodymyr Zelensky announced on Sunday that the Russian forces have “completely destroyed” the civilian airport in the city of Vinnytsia, which is located around 260 kilometers (160 miles) southwest of the Ukrainian capital Kyiv.

“I’ve just heard the report on the missile strike at Vinnytsia. Eight missiles. Against our city, against our peaceful Vinnytsia, which has never posed a threat to Russia. In any way,” Zelensky said in a video address.

Located in the western area of central Ukraine, Vinnytsia is far from the Russia and Belarus borders, in an area that has seen fewer such strikes. Its closest international border is Moldova.

According to the Ukrainian Air Force Command, a total of eight missiles were launched by strategic bombers like Russia’s Tu-160 Blackjack and Tu-95 Bear in the Black Sea. The missiles have a range of up to 5,500 kilometers.

Russia denies attacking civilian areas. According to the Russian Defense Ministry, the Vinnytsia airport was used for military purposes. However, Ukraine argues that the airport performed both military and civilian functions, adding that it had been under reconstruction for a long time.

Meanwhile, Zelensky has long called for a western military alliance to impose a no-fly zone over Ukraine to halt Russia’s bombing amid the ongoing conflict. However, NATO rejected Ukraine’s request, warning that such a move could provoke widespread war in Europe with Russia.

In his video address, Zelensky reiterated his call for the no-fly zone and stressed the importance of establishing humanitarian aid corridors.

“We repeat everyday: “Close the sky over Ukraine!”. Close it for all Russian missiles, Russian combat aircraft, for all these terrorists. Make a humanitarian air zone. Without rockets, without air bombs. We are people and it is your humanitarian duty to protect us, protect people. And you can do it,” Zelensky urged.

“If you do not do that, if you at least do not give us aircraft for us to be able to protect ourselves, there can be only one conclusion: You also want us to be slowly killed. This is also the responsibility of the world’s politicians, Western leaders,” he added.

However, Russian President Vladimir Putin warned the West of a wider war if a no-fly zone is set up. During his meeting with the female staff of Russia’s national airline Aeroflot ahead of International Women’s Day, Putin said that Russia would consider such a move as an intervention.

“We will consider any move in this direction as participation in the armed conflict of the country from whose territory a threat to our servicemen is created,” Putin said. “We will consider them participants in hostilities that very second.”

On February 21, Russian President Vladimir Putin recognized the so-called Donetsk and Lugansk People’s Republics as independent entities. He signed friendship, cooperation, and mutual assistance agreements with the two separatist territories. On February 24, Russia launched an all-out offensive in Ukraine, claiming that the assault was aimed to protect the people of two self-proclaimed separatist-controlled regions of Ukraine allegedly being attacked by the Ukrainian military. The Kremlin explained that the decision was made after separatist leaders of the so-called republics had asked Moscow for military support against Kyiv.