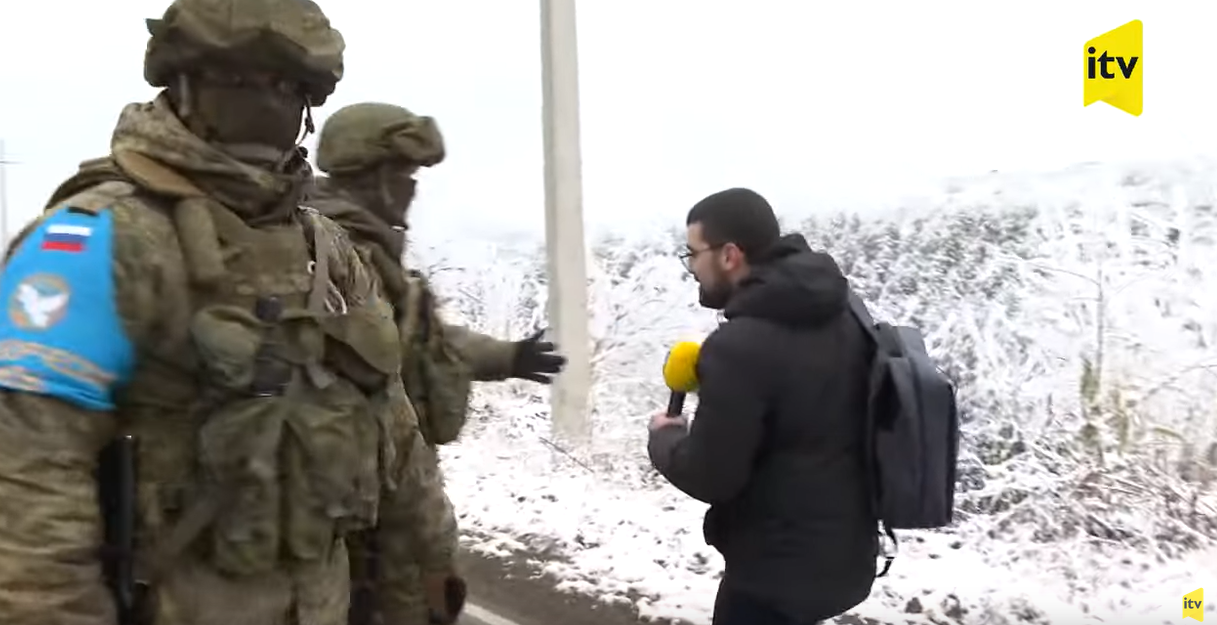 Russian peacekeepers in the Karabakh region of Azerbaijan are at the epicenter of a new scandal after they attempted to block Azerbaijani journalists from doing their job in the sovereign territories of Azerbaijan.

Journalists from Azerbaijan's Public Television (İctimai TV) reported from the Lachin highway on Wednesday that they had been threatened by Russian peacekeeping troops as they tried to pass along the road. Journalist Fikrat Dolukhanov was sent to report on the upcoming meeting of the Azerbaijani ecological monitoring group and the Russian peacekeeping command in the town of Khojaly.

However, in video footage posted on YouTube by the TV channel, he is seen facing restrictions by the peacekeepers.

One of the peacekeepers requested the journalist to leave the Lachin highway. Further, a group of peacekeepers blocked the road to prevent Azerbaijani journalists to continue their walk toward Khojaly. Even though Dolukhanov repeatedly stated that he is an unarmed mass media member who was going to cover the meeting in Khojaly, the armed Russian servicemen continued their attempts to block him.

Earlier this week, a group of experts from Azerbaijan’s Ecology and Natural Resources Ministry, the State Service on Property Issues, and the AzerGold Company met with the Russian peacekeeping command on the Lachin highway to discuss the monitoring of the illegal exploitation of the natural resources in the zones temporarily monitored by the peacekeeping contingent. They have later gone to Khankendi to continue talks in the peacekeepers’ headquarters.

Today’s meeting in Khojaly was the next round of negotiations to highlight the importance of conducting monitoring, property inventory and environmental research in the fields and other relevant locations related to the illegal exploitation of minerals in the territories of Azerbaijan where the Russian peacekeeping forces are temporarily stationed. According to the Azerbaijani media, the talks in Khojaly ended and the Russian peacekeepers have been warned that the illegal exploitation of Azerbaijan’s mineral resources will not be allowed.

The decision to conduct monitoring followed the illegal transportation of minerals from the Azerbaijani territories temporarily monitored by the Russian peacekeepers to Armenia via the Lachin road. Baku-based Caliber.Az news agency has recently reported that eight Kamaz trucks accompanied by a Nissan Patrol SUV with an Armenian license number 731 - AB - 61 ER, made their way from the Khankendi city of Azerbaijan to Armenia between November 10 and November 14. Moreover, on November 16-18, the same vehicles were seen along the Lachin road passing from Armenia to Khankendi.

Armenia and Azerbaijan have been at odds since the late 1980s with the dramatic rise in anti-Azerbaijan sentiments in Armenia, at the center of which stood Armenia's illegal claims for Azerbaijan's historic Karabakh region. Following the Soviet Union’s dissolution in 1991, Armenia kicked off a full-blown military aggression against Azerbaijan. The bloody war until a ceasefire in 1994 saw Armenia occupying 20 percent of Azerbaijan’s internationally recognized territories. Over 30,000 ethnic Azerbaijanis were killed and one million others were forced to leave their homes.

In August of this year, Azerbaijan completed the construction of the all-new road and eventually put it into operation. Following the launch of the new road in August, Azerbaijan reclaimed control over the city of Lachin and two surrounding villages to ultimately restore its sovereignty over the entire Lachin district.

However, numerous reports have surfaced about illegal shipments and visitors passing through the Lachin highway, which are meant to be prevented by the Russian peacekeepers.

Earlier this month, 14 citizens of Iran were reported to have illegally traveled to the Karabakh region of Azerbaijan through the Lachin highway. Russian peacekeeping commander General Volkov claimed that the individuals in question were construction workers. However, according to data reported by Azerbaijani mass media, travelers from Iran were saboteurs tasked with conducting training for the separatists in certain parts of the Karabakh region of Azerbaijan.

Meanwhile, on Wednesday, 13 more people from Iran were reported to have entered the Karabakh region through the Lachin road.