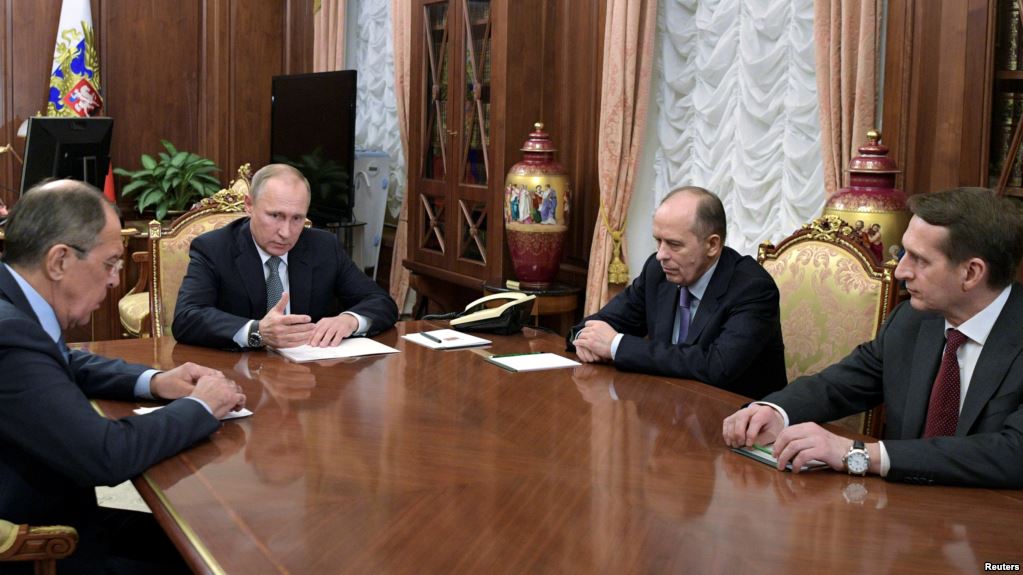 The director of the Russian Foreign Intelligence Service, also known by the abbreviation “SVR,” said on Wednesday that it will still be able to carry out its activities abroad despite the mass expulsion of Russian diplomats in North America and Europe.

"The Foreign Intelligence Service has a very wide set of tools for carrying out intelligence activities that enables the service to carry out the tasks vested in it in terms of protecting the interests of our country and our citizens worldwide," SVR director Sergei Naryshkin was quoted saying by the state-owned RIA Novosti news agency.

Naryshkin said there were "only a few" intelligence officers among the diplomats kicked out by foreign nations, which came in the wake of the poisoning of a former spy, Sergei Skripal, and his daughter, in Salisbury, Britain, on March 4.

"The Foreign Ministry employees include official representatives of our service, security officers - only a few. These are people who were officially present in those countries as SVR employees cooperating with the security services of those countries through the so-called partnership channel," Naryshkin told Interfax.

The SVR boss described the expulsions as a "dirty, cynical provocation by a known group of countries, trying to create an atmosphere of Russophobia,” reiterating other Russian officials’ line that a "tough" response will follow the expulsions.

Earlier this week, the U.S. and several European countries expelled dozens of Russian diplomats in a coordinated response to the poisoning of the Skripals in the U.K.

In the wake of the British government’s decision to declare 23 Russian diplomats persona non grata, several EU countries, Ukraine, Canada and the U.S. were in lock-step with their British ally and also kicked out diplomats.

The Kremlin has already put blame on leaders in Westminster, posting a statement to the foreign ministry website that claims the British government routinely fails to protect Russian citizens on British soil.

Russian officials cited previous examples of deaths of Russians in the U.K., like former Russian Federal Security Service employee Aleksandr Litvinenko, who was killed as a result of poisoning. Russian businessmen Badri Patarkatsishvili and Aleksandr Perepilichny were also found dead, as well as Boris Berezovsky who mysteriously died along with his business partner Nikolai Glushkov.

Moscow went further and blamed London for neglecting all norms of international law, ethics and common sense, and avoiding cooperation over the latest poisoning case.

According to the Russian government, the U.K. has not provided any evidence or laid out a concrete description of what happened. The foreign ministry also held the U.K. responsible for instigating what it believes to be groundless expulsions of Russian diplomats from North America and Europe, ignoring Russia’s “legitimate demands that samples of the used substance be shared with it” for investigation.

On 16 March, the statement reads, the Russian Investigations Committee launched a criminal case into the attempt at pre-meditated murder of Russian citizen Y. Skripal and asked the British side for tangible cooperation.

The Russian Foreign Ministry accused London for orchestrating a worldwide campaign that it said is aimed at creating a complete presumption of guilt towards Russia. A conscious, deliberate effort to escalate the confrontation as well as a show of force on Russian borders is under way. There is a clear pattern of efforts being made to undermine any political and diplomatic cooperation aimed at an objective and multilateral investigation of the incident in Salisbury, it added.

The statement further said that an exhaustive analysis of the circumstances indicates that the British government is not interested in establishing the real motives and identity of the perpetrators of the crime, and “makes us believe that the British intelligence services were complicit in it”.

If Russia is not provided with convincing evidence of the opposite, we will take the view that this was an attempt on the lives or our fellow citizens resulting from a major staged act of political provocation, the statement said, adding that the burden of proof in this case is on no one else’s but Britain’s.

Also Speaker of Russia's upper house of parliament Valentina Matviyenko reiterated Moscow’s pledge to respond to the expulsions of its diplomats.

"Undoubtedly, as is customary in diplomatic practice, Russia will give a symmetric response to the expulsions and will observe parity in the number of diplomats with those countries which have taken the decision," she said.

In a fresh reaction to the poisoning case, the Russian presidential spokesman said the Kremlin does not consider Russia's take on the poisoning as a "dead end" approach.

Asked whether Russia considered its stance on the Skripal case a "dead end path" in view of the expulsions, Peskov said: "No, I don't think so. Twenty or thirty countries are only a part of the world community. The world community is much more varied and includes a greater number of countries."