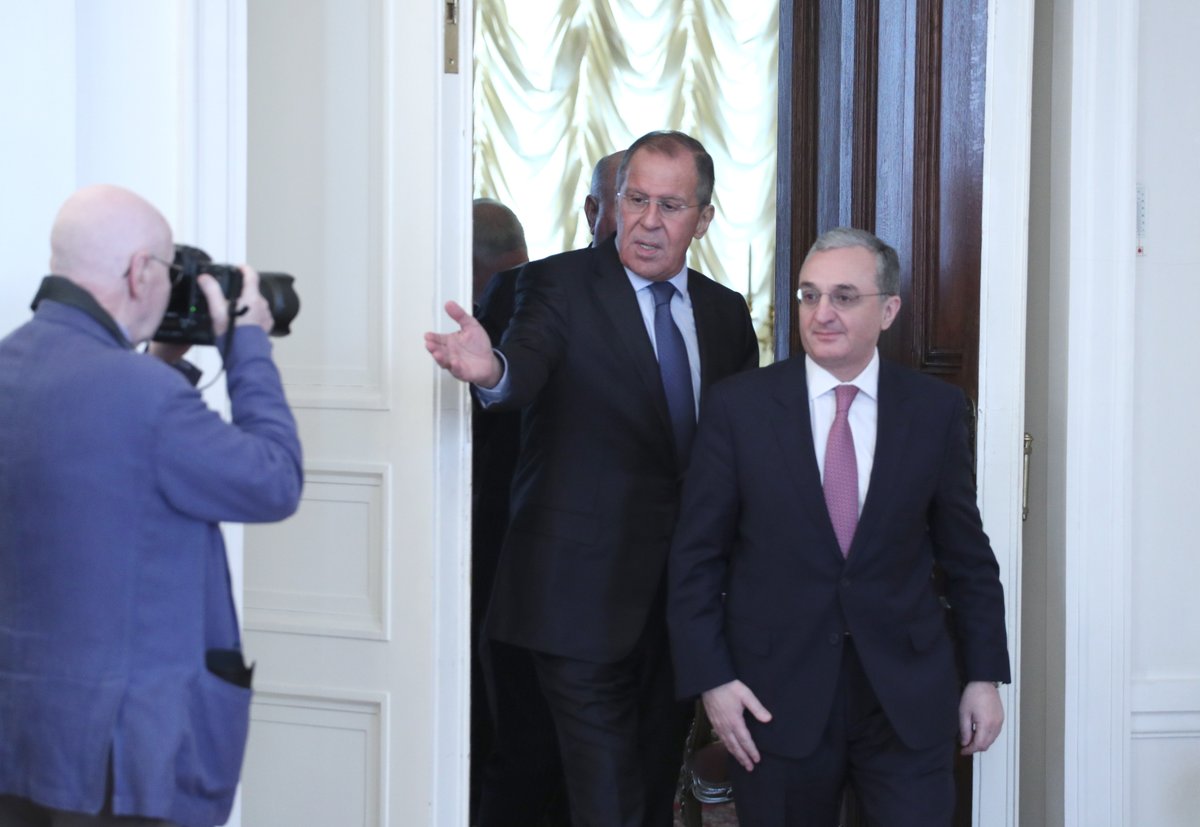 Russian Foreign Minister Sergei Lavrov has called for continued negotiations between Azerbaijan and Armenia and voiced Russia's support for a "phased solution" to resolve the long-standing conflict.

In a roundtable discussion with local diplomats on April 21, Lavrov addressed the crucial steps to settling the conflict, which include conditions outlined in the document adopted during the negotiations on the Nagorno-Karabakh conflict in Moscow in April 2019 and the liberation of occupied Azerbaijani lands.

“I believe that at the first stage - the solution of the most pressing problems, the liberation of a number of districts around Nagorno-Karabakh and the unblocking of transport, economic and other communications,” Lavrov told participants of the Public Diplomacy Support Fund n.a. A.M. Gorchakova during the event, according to Russian media.

“We started to agree, we need to agree. This is what we are seeking as co-chairs of the OSCE Minsk Group.”

The joint statement between the foreign ministers of Azerbaijan and Armenia in Moscow reaffirmed the countries’ intentions to continue their efforts to find a political end to the Nagorno-Karabakh conflict. It has also addressed a further stabilization of the situation in the conflict zone, in particular during agricultural activities, the adoption of measures for allowing families access to relatives held in custody in the respective detention centers on both sides and implementation of concrete work on establishing contacts between people, including through mutual visits of media representatives.

Russia, along with the US and France, has been co-chairing the Minsk Group of the Organization for Security and Cooperation in Europe (OSCE), which aims to help Armenia and Azerbaijan find a political solution to the Nagorno-Karabakh conflict. However, the shuttle diplomacy over the last 26 years has not yielded any tangible results or progress in bringing the conflict to an end.

Lavrov’s remarks were met with a fierce backlash from his Armenian counterpart Zohrab Mnatsakanyan, who rejected the phased settlement idea in a statement saying Armenia is not considering any compromise on the matter of liberating occupied Azerbaijani territories.

“There has never been and will not be concessions, the Armenian side will by no means be guided by an approach that implies a threat to the population of Nagorno-Karabakh,” Mnatsakanyan said, according to 1news.az. “At the same time, the Armenian authorities do not have a mandate from the people of Artsakh [Armenian population of Azerbaijan’s Nagorno-Karabakh region].”

In response to the Armenian minister’s remarks, the Foreign Ministry of Russia issued a statement on Friday explaining that the issues of the Nagorno-Karabakh settlement should be considered within the framework of the existing format.

The statement reads that Russia’s position as a co-chairing country of the OSCE Minsk Group has been repeatedly communicated in joint statements by the top leaders of Russia, the US, and France, adding that the position is based on the fundamental principles of the Helsinki Final Act, including the principles of the non-use of force, territorial integrity and the right to self-determination.

“Among the elements of the settlement contained in these statements are the return of the territories located around Nagorno-Karabakh, as well as the determination of the final legal status of Nagorno-Karabakh by the will of the population,” the ministry said in a statement, according to Haqqin.az.

“As for the documents and proposals that were considered and are being considered, the Minister of Foreign Affairs of the Russian Federation Sergey Lavrov listed them," the statement added.

The 62-page Helsinki Final Act of the OSCE sets the main principles of guiding relations between the participating states, including sovereign equality, respect for the rights inherent in sovereignty, refraining from the threat or use of force, inviolability of frontiers, territorial integrity of states, peaceful settlement of disputes, and others. The Madrid Principles, one of the peace settlement instruments proposed for the Nagorno-Karabakh conflict in 2007, is based on the fundamental principles outlined in the Helsinki Final Act.

Armenia has violated the principles of the Act with encroaching on Azerbaijan’s territory following the dissolution of the USSR in 1991. Armenia's full-fledged military aggression against Azerbaijan led to bloody war until a ceasefire in 1994. Azerbaijan’s Nagorno-Karabakh region and seven surrounding districts – Lachin, Kalbajar, Aghdam, Fuzuli, Jabrayil, Gubadli, and Zangilan were occupied, 30,000 ethnic Azerbaijanis were killed and one million was displaced by Armenia as a result of the war.

Political analyst, head of the Atlas Research Center in Baku, Elkhan Shahinoglu says the phased resolution format is an opportunity for Armenia to free itself from the ongoing economic isolation.

“Armenia is under the influence of Russia. In the current difficult situation with the spread of the coronavirus, Armenia needs more help and support from Russia. In fact, in these difficult times, the 'step-by-step solution' plan is a chance for Armenia,” Shahinoglu told Caspian News.

“Armenia is already in a difficult economic situation due to the coronavirus, its borders are completely closed and it is unknown when it will open. Armenia's readiness for reconciliation with Azerbaijan and Turkey gives it the prospect of escaping the war it fears and joining regional cooperation. However, it is difficult to say that Yerevan will use this opportunity," Shahinoglu added.

Lavrov's comments came on the same day that the foreign ministers of Azerbaijan and Armenia held a virtual meeting to discuss next  steps in negotiations to resolve the ongoing conflict. Although the meeting failed to produce any tangible progress, both ministers agreed that the two countries should resume political negotiations as soon as possible with the aim of reaching a solution to the conflict pursuant to the joint statement issued in Geneva on 30 January 2020.