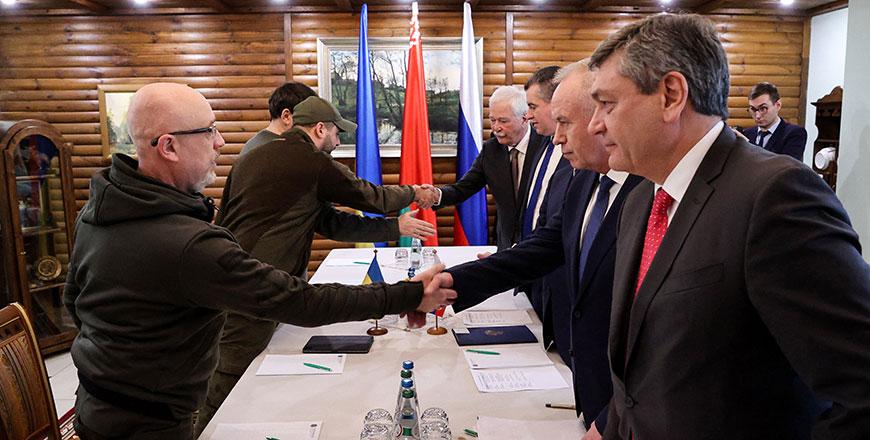 Ukrainian Defense Minister Oleksii Reznikov (left) shakes hands with Russian negotiator prior to the second round of talks between delegations from Ukraine and Russia in Belarus' Brest region on Thursday. / AFP Photo

The second round of Russia-Ukraine talks aimed at ending the fighting between Moscow and its neighbor have concluded with the two sides agreeing on a tentative plan to create a humanitarian corridor for civilians.

The face-to-face discussions took place near the Belarus-Ukraine border on Thursday as Russia’s advance on Ukrainian cities intensified after initial talks on Monday ended without agreement.

An aide to Ukraine’s President Volodymyr Zelensky said although talks with Russian officials failed to reach the results Kyiv hoped for, the two sides have discussed humanitarian corridors to help civilians escape the escalating war.

“That is, there may be a ceasefire not everywhere, but only in those places where there will be humanitarian corridors for the period of the evacuation,” Ukrinform quoted Mykhailo Podolyak, an adviser to the Ukrainian presidential office, as saying at a briefing.

Following the discussions, the parties came to an understanding on the delivery of medicines and food to the places where intense fighting was taking place, according to Podolyak.

“To this end, special communications and interaction channels will be organized in the near future, appropriate logistics procedures will be formed,” he said.

According to Leonid Slutsky, one of the members of the Russian delegation, another round of talks between the parties will happen in the near future. His comments came during an interview with news channel Russia 24.

According to United Nations reports, more than one million Ukrainians have fled their homes since the start of Russia’s invasion, which was already dubbed the biggest assault on a European state since World War II.

Russia’s troops entered the country on February 24, claiming that the assault was aimed to protect the people of two self-proclaimed separatist-controlled regions of Ukraine allegedly being attacked by the Ukrainian military. Yet, the Russian advance has made slower progress than most military analysts had expected, mostly due to fierce Ukrainian resistance.

As of March 3, Russia had launched more than 480 missiles at Ukrainian targets, including homes and civilian infrastructure, according to the Pentagon. More than 70 of them have been fired from Belarus.

Following the clashes, Russian forces have seized control of the decommissioned Chernobyl nuclear plant and surrounding exclusion zone in northernmost Ukraine, close to the Belarusian border and just 132 kilometers from Kyiv. Russian troops also captured Berdyansk, a port city on the Sea of Azov.

On Thursday, Russian troops gained control of a key port city in Ukraine. Located in southern Ukraine, Kherson sits above the delta of the Dnieper River, which flows into the Black Sea. The fall of Kherson, which is home to about 300,000 people, has strategic importance because it will allow the Russian military to amass there as a launching post to push its forces further inland.

Since the invasion began last Thursday, more than 2,000 Ukrainian civilians have been killed, Ukraine’s State Emergency Service said Wednesday. Russia has acknowledged for the first time that it has suffered losses. On Wednesday, Russia’s Ministry of Defense said that 498 Russian troops have been killed in Ukraine and 1,597 more were reported as injured. According to Ukrainian official, over 7,000 Russian troops had been killed in the ongoing war.

Ukraine and Russia, the two post-Soviet countries, have been at odds since the 2014 crisis in Ukraine’s southern and eastern regions. Ukraine accuses Russia of annexing the Crimean Peninsula – a territory that extends into the Black Sea – and backing anti-government separatist regimes in the country’s eastern regions of Donetsk and Lugansk. Since then, the crisis has destabilized the Donetsk and Lugansk regions – collectively known as Donbas. Kyiv and the West have accused Russia of supporting the separatist regimes in Donetsk and Lugansk with weapons and troops.