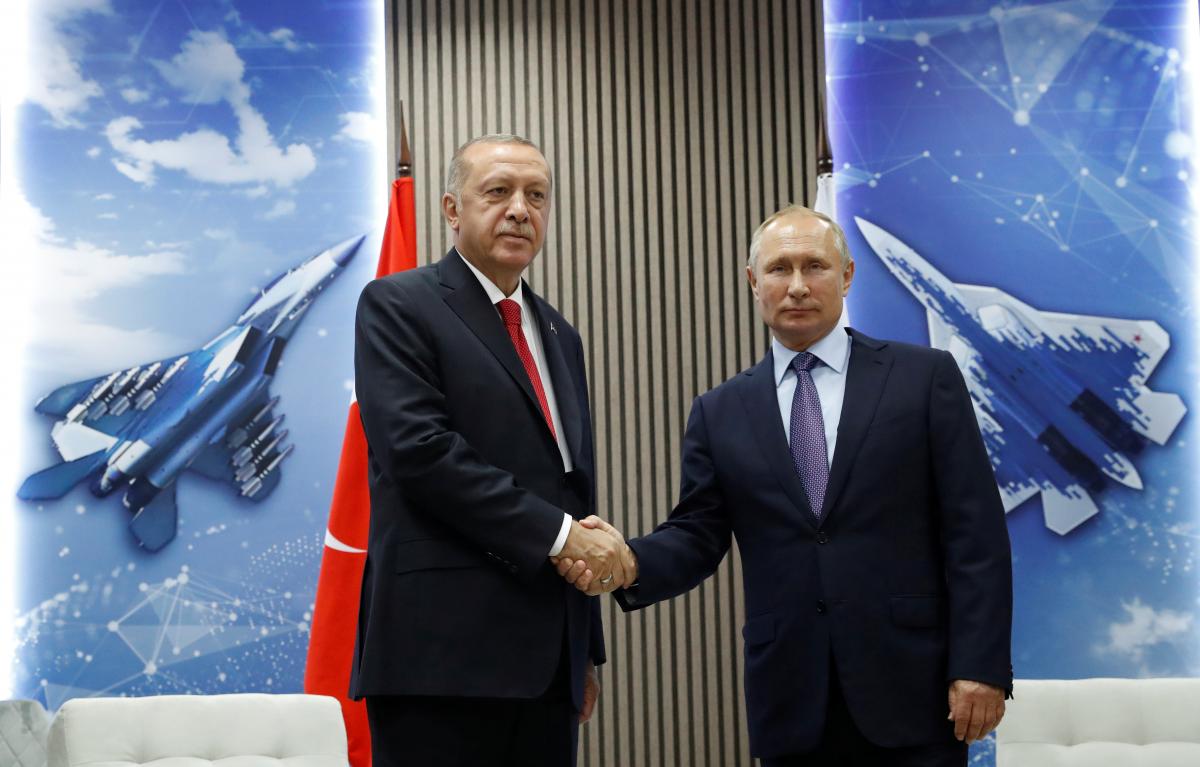 Russian President Vladimir Putin and Turkish President Recep Tayyip Erdogan speak during their meeting on the sidelines of the MAKS-2019 International Aviation and Space Salon in Zhukovsky outside Moscow, Russia. / Reuters

As tensions in Idlib, Syria mount, Russia and Turkey have agreed to take joints steps towards normalization, following a meeting between Turkish President Recep Tayyip Erdogan and Russian President Vladimir Putin at a military airshow outside Moscow earlier this week.

“Together with Turkey’s president, we have outlined additional joint steps to neutralize the terrorists’ nests in Idlib and normalize the situation there and in the whole of Syria as a result,” RIA Novosti quoted President Putin as saying earlier this week.

The situation in the northwestern Syrian region of Idlib – the last bastion for rebel and jihadist groups that have been trying to overthrow President Bashar Al Assad in a civil war that is in its ninth year – has gotten worse. Reports indicate that attacks in the area supposed to be under a ceasefire have intensified.

Putin emphasized that Russia and Turkey reaffirm their adherence to the sovereignty and territorial integrity of Syria, and are alarmed by the situation in the de-escalation zone.

“Terrorists continue shelling the positions of Syrian government forces, trying to attack Russian military installations,” Putin said. “The de-escalation zone must not serve as a refuge for militants, let alone a bridgehead for new attacks.”

Turkey, along with Iran and Russia, is considered a guarantor of what has been dubbed the Astana process, which has tried to broker a ceasefire and political settlement of the Syria conflict that includes representatives of all factions to the conflict. Both Russia and Iran have backed the Assad regime, who has been waging a civil war since the spring of 2011, while Turkey has reportedly supported some opposition factions in the northwestern Idlib region.

Speaking alongside his Russian counterpart, President Erdogan condemned the Syrian government for the escalation in the region, which is supposed to be protected from a massive offensive by a buffer zone deal signed between Russia and Turkey back in September 2018.

On August 19, Syrian air forces attacked a Turkish military convoy en route to Idlib province’s Khan Shaykhun, a town of strategic significance for the Syrian government that sits on a key highway linking the large northern city of Aleppo to the capital of Damascus, and has been used as a major rebel supply route. The Turkish Defense Ministry said the convoy was headed to one of 12 observation posts in Idlib.

“It is unacceptable that the regime spreads death both from land and air under the pretext of fighting terrorism,” Hurriyet Daily News quoted Erdogan as saying at the joint press conference. The Turkish leader expressed his concerns that the regime’s attacks, which have claimed lives of more than 500 civilians and injured more than 1,200 people since May, may lead to “humanitarian crisis” in the region.

Meanwhile, Russian analyst Boris Dolgov, a senior researcher in the Institute of Oriental Studies of the Russian Academy of Science, believes that the real stabilization in the region can be achieved only if the Syrian forces take the de-escalation zone under its control.

“I think Ankara will take into account Syria’s interests related to maintaining its own territorial integrity and sovereignty, and, of course, [the interests of] the Russian Federation, who fights for peace and defeating terrorism in the Arab Republic” analyst told on Wednesday in an interview with the Federal New Agency, commenting on Erdogan’s visit.