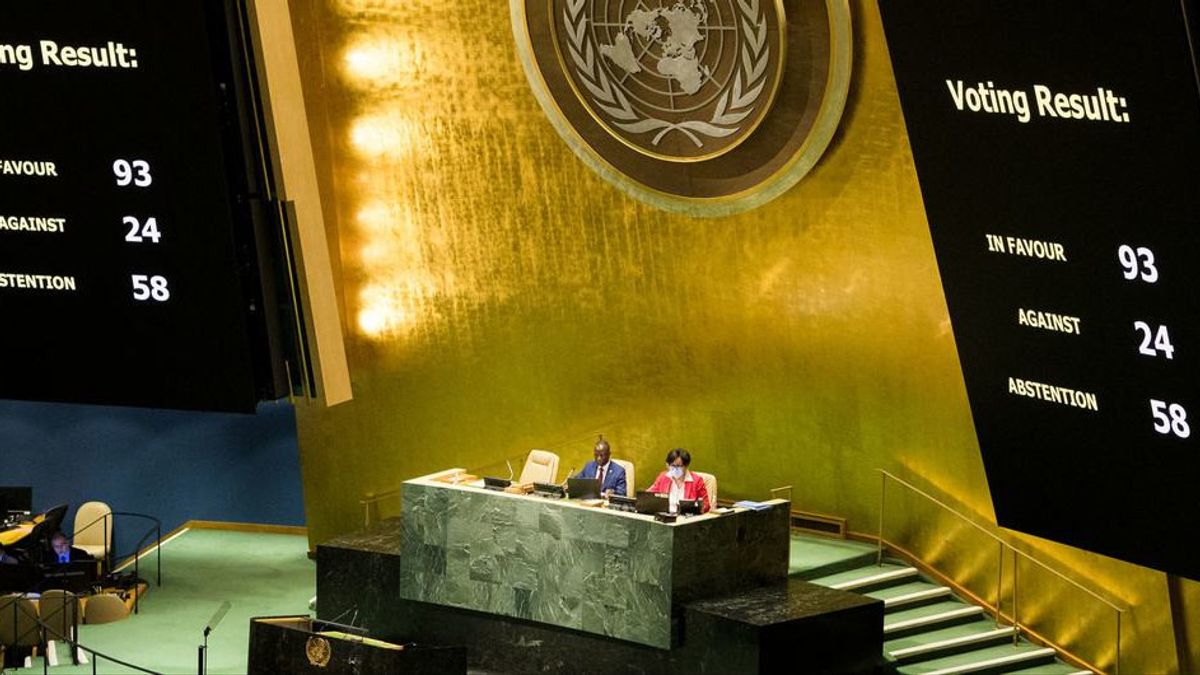 The proposal, introduced by the US ambassador to the UN, Linda Thomas-Greenfield, earlier this week, followed atrocities that emerged on the outskirts of Ukraine’s capital. Bodies of Ukrainian civilians were discovered in the wake of Russia’s military retreat from the town of Bucha.

The United Nations General Assembly has voted to suspend Russia from the Human Rights Council over reports of “gross and systematic violations and abuses of human rights” and “violations of international humanitarian law” by Russian troops in Ukraine.

At a meeting of the UN General Assembly on Thursday, a total of 93 members backed the resolution on the suspension of Russia’s membership in the UN human rights body, while 24 voted against it and 58 abstained.

The proposal, introduced by the US ambassador to the UN, Linda Thomas-Greenfield, earlier this week, followed atrocities that emerged on the outskirts of Ukraine’s capital. Bodies of Ukrainian civilians were discovered in the wake of Russia’s military retreat from the town of Bucha. The deaths have sparked global outrage and calls for tougher sanctions on Russia, which has vehemently denied its troops were responsible.

“Right now, the world is looking to us; they are asking if the United Nations is prepared to meet this moment,” she said in her remarks at a UN General Assembly Emergency Special Session issued on Thursday.

“They are wondering if we are a platform for propaganda and a safe haven for human rights abuses, or, if we are prepared to live up to our highest ideals, enshrined in the UN Charter,” she added.

The Geneva-based inter-governmental body within the United Nations system consists of 47 members and is responsible for the promotion and protection of all human rights around the globe.

Russia joined the body in January 2021 as one of 15 countries elected by the General Assembly to serve three-year terms.

Shortly after Thursday’s vote in New York, Russia’s deputy ambassador to the UN, Gennady Kuzmin, announced that Russia will withdraw from the UN Human Rights Council before the end of its term, describing the resolution as “an illegitimate and politically motivated step.”

Kuzmin said it served “as a demonstrative punishment of a sovereign UN member state with an independent domestic and foreign policy.”

China, which was among the countries that voted against the resolution, voiced concerns over Thursday’s move in the General Assembly, arguing that such a hasty move would be like “adding fuel to the fire.”

“Dealing with the membership of the Human Rights Council in such a way will set a new dangerous precedent, further intensify confrontation in the field of human rights, bringing a greater impact on the UN governance system, and produce serious consequences,” China’s UN ambassador Zhang Jun said.

The Russian invasion sparked renewed global outrage as shocking images from the Ukrainian town of Bucha showed the bodies of civilians with close-range gunshot wounds strewn along deserted streets, some with their hands tied behind their backs. Mass graves containing nearly 300 civilians were also found near the Ukrainian town of Bucha after Russian troops withdrew from the area. Ukraine and western leaders have accused Moscow of war crimes.

On its part, Russia denied accusations, arguing that all photographs and footage showing dead bodies were “yet another provocation.”

The ongoing tension between the EU and Russia over the war in Ukraine has pressured European leaders to impose another package of sanctions — the fifth in a row since the start of what Moscow described as a “special military operation.”