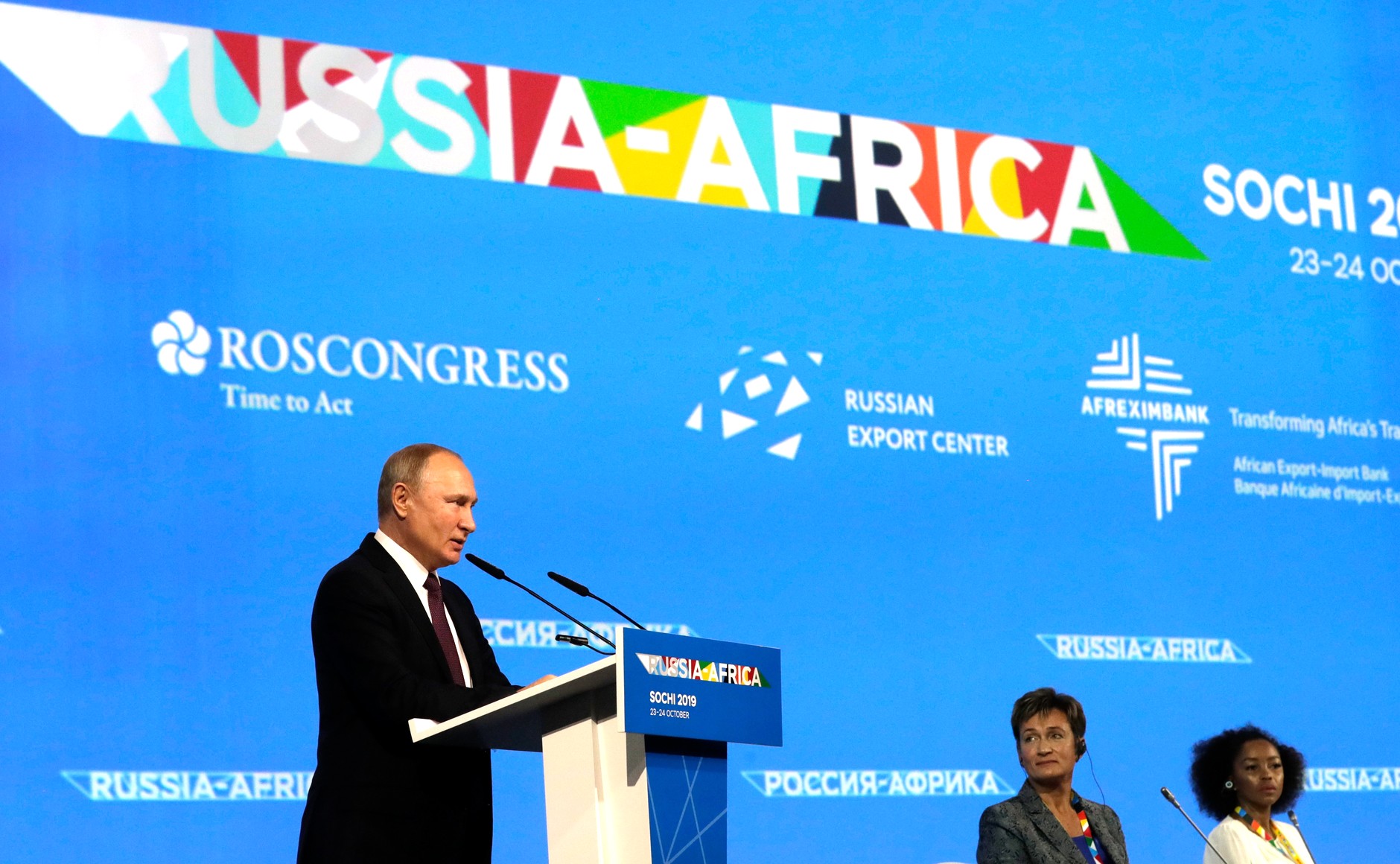 The event lasted from October 23-24 and saw governmental and business officials representing 54 African nations, in Sochi, a coastal resort city in Russia. The forum was co-chaired by President Putin and Abdel Fattah El-Sisi, his Egyptian counterpart who also chairs African Union. / kremlin.ru

Officials in Russia have announced the country’s intent to build stronger economic ties with Africa amid tough economic sanctions that affect the Caspian region’s largest and wealthiest economy.

“Expanding and simplifying mutually beneficial ties with African states are among Russia’s foreign policy priorities,” said President Vladimir Putin at the Russia-Africa Economic Forum, according to a statement published to the president’s official website.

“The discussions and presentations by key Russian companies, as well as specific sessions focusing on particular areas of cooperation have shown that Russian and African business circles are interested in expanding mutually beneficial ties,” he added.

The event lasted from October 23-24 and saw governmental and business officials representing 54 African nations, in Sochi, a coastal resort city in Russia. The forum was co-chaired by President Putin and Abdel Fattah El-Sisi, his Egyptian counterpart who also chairs African Union.

As the first major gathering of African leaders in Russia since the collapse of the Soviet Union in 1991, the forum was expected to serve as an important platform for face-to-face discussions between politicians, business executives and experts to develop joint projects across the two continents.

The event comes at a time when the Russian economy is going through hard times as a result of low oil prices and soared relations with the West after the White House imposed a series of sanctions against Moscow. Adopted in 2017 and dubbed the Countering America’s Adversaries Through Sanctions Act (CAATSA), the measure is supposed to threaten any country engaged in any transaction with Russian defense and intelligence sectors.

Meanwhile, the forum reportedly resulted in more than $12 billion in trade deals after African delegations struck agreements with Russian businesses.

“The total amount of only those [documents] that we know about as of the moment is more than 800 billion rubles,” said Anton Kobyakov, Russian Presidential Adviser, according to a report by RBC.

He then added that more than 50 contracts were signed in total.

Over the past five years, the mutual trade between Russia and the African countries has more than doubled and exceeded $20 billion. But President Putin believes this is not enough for these relations.

“After all, ladies and gentlemen, keep in mind that Egypt accounts for $7.7 billion, or 40 percent, of these $20 billion. We have many potential partners in Africa, lots of them. They have good development prospects and enormous growth potential. Of course, this is not enough,” the Russian president said, according to a report by Kremlin.

The list of Russia’s largest trading partners in Africa currently includes Egypt, South Africa, Zambia, Morocco, Algeria, Nigeria and Kenya, according to the Centre for Research on Globalization (CRG), a Canada-based independent research and media organization.

The projects implemented by Russia on the African continent are mining projects in Zimbabwe and Sierra Leone, as well as the construction and modernization of industrial infrastructure in Zambia and Angola. The initiatives are co-operated by the Russian Expo Center and African Export-Import Bank, also known as Afreximbank.